With Canada heading for a recession and the Conservatives at historical lows in polls, Stephen Harper appears to be trying out a new strategy: scare everyone and call his opponents "risky!"

It was bad enough when they used traumatizing footage from the executions of actual human beings for their latest attack ad, borrowing video from what Defence Minister Jason Kenney had previously described as "brutal terrorist snuff videos."

Now, Harper is portraying himself as an "island of stability" while claiming the opposition is "reckless" and full of "risks." Finance Minister Joe Oliver is even roaming the countryside fear-mongering about the opposition's "risky" economic measures.

Risky? Really? Do the Conservatives really want to get into a discussion about the "risks" of re-electing Conservatives?

1. The risk that the Conservative economic policy of crossing their fingers and hoping things get better will not, in fact, work out

Oliver declared on Wednesday that Canada "must stay the course," which is another way of saying cross our fingers and hope the price of oil goes back up. But with oil prices taking another dive, forecasts for Alberta's oil sector are "even worse."

Meanwhile, doing nothing may actually be putting Canada into a recession. The International Monetary Fund's latest report released Thursday reinforces this sense that we're heading for a recession when it cut Canada's growth forecast.

Meanwhile, multiple sectors in the Canadian economy have contracted and manufacturing remains "pretty weak."  And a new report suggests the Conservatives' single-minded focus on fossil fuels is causing Canada to lose out on billions in the emerging clean technology sector.

2. The risk of letting someone who keeps sabotaging international climate deals go to the Paris Climate Conference

Who thinks putting the future of the planet in Harper's hands sounds like a smart idea?

The Harper government has been repeatedly accused of sabotaging international climate agreements -- most recently collaborating with Japan to delay G-7 efforts aimed at decarbonizing the global economy.

And a re-elected Harper government would be responsible for tapping a delegation to represent Canada at the 2015 Paris Climate Conference -- billed as a last-ditch effort to cut greenhouse gas emissions and mitigate the impact of climate change.

3. The risk of seeing more of Harper's friends hauled off to jail

Harper's former Parliamentary Secretary Dean Del Mastro has been convicted for election fraud, Mike Duffy is standing trial and about a dozen others connected to Harper are under investigation or awaiting trial too.

Who will be next?

4. The risk that more Conservative friends, donors and wedding guests will be given cushy jobs

You'll recall that Justice Minister Peter MacKay appointed his best man, that man's wife, and several others with personal and conservative connections to the bench.

Well, this week we learned that some of the government's 98 recent appointees have histories with the Conservatives too, including failed candidates, donors, the president of a conservative-leaning party in Saskatchewan and even MacKay's former judicial adviser.

5. The risk that Conservatives will cover-up their own crimes

Last month, Canada's information commissioner Suzanne Legault made stunning allegations that the Conservatives buried a provision into their last omnibus budget bill that retroactively rewrote the law to absolve the RCMP of any wrongdoing in withholding and destroying the gun registry data. Legault said charges should be laid against the RCMP. 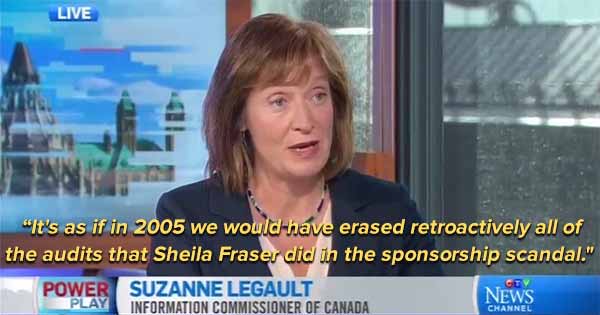 6. The risk of not knowing whether Canada's Defence Minister has his facts straight at any given moment

Back in March, Defence Minister Jason Kenney tweeted images of Muslim women in chains he said were victims of ISIS. In fact, the images turned out to be phony:

On #IWD2015, thank-you to the @CanadianForces for joining the fight against #ISIL's campaign to enslave women & girls pic.twitter.com/PyVHHrhLD7

Also, Kenney's claim that the HMCS Fredericton was confronted by Russian warships buzzed by fighter jets in the Black Sea was contradicted by NATO commanders and his claim that only Canada and the United States possess "smart bombs" was at odds with statements by US military leaders.

7. The risk that Conservatives will continue passing unconstitutional laws

The Conservatives have seen multiple laws struck down by the Supreme Court, with likely more on their way.

This includes C-51, which has been criticized as infringing on free speech and slammed as likely unconstitutional by, among others, the Canadian Bar Association. A former member of the review body of Canada's spy agency also called C-51 a "constitutional mess."

8. The risk that the principle of "Rule of Law" could be dismissed just by using "air quotes"

Speaking of C-51, there was also the time Conservative MP Diane Ablonczy used "air quotes" to dismiss an amendment proposed by the Canadian Bar Association that "Bill C-51 be amended to ensure that they align with the fundamental role of Canada's judiciary in upholding the Rule of Law and Canada's constitutional guarantees."

"Now the judge has to also consider ... something like 'rule of law', they have to consider things like 'principles of fundamental justice,' whatever that is."

9. The risk that Conservative MP Jeff Watson will continue to be entrusted with rail safety

Forty-seven people died in when a train carrying crude oil derailed and crashed into Lac-Mégantic, Quebec.

Do you think Watson bothered reading the report that blamed his own department before going on TV to applaud the Conservatives' safety record? 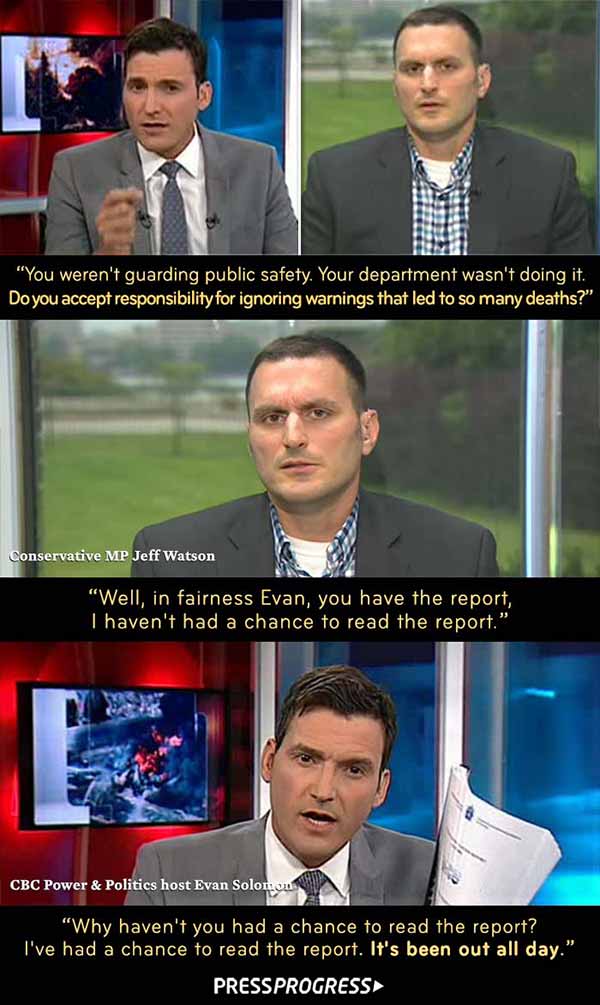 10. The risk that voter suppression will deny Canadians their right to vote

Canada's Chief Electoral Officer has said provisions in the Conservatives' so-called Fair Election Act "will certainly have taken away the ability of many qualified electors to vote."

Plus, the elections expert that Democratic Reform Minister Pierre Poilievre cited in defence of his voter suppression bill said Poilievre never spoke with him. Oh, and "you're looking at at least a quarter million people who won't be able to vote" thanks to the Conservatives' new election law, said Harry Neufeld.

"Common sense has won the day," Poilievre later remarked of the law -- currently being challenged as unconstitutional in court.

Sound risky to you?

In the mean time, here's where you can register to vote.