It's said the best way to avoid repeating history is by learning history.

Yet even today, few Canadians seem to know the full and truthful extent of the country's Indian Residential Schools.

That's one reason the Truth and Reconciliation's final report released Tuesday calls for Canadian schools to develop and implement curricula aimed at teaching Indigenous languages and cultures, particularly "the history and legacy of residential schools."

Thanks to the commission's work, the violent abuse of residential school survivors is now well-documented.

But some still refuse to acknowledge the residential school program's role in a larger strategy of suppressing and assimilating Indigenous languages and cultures – what the commission explicitly calls an attempt at "cultural genocide."

This despite Duncan Campbell Scott, architect of the residential school program, describing his own goal as trying to "get rid of the Indian problem" by continuing "until there is not a single Indian in Canada that has not been absorbed into the body politic."

Here are 14 stories from survivors included in the Truth and Reconciliation's final report underlining how the residential schools attempted to erase the identities of Indigenous students:

Rachel Chakasim remembers the first thing that happened to her on her first day at a residential school was to re-mould her image:

"I remember how they took our clothes, the clothes that we wore when we left, and they also cut our hair. We had short hair from there on. And they put a chemical on our hair, which was some kind of a white powder."

Lydia Ross remembers how administrative numbers were "used on a daily basis instead of names":

"So even though I was there with my sister and I only seen her about four times in that year and we're in the same building in the same mission. They had a fence in the playground. Nobody was allowed near the fence. The boys played on this side, the girls played on the other side. Nobody was allowed to go to that fence there and talk to the girls through the fence or whatever, you can't."

Beverley Anne Machelle remembers even after two of her brothers committed suicide at school, she wasn't allowed to talk to her sister:

"I wasn't even allowed to talk to my brothers, and I had three brothers there. Two of those brothers committed suicide. Yeah, it really hurt not to be able to, and I couldn't even talk to my sister."

Madeleine Dion Stout reflects that the residential schools left a "sense of separation" in survivors:

"There was a sense of separation and the sense of, of not connecting to your own, you know, the people who would mean the most to you, your family members, and your community members, a complete separation."

Many survivors arrived at school speaking indigenous languages, usually with no understanding of English or French, and students were punished if they spoke their own languages. As Marcel Guiboche remembers:

"A sister, a nun started talking to me in English and French, and yelling at me. I did not speak English, and didn't understand what she, what she was asking. She got very upset, and started hitting me all over my body, hands, legs and back. I began to cry, yell, and became very scared, and this infuriated her more. She got a black strap and hit me some more."

"I don't understand the religious teachings of the priests and the nuns. There was a big blackboard that says if you're good boy you'll go to heaven. On the other side of the drawing, there's if you commit mortal sins, this is where you’re gonna go, and then you have Lucifer and hell, and it said always, always forever, forever. That's traumatizing for a twelve-year-old, or a fifteen-year-old, or a fourteen year-old. Anyways, when I left the residential school, I knew that if I died, for sure I was going straight to hell because I was disobedient, because there are things lacking in my childhood."

Jeanette Basile Laloche remembers what happened when she rejected a priest's distorted lessons about her own language and culture:

"They gave us a lesson on the Pentecost, and then the principal Father came with the inspector. You had to be good in you person, and you had to have good posture. Then, they explained to us the Pentecost. Then he said: "The Apostles had tongues of fire on the top of the head, then they started speaking all languages." Then there I said: "No, no, they didn't speak my language." Then there, he insisted, he said: "Yes, Jeanette, they spoke your language." I said: "No, it is impossible that they could have spoken my language." Because, I began to be a rebel then: the God that my grandmother taught me about, my grandparents taught me, he was nothing like theirs. Then there, I said: "No, they didn't speak my language." I shouldn't have, we didn't have a word to say, and I remember what he said: "Put your hand on the desk." You couldn’t contradict them, I placed my hand on the desk, and with the ruler, I had to repeat, repeat that the apostles spoke my language. Me, it took time before I said it, but you know that's it, I was marked: I was hit with the ruler, with … there was a blade on the end of the ruler." 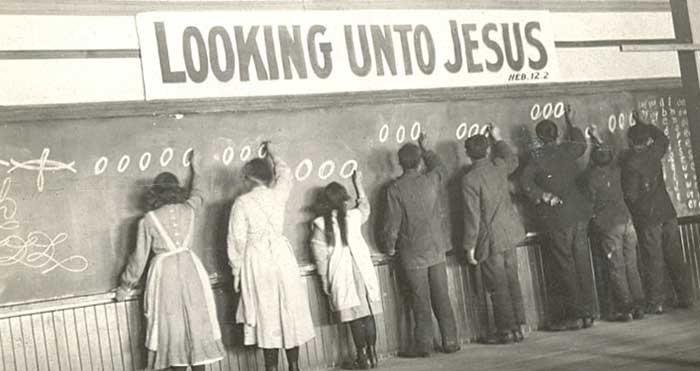 As Hazel Ewanchuk remembers, violence was used daily to enforce "the orders":

"You know we were ordered around like, we were already big girls, you know. We had to take the orders no matter what. You couldn't say, you know, I can't do that, you did it, or else you got a strapping, and we had Bible study every night. I didn't mind that. I thought, what are they preaching here about love? Where is that love? You know. There was no love for us. They made a liar out of Bibles and liars of themselves too."

And as Julianna Alexander remembers, the schools' demands of moral perfection from students were often in jarring contrast to the violence of those running the schools:

"You know they were trying to tell me that's this church, or this place we're in, you know, I had to do, I had to be this perfect, perfect person or whatever. And yet at the same time, that's not what I saw. Because I thought to myself, well, if you're a priest and nun, how come you're doing this to this child, or you're doing this to me, and I would say it out loud, and I'd get more lickings."

Vitaline Elsie Jenner remembers strict, patriarchal attitudes towards gender and sexuality instilled a sense of "shame" in girls growing up in residential schools:

"And you know they never explain anything, like you're developing into a woman, and all that good stuff, you know, which is not nothing shameful about it, it's, it's natural, you know. But to me I, I came out of it, out of there, just being shamed about everything. Everything was a shame, shame-based."

Lacking their culture's traditional knowledge, and offered nothing in the way of sex education, this led to confusion for young girls who survived the residential schools, Muriel Morrisseau remembers:

"I didn't know what was going on because they never told us. All they did was mark the calendar and give you a piece of rag that was already stained, dirty looking, ugh. We had to use that but I didn’t even know what was happening with me."

Young and alone, many survivors had difficulty coping with their emotions, as Josiah Fiddler remembers:

"My first few weeks in school, I cried every day. Either it was on the beating of the seniors, the beatings, the pulling of the ears by the nuns, and my first introduction to the principal was a slap across the head and told me to get downstairs and join the other 100 boys there. After those first few weeks I finally said, I'm not going to give them that satisfaction any more, I stopped crying. And to this day, I haven't cried. I really can't. And I feel so good for people that have the ability to be able to cry because as I said, I don't know how to cry."

And those emotions, Antonette White remembers, were even used to send messages:

"I remember the one young fellow that hung himself in the gym, and they brought us in there, and showed, showed us, as kids, and they just left him hanging there, and, like, what was that supposed to teach us? You know I’m fifty-five years old, and I still remember that, and that’s one thing out of that school that I remember."

"Meanwhile in Canada," Canadians are forgetting Canada has its own problems with racism