What is Stephen Harper's latest excuse for not doing anything about climate change?

"We've simply got to find a way to create lower-carbon emitting sources of energy," Stephen Harper told reporters Monday. "To achieve these kinds of milestones over the decades to come will require serious technological transformation."

That's Harper's explanation for a new, unbinding commitment from G7 leaders to end the use of fossil fuels by the year 2100 -- a time so distant in the future, Stephen Harper's granddaughter will be a senior citizen.

We could have made a stronger statement on the reduction of greenhouse gases at the G7 meeting in Germany, but it turns out Canada (with the help of Japan) went against world opinion and kiboshed that plan.

So Harper's obviously been really gung ho on the investing in new, clean technologies instead of, oh, say, committing huge sums of money to direct investments and massive subsidies to the oil industry, right?

"The absence of government policies to stimulate take up of these new technologies does not bode well for Canada," concludes the recently published 2015 Canadian Clean Technology Industry Report.

Between 2005 and 2013, Canada’s share of the global market for renewable energy and environmental goods has fallen -- yes, fallen -- by a whopping 41%. 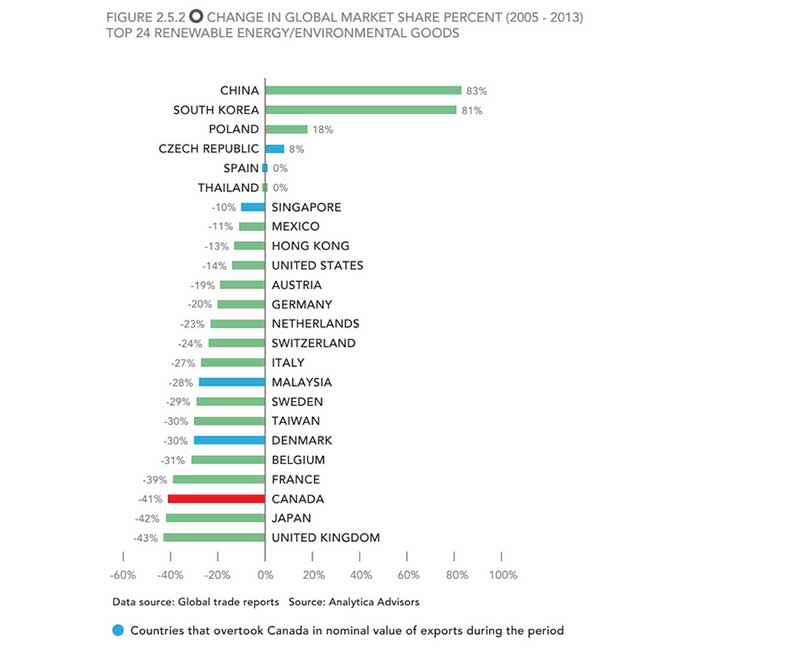 The report adds that Canada's clean tech industry "may struggle to retain even current market share," and a present challenge is securing more R&D investment.