Why does Christy Clark call herself a Liberal when so many people working for her behind the scenes are literally Conservatives?

Are they cut from the same cloth?

But the revolving door between people working behind the scenes in Clark's Premier's office and Stephen Harper's PMO is much deeper and goes back much, much further.

Here are only 24 examples: 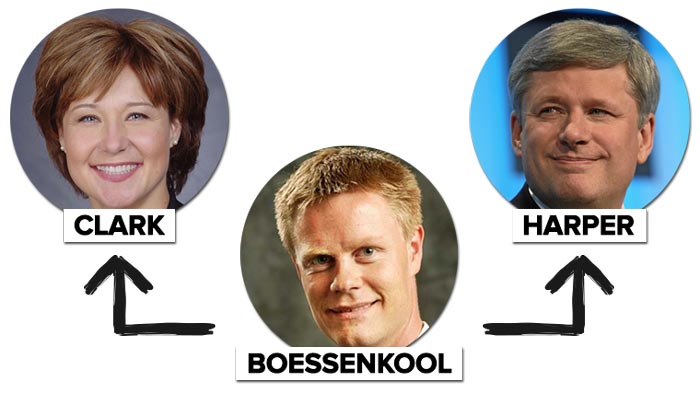 Before becoming Christy Clark's Chief of Staff, Ken Boesenkool was a senior advisor to Stephen Harper in Ottawa. Boesenkool and Harper go way back – he even co-signed Harper's infamous letter to Ralph Klein demanding he "build firewalls around Alberta."

After resigning as Clark's Chief of Staff in 2012, Boesenkool returned to Ottawa to play a key role in Stephen Harper's war room during the 2015 election. 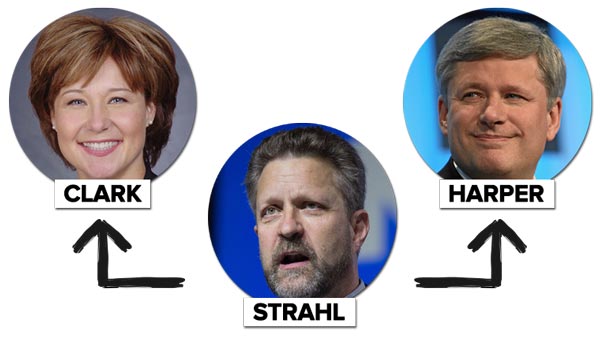 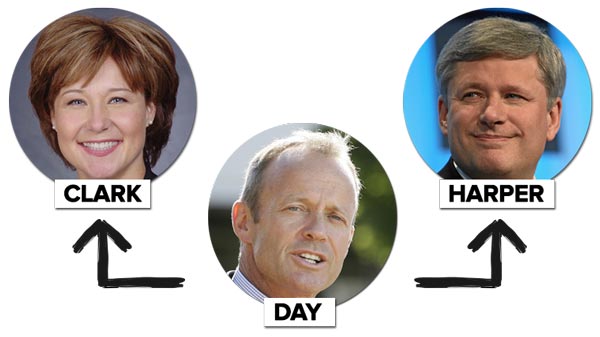 But in 2013, Day endorsed Clark during a speech at the BC Liberal convention – he even made a special cameo appearance in a 30-minute infomercial produced by the BC Liberals. 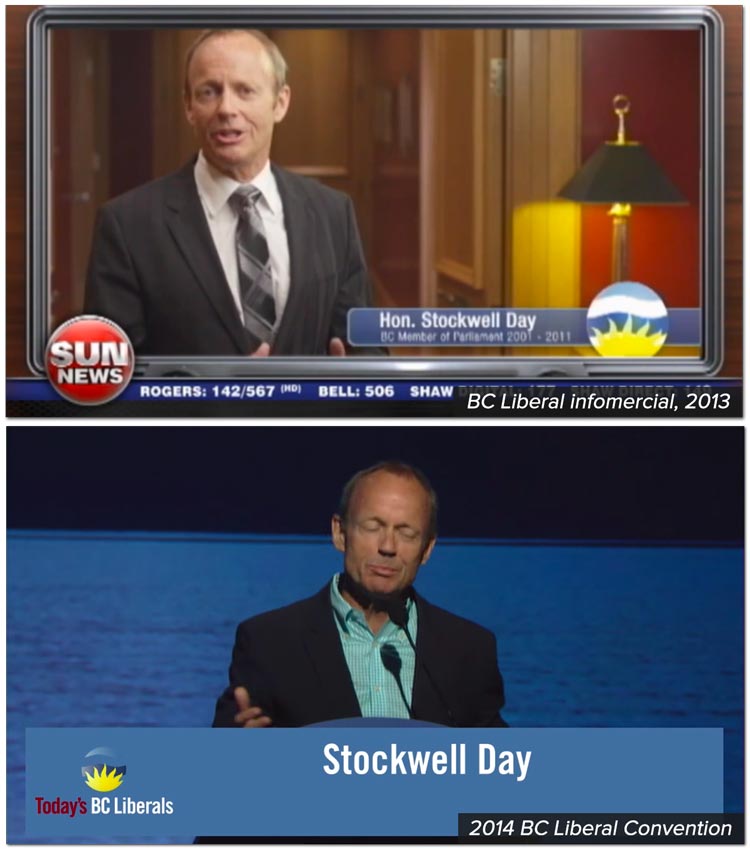 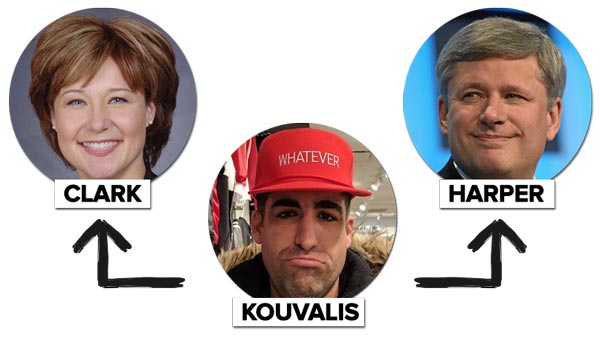 A former pollster for Harper's Conservatives (he was also the architect of Rob Ford's campaign to become Toronto mayor and, until recently, he was officially the manager of Kellie Leitch's Conservative leadership campaign) Kouvalis also ran focus groups and came up with messages for Clark's BC Liberals in 2013.

Kouvalis was lined up to work for Clark again in 2017, but after a temper tantrum on Twitter, he supposedly stepped away from the campaign. 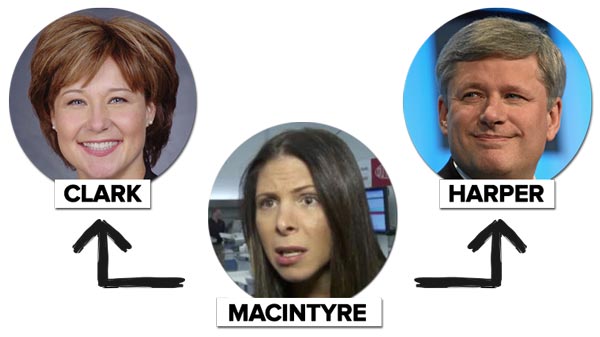 Before becoming Clark's Director of Communications, MacIntyre served as Harper's media spokesperson – her gig in BC didn't seem to go so well, though: 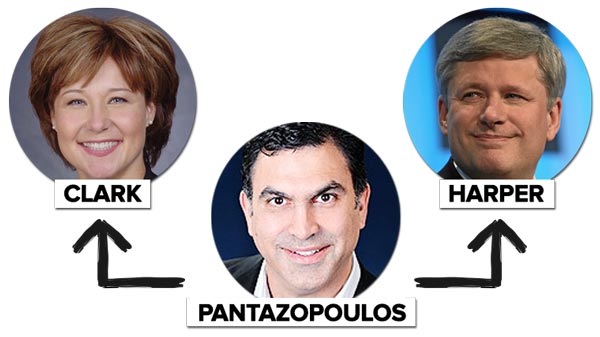 Since the early days of the Reform Party, Pantazopolous has advised everyone from Stockwell Day to Rob Ford to Stephen Harper.

After playing a key role for Clark running voter contact during the BC Liberal's 2013 campaign, Pantazopolous was named Principal Secretary to Premier Clark. 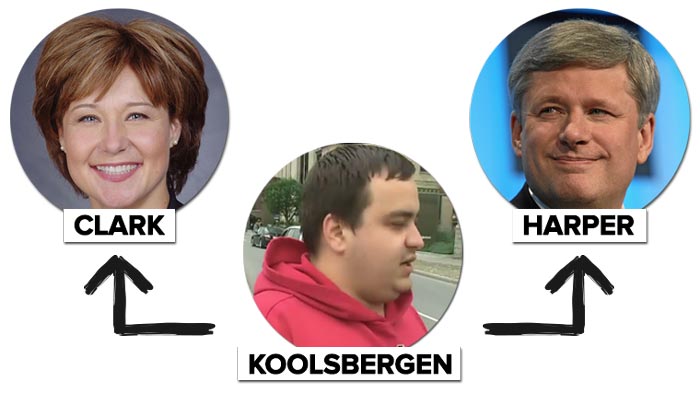 When Stephen Harper wanted to make a problem go away, Nick Koolsbergen was the staffer he turned to.

Koolsbergen was the Director of Issues Management for the PMO, a job that saw him create Harper's "enemies list" and speak with witnesses during breaks in the Mike Duffy trial, all while milling around the Ottawa court house dressed inconspicuously in a St. Louis Cardinals hoodie. Today, Koolsbergen is on the public payroll as Clark's Executive Director of Communications and Research.

Nick Koolsbergen wore a Cardinals hoodie *and* a Cooperstown hoodie to the Duffy trial? Is he really into baseball? pic.twitter.com/JWxhJcvcxB 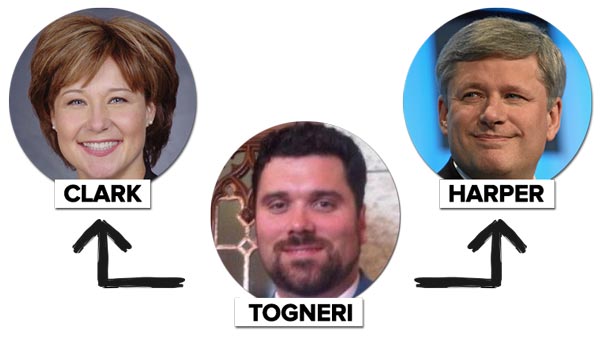 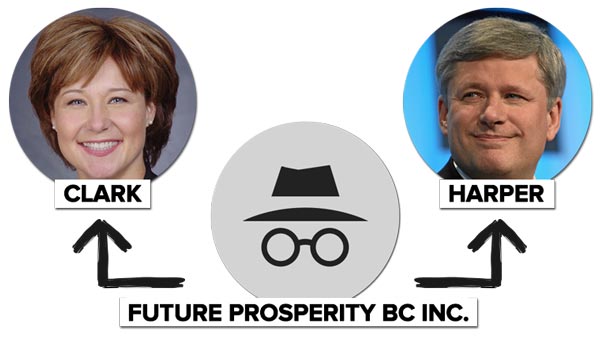 Business interests in the natural resources and hospitality sectors are reportedly bankrolling a firm calling itself "Future Prosperity for BC" that plans to blanket BC with anti-NDP attack ads ahead of the 2017 provincial election.

It turns out one of the people running this group is a former PMO staffer who was also working at Stephen Harper's consulting firm at the same time as he was moonlighting for the shadowy group. 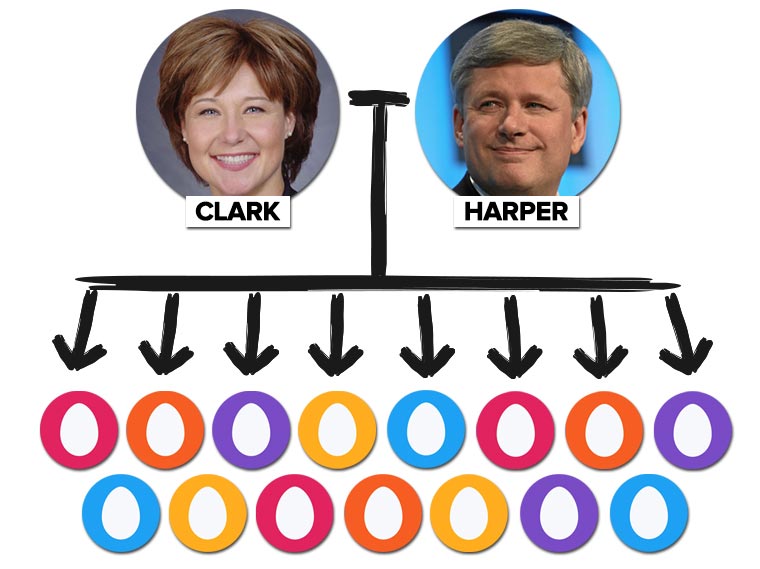 And let's not forget all the staffers who've worked behind the scenes for both Clark and Harper:

Alexander Schiff: Executive Assistant to BC Environment Minister Mary Polak, he was previously the campaign coordinator for Conservative candidate Erin Boshko in 2015.

Kent Verge: Chief of Staff to Minister of Jobs Shirley Bond, he used to be an advisor to a couple of Harper cabinet ministers focused on transport and the environment.

Carter Mann: Operations coordinator in the Clark government, also a former Press Secretary for Revenue and Defence and Executive Assistant to Preston Manning.

Nathan Clarke: Executive Assistant to BC Transport Minister Todd Stone, he was Special Assistant in Harper's Ministry of Aboriginal Affairs a few years ago.

Lorne Mayencourt: Director of Research for the BC government's caucus communications team. Once ran for the Harper Conservatives in 2008.

William Zylmans: Communications Officer for the Government of BC, formerly a Special Assistant to Peter MacKay.

William Anderson: BC Government Director of Communications and Public Engagement, used to be the Executive Assistant to Natural Resources Minister Joe Oliver.

That must be 24 separate coincidences, right?