Canada's having a national debate about how the criminal justice system handles cases of sexual assault.

Henein said she didn't want to talk about her role as a defence lawyer during Ghomeshi's trial (CBC notes the case "is still within the 30­-day appeals period"), but she did say she wanted to publicly "address some of the misconceptions" about the system, "because it's a system I believe in."

Although she had a good suggestion about increasing resources for the Crown, some thought Mansbridge missed the mark, engaging in a basic discussion about how things work instead of honing in on the bigger structural problems in the criminal justice system that surfaced during the trial:

What could Mansbridge have asked instead?

Here are three questions he didn't ask, but could have led to a more meaningful discussion:

1. Is the system "good" at delivering justice for survivors of sexual assault?

During the interview, Henein pushed back against Mansbridge's suggestion that Canada has reached "a critical point" in how we look at the criminal justice system handles sexual assault. She stated "we have a very, very good system."

Maybe he should have asked: "good" for whom?

Reflecting on how the system handles sexual assault cases, retired Supreme Court Justice Claire L’Heureux-Dubé has previously stated "myths, stereotypes and sexist assumptions about women who have been sexually assaulted have too often hindered the search for truth and imposed harsh and unnecessary burdens on complainants in prosecutions of sexual offences."

Dubé adds that "change is crucial in order to ensure that such crimes will be reported, that the system is fair for both accused and complainant" and that the unique circumstances of the crime are "taken into account by our legal responses to sexual assault."

The YWCA points out only 33 out of every 1000 sexual assaults were reported to police in 2014 – and 12 of those 33 reported assaults led to charges.

Out of 1,000 sexual assaults, only three result in convictions.

With a successful conviction rate of 0.3%, can we really call that system "good"?

A Mainstreet/Postmedia poll following the Gomeshi trial suggests the trial eroded confidence in the criminal justice system, with 38% of Toronto residents saying they have less confidence in the system now than before.

And nearly half (46%) of women say their confidence in the system was shaken by the trial. 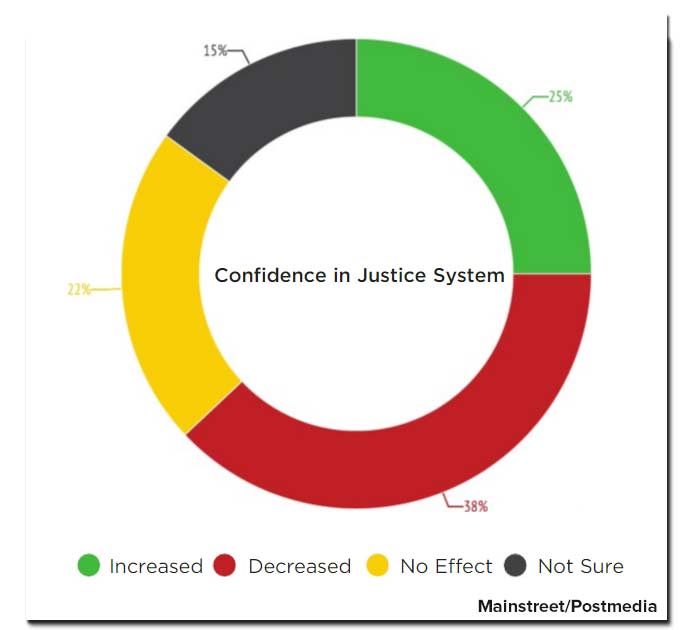 For Henein, the answer is "no":

"There is nothing special about the type of crime."

But a good follow-up question from Mansbridge would have been: why?

Toronto lawyer David Butt says the criminal justice system's adversarial model is "structurally ill-suited" to deal with sexual assault cases, particularly given "complainants who are coming forward to talk about very intimate and distressing violations of their sexual integrity."

Other legal experts suggest creating specialized courts, similar to ones currently address cases affecting young offenders or mental health issues, in which judges and crown counsels "have specialized knowledge about the dynamics of sexual violence and the very many ways in which people who are surviving from this kind of trauma are coping."

Others suggest offering the option of a "restorative approach," a process that allows the complainant and the accused to mediate a solution "in a collaborative manner so that everybody can learn from what happened."

Sexual assault cases often encounter special circumstances relating to how people respond to abusive relationships, how they're socialized to react to abuse and how the brain processes memories and trauma, for example.

"A one-size-fits-all criminal justice model doesn't fit the reality of sexualized violence by the people who are experiencing it," Butt adds.

3. Where should we draw the line?

The Ghomeshi trial brought to attention a defence practice called "whacking the complainant" – tactics that "exploit the stereotypes and vulnerabilities inherent in sexual assault cases to secure a favourable outcome."

But on this issue, Henein seemed to suggest it was a choice between either scrutinizing the character of complainants or sending people to jail without trial:

"If you can't look at the credibility of a person or the reliability of a person or inconsistency or what their explanation are for saying certain things, then what we should probably do is just not have a system at all and you can just say what you wish and we can go straight to conviction."

Is it a choice between one or the other? Are there any limits?

"There's far too much scrutiny of the victim in sexual assault cases," Toronto lawyer Susan Chapman told Macleans. "It's unparalleled."

And Claire L’Heureux-Dubé suggests "the system must recognize that victims of violence against women fear that they will not be believed."

Although the Supreme Court formally outlawed "whacking" in 1999, there are "many loopholes" to get around this restriction, legal experts say.

Macleans senior writer Anne Kingston says the Ghomeshi trial shows how lawyers can poke holes in issues that "have nothing to do with the charges at hand." Sexual assault trials often see cross-examinations that focus on "very personal questions that should have been outlawed by rape shield provisions that have come into the criminal code over the last generation," she adds.

Beyond the Ghomeshi case, there continue to be examples of defence lawyers who question complainants "on why she did not resist, call 911 [and] immediately flee" or dredge up a "complainant's entire history of sexual activity with the accused along with videos, texts, and photos."

For example, a young indigenous woman was "cross-examined for days about consent and conspiring to lie in a case that had five eyewitnesses, including four police officers, two of whom had to pull the accused off the complainant."

Law professors Elaine Craig and David Tanovich call for "a larger regulatory role for the trial judge to stop whacking in its tracks," as well as "greater law-society oversight" and "an explicit no-whacking provision" to be added to ethics codes.