Anyone else get the feeling Conservatives are being a little over-protective about their election signs?

Sure, signs go missing or get vandalized every election. But it's illegal and the costs (usually a couple of dollars per sign) come straight out of the pockets of candidates. So don't damage signs, please.

That said, it seems the Conservatives are maybe getting a little bit carried away...

1. Stephen Harper is watching you

Between Bill C-51 and mass digital surveillance, you'd think Stephen Harper would go out of his way to avoid reminding us that he's silently watching all of us.

So of course campaign staff from the Conservative leader's Calgary-Heritage headquarters were spotted slapping black and white "24 hour surveillance" stickers on Harper's election signs in an attempt to scare away vandals and thieves.

More likely it will scare away voters worried about their rights and freedoms instead. 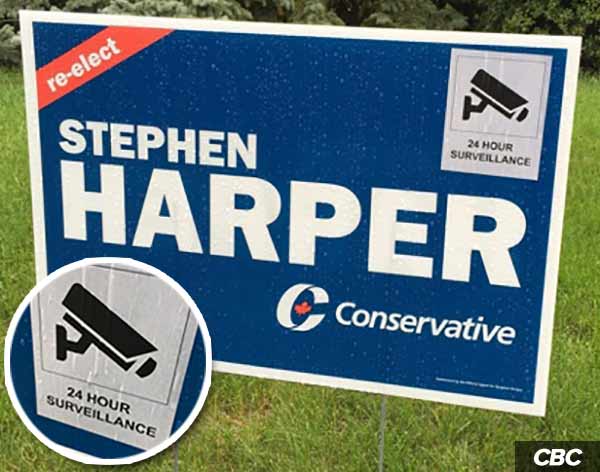 2. Hiding in the bushes

But that's not as weird as Yukon Conservative candidate Ryan Leef dabbling in vigilante justice.

Leef, who is a former Mixed Martial Arts fighter, and his campaign manager hid in the bushes late at night in full camouflage in an attempt to catch a would-be sign vandal.

When a woman who describes herself as "a 110-pound woman" was spotted vandalizing one a sign, she was "forced to the ground" after Leef emerged from the bushes. She says she was left kneeling "handcuffed in the pouring rain with the local Conservative Party member as my arresting officer."

Leef's campaign later began distributing camouflaged hats with the Conservative logo so you can "show your support." And maybe hide in a bush with Leef too:

#cammo hats are in Drop by campaign office get a hat & show your support. #ytpoli #cpc #elxn42 #cdnpoli #teamleef pic.twitter.com/VXOHlhp98p

The RCMP encourages citizens to "leave intervention to the police."

Meanwhile in Owen Sound, someone's been monkeying around with signs belonging to Conservative candidate Larry "stay the hell where you came from" Miller.

Who did it? Was it the Communists? Here's what Miller told a local radio station:

"Every [sign was] on private property. We put very few signs on roadsides, because the Communist Party can put signs on the roadside … Whoever did it obviously isn't a Larry Miller supporter ... But it's just a couple of young punks probably that had too much to drink."

If true, that could lend credibility (it won't) to a completely phoney document Miller circulated a few weeks ago warning that "the breakdown of the old moral virtues, honesty and sobriety," could be a sign of a Communist uprising.

So how does Miller plan to put an end to his disappearing signs?

Hopefully the situation de-escalates before it comes to that.

And police in Saanich, British Columbia expressed concern over Conservative candidate Shari Lukens' use of unmanned aerial vehicles to fly her signs along the sides of highways during rush hour.

Although it could be a creative way of keeping election signs out of the reach of teenagers, police and some drivers were concerned that using drones to carry political advertising could pose a risk to public safety.

“To put it bluntly, flying the drone over a roadway where people are travelling at a high speed is not responsible," said Saanich police spokesman Sgt. Steve Eassie.