Prime Minister Stephen Harper once insisted the Senate is an independent body.

Even during last week's leaders debate, Harper claimed "we only ask senators to stick to their principles" and suggested he has no control over what senators do:

But a new trove of e-mails, tabled as evidence in the ongoing trial of Mike Duffy after Harper's former Chief of Staff Nigel Wright took the stand on Wednesday, seem to suggest Conservative senators are nowhere near as "independent" as Harper implies.

In fact, though Duffy previously alleged senators "conspired to destroy my reputation with Canadians," if the e-mails released Wednesday show anything, it's those same senators conspiring with the Prime Minister's Office to "protect Senator Duffy."

And conveniently, by working in the shadows to protect Duffy, they also protected Harper too.

Here are five examples of Conservative senators showing just how "independent" the so-called chamber of sober second thought truly is:

1. Senator Carloyn Stewart-Olsen: "always ready to do exactly what is asked"

"Hi Nigel," wrote Senator Carloyn Stewart-Olsen in a March 1, 2013 e-mail to Wright. "Just a quick note to say that I am always ready to do exactly what is asked."

Unfortunately, despite the Senator's enthusiastic subservience, no one at the PMO bothered to let Stewart-Olsen "know in advance what the strategy was." Shucks, too bad! She could "only do so much without background." Maybe the Senator "could have stick handled" better too?

Stewart-Olsen was formerly Harper's press secretary and director of strategic communications before Harper appointed her to the Senate in 2009.

2. Senator David Tkachuk "has this worked out"

And according to an e-mail from Wright, "David Tkachuk," chair of the senate's internal economy committee which issued reports into the expenses of Senators Mac Harb, Patrick Brazeau and Mike Duffy, "has this worked out."

Tkachuk had what worked out? Dodgy procedural manoeuvres designed to "protect Senator Duffy." 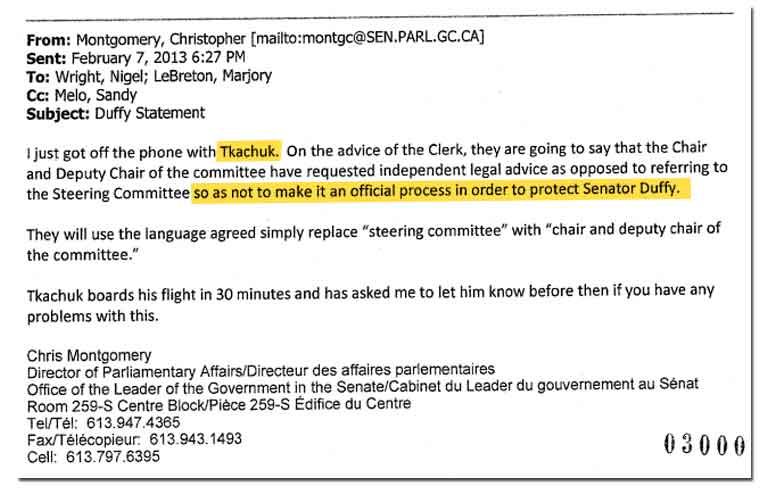 "I think that will get us where we want to go," noted then-Leader of the Government in the Senate Marjory LeBreton who was also CC'd on the e-mail thread.

3. Senator Claude Carignan: "the only one we can go to"

And when the committee's same report into the expenses of Harb, Brazeau and Duffy was released, who in the "independent" Senate could the PMO count on to read their talking points in French?

It turns out Senator Claude Carignan was "the only one we can go to." Sure, "he can't keep to short concise answers reflective of the lines," but at least "he doesn't go off message per se."

Carignan was a failed Conservative candidate who Harper appointed to the Senate in 2009. On August 30, 2013, Harper named Carignan the new Leader of the Government in the Senate, a position he still holds to this day.

4. Senator Irving Gerstein will "help get this done"

Then there's Senator Irving Gerstein, a major fundraiser for the Conservative Party of Canada who was also charged in relation to the Conservatives' 2008 'in-and-out' scandal.

When Wright told Stewart-Olsen he needed help getting the auditor to "understand" that the report "shouldn't conclude that 'Kanata is the primary residence'" of Duffy "because Mike has committed to repay the money" (it would later turn out Wright repaid the money), Wright forwarded that e-mail to Chris Woodcock and Patrick Rogers at the PMO with a note for their eyes only:

"BTW, I will also be asking Irving Gerstein to help get this done."

Twenty days later, Rogers reported that "Gerstein has been trying to arrange the necessary commitments from Deloitte but to date he hasn't been able to receive those assurances."

5. Senator Marjory LeBreton: "fully on board"

Why were so many senators trying to protect Duffy anyway?

One explanation could be that everyone was afraid Duffy would go "squirrelly."

"The purpose of this," Wright wrote on February 7, "is to put Mike in a different bucket and to prevent him from going squirrelly on a bunch of weekend panel shows."

"Marjory is fully on board," Wright added.

At the time, LeBreton was Leader of the Government in the Senate.