Senator Mike Duffy's trial on 31 counts of fraud, breach of trust and bribery is on hiatus until after the election.

Here is a quick recap of the most ridiculous Duffy developments over the course of the past few weeks:

When Stephen Harper's former Chief of Staff Nigel Wright was asked why he was so secretive about giving Mike Duffy $90,000 to repay his expenses, Wright testified he was trying to do a "good deed" and cited the New Testament:

"My view is it was I was helping out, I was doing a good deed and sort of Matthew 6, right... This is, you should do these things quietly and not let your left hand know what the right hand is doing."

Matthew 6:3 suggests that one should be humble when doing acts of charity:

"Be careful not to practice your righteousness in front of others to be seen by them. If you do, you will have no reward from your Father in heaven."

So helping Senator Duffy get out of a pickle on his illegitimate expense claims is now an act of charity? Really?

Apparently the Conservatives' best and brightest in the Prime Minister's Office aren't so good at reading e-mails.

That's the explanation Harper's current Chief of Staff Ray Novak gave for why he wasn't aware of Wright's plan to pay Duffy—Novak says he opened the e-mail, but oh darn, he was pulled away for a call before he could read it.

And according to Chris Woodcock, the PMO's former Director of Issues Management, he was not aware of a plan to pay Duffy $90,000 because he "skimmed" past the-email from Wright that spells this out, stating "for you only, I am personally covering Duffy’s $90k."

Have a secret you want kept safe from govt? There is now a 100% proven method. Just put it in an email addressed to any member of the PMO.

So, two of Harper's top staffers didn't read a crucial e-mail on one of the biggest issues their boss ever needed managed?

Conservative spokesman Kory Teneycke says "it's unfathomable" to think Novak (if, truly, he knew about the cheque) would not tell Harper.

Well, former PMO lawyer Benjamin Perrin testified he was actually sitting in on a conference call with Novak and Wright where they were discussing the cheque:

"Ray was in that meeting and Ray heard this… I remember looking at Ray to see his reaction... So this is black and white, OK?"

4. Harper only holds superiors accountable... Other than himself

The Prime Minister of Canada in charge of Canada, right?

No? Well, the Prime Minister charge of his office, at least? Right?

A week later, after it the court was told Novak knew about the cheque, Harper said his subordinate Nigel Wright and Senator Mike Duffy (whom Harper appointed) are responsible, so he is not “going to go around holding everybody else accountable for their actions.”

5. Irving Gerstein has a “special request”

You'd think the Conservatives would ask Irving Gerstein to lay low for a while.

On Tuesday, an e-mail (complete with a shiny gold Conservative Party logo!) under Conservative Senator Irving Gerstein's name asking "supporters and donors" to pony up $75.

Just a reminder: Senator Gerstein offered to cover Duffy's expenses out of the Conservative Party fund -- flush with millions from Conservative donors and subsidized by taxpayers.

And as e-mails tabled in court show, Harper's PMO staffers coordinated with Gerstein to meddle with a Deloitte audit to allegedly assure the auditors would "report publicly that IF Kanata were the primary residence then the amount owing would be the $90 thousand figure and that since Sen. Duffy has committed to repay this amount then Deloitte's work in determining primary residence is no longer needed." 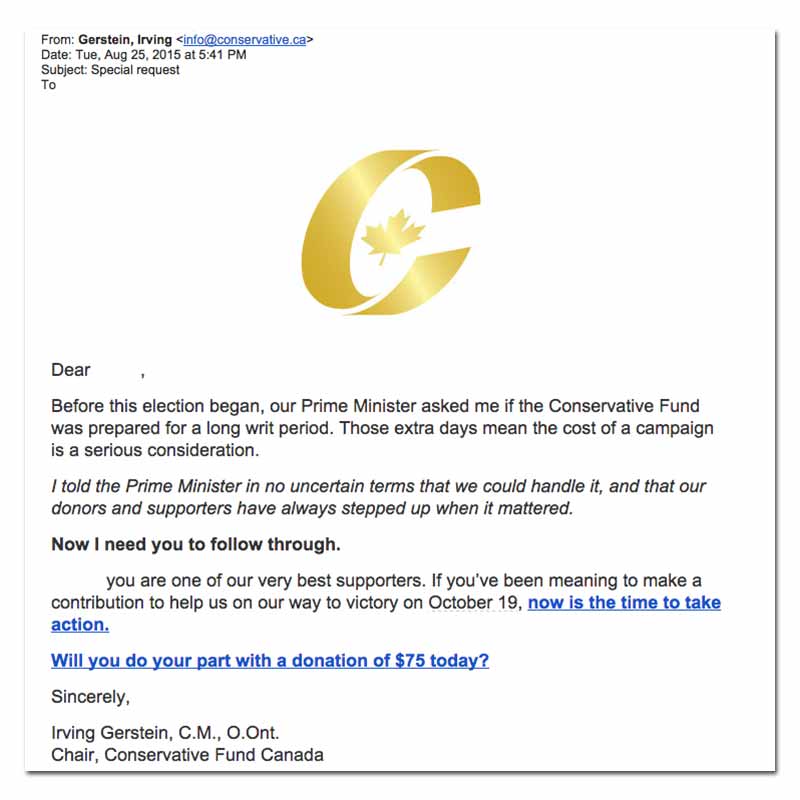