The federal budget is just around the corner and Finance Minister Bill Morneau is projecting an $18 billion deficit.

While there's been speculation Morneau might be deliberately setting expectations low so he can exceed expectations later, it is clear that Canada is going to have to find some new cash over the next few years.

As usual, conservatives will call for more spending cuts – except after the Harper decade, Canada is already spending at historic lows not seen since before the Second World War, so there isn't much room for more cuts: 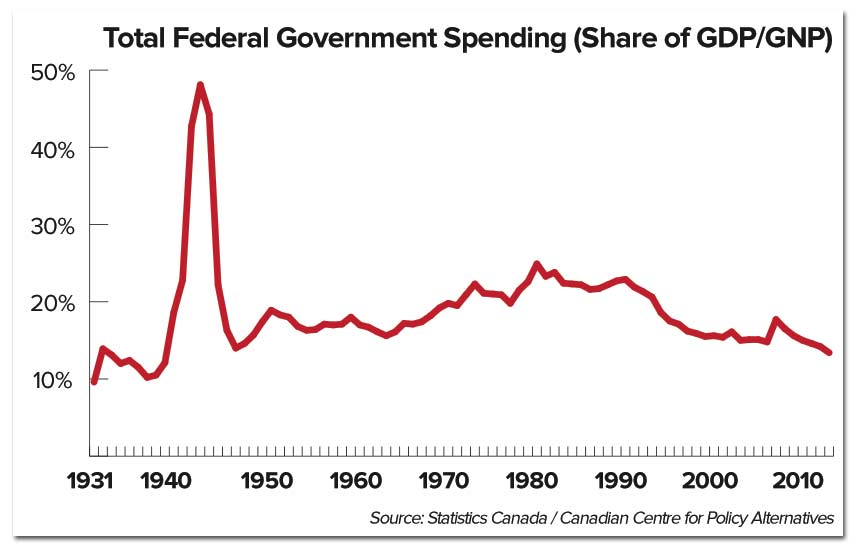 As the Canadian Centre for Policy Alternatives states in its annual Alternative Federal Budget, Canada doesn't have a spending problem, it has a revenue problem:

"The federal government is the smallest it's been since before the Second World War. Federal total spending as a share of the economy stands at 13% of GDP, its lowest point in the past 60 years. The last time the government was this small we had no national health care plan, no pension plan, no guaranteed income supplement, no employment insurance. Federal revenues have been diminished by cuts to the corporate tax rate, regressive income tax policies, and tax evasion on an ever-widening scale."

How can Canada get things going on the revenue side?

Canada's corporate tax rate has been slashed again and again under Liberal and Conservative governments since the late 1980s: 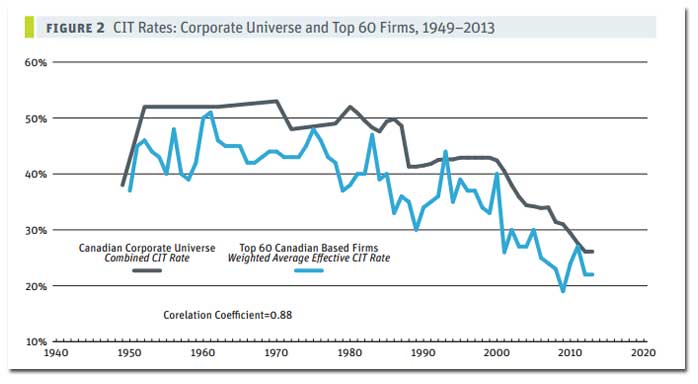 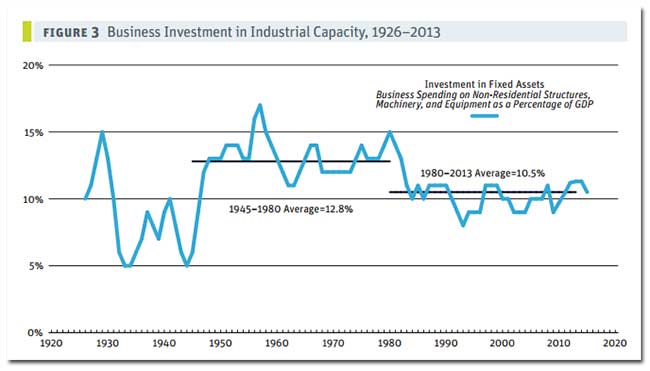 Meanwhile, rather than creating jobs or reinvesting in the economy, Canadian corporations are hoarding more and more of their profits: 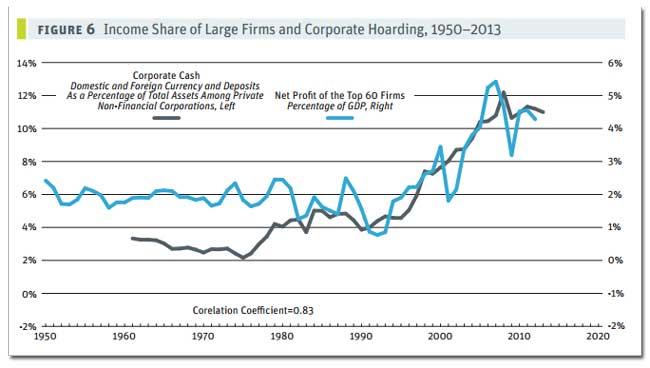 Previous Liberal leaders toyed with reversing Harper's corporate tax cuts, but Prime Minister Justin Trudeau has been dodgy on the issue, only saying "where we are now is a very good place" and leaving the door open to further corporate tax cuts in the future.

He may want to rethink that. The CCPA says gradually restoring the corporate tax rate to 21% (still slightly below its 2006 level) would restore tens of billions in revenues at a time when the federal government is could use the extra cash.

Stephen Harper's former speech writer calls income splitting "socialism for the wealthy," while others call it a tax giveaway to wealthy families with a stay-at-home spouse.

Trudeau's Liberals have pledged to cancel the "unfair" tax break for the wealthy – the CCPA estimates cancelling income-splitting would restore $2 billion each year.

Trudeau's Liberals also promised to close the stock option loophole – though they're now being cagey about it.

Canada's highest paid CEOs were granted an average of $1.9 million in stock options in 2014, allowing them to "deduct 50 per cent of the income derived from exercising stock options,"and the Liberal Party's own fiscal plan and costing document justified closing the loophole by pointing out "8,000 very high-income Canadians" were shaving over half-a-billion dollars off their personal tax bills each year, an average of $400,000 per "very high-income" Canadian.

If the Liberals decide to keep their promise, the CCPA estimates the government can recover $2 billion in revenue over the next few years.

What is known, however, is the loophole described by Trudeau costs Canada about $500 million in lost revenue each year.

"Unlike the United States and most European countries, Canada has no wealth or inheritance taxes except for property taxes," the CCPA explains, pointing out "this has led to growing inequality and economic stagnation because capital is much more concentrated."

The CCPA says that a 45% tax on estates valued over $5 million would generate $2 billion in revenue each year.