Even though it's the largest export industry in Canada, the auto sector hasn't done so well under Harper's Conservatives.

But now with a secretly negotiated new trade deal that we won't see until after the election, things are ready to go from bad to worse.

The Trans-Pacific Partnership is being panned by Canada's auto sector union, parts manufacturers and academics. Harper himself appears willing to concede it won't be good for Canada's manufacturing communities, announcing $764 million for research (spread across 10 years) to soften the TPP's blow on the auto sector, but that's been called a "drop in the bucket" that won't attract any new investment.

Here are a few reasons those who work in the auto sector (or rely on auto sector spin-offs) ain't exactly thrilled with the Conservatives these days:

1. Signing a deal that could kill 1 in 4 Canadian auto jobs

Nearly forty thousand auto sector jobs have already been eliminated during Stephen Harper's time as Prime Minister – that could grow to 60,000 thanks to Harper's trade deal.

The Trans-Pacific Partnership will effectively rewrite key protections for the auto sector that were originally included in NAFTA twenty years ago to protect Canadian jobs.

Under NAFTA in 1994, vehicles without tariffs needed to be built with at least 60% North American parts. Under TPP, that's been reduced to 45%, meaning 55% of a car sold tariff-free could be built using parts made in Mexico or Japan. 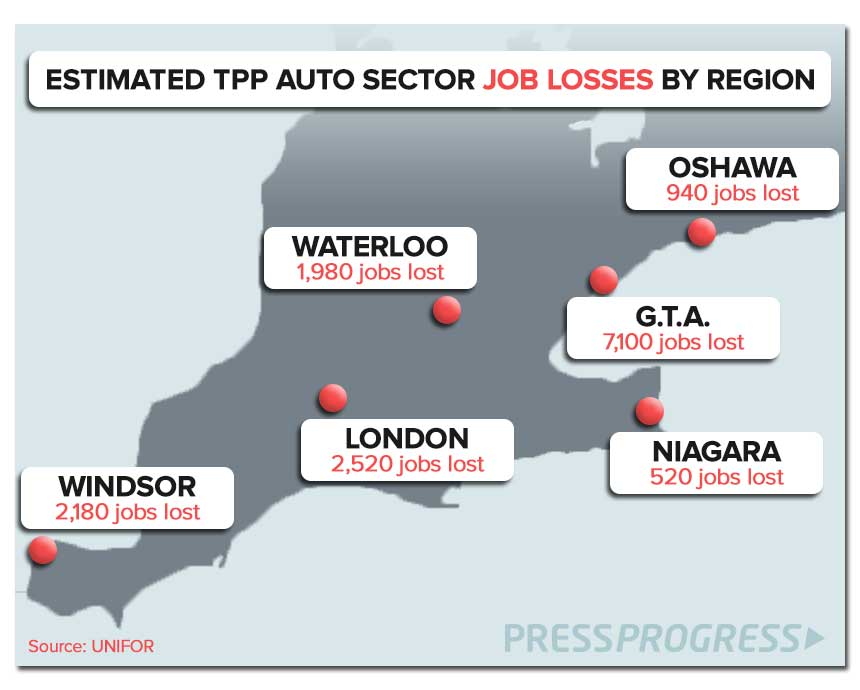 In the 1990s, Canada was the fourth largest assembler of cars in the world.

On Stephen Harper's watch, more foreign-made car parts are coming into Canada than made-in-Canada car parts are being exported to the rest of the world. A $5 billion trade surplus in 2005 has become a $19 billion deficit in 2014.

As it stands now, over half of Canada's trade deficit is with Mexico alone. The TPP will likely cause Canada's overall deficit to grow. 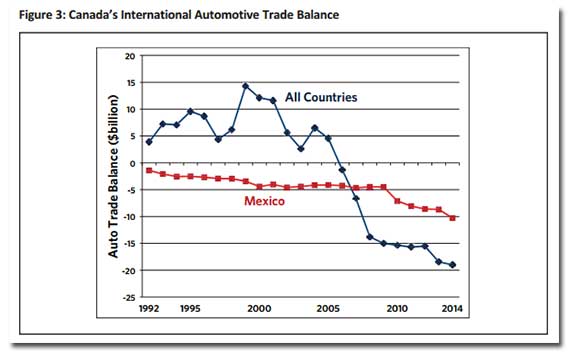 How big of a lemon did Harper get in return for the new TPP deal?

Under the TPP, Canada will eliminate its 6.1% tariff on Japanese cars in just five years.

By comparison, the American tariff on Japanese cars will be incrementally lowered over 15 years after the agreement is signed and won't be entirely eliminated for 25 years. Tariffs on pickups and light trucks

The Canadian Vehicle Manufacturers’ Association says they are "concerned" the 5 versus 25 years phase-out puts Canadian jobs at a significant disadvantage.

The Ontario Government warns Harper's concessions in the new TPP deal will expose its auto sector to "stiffer global competition ... potentially placing the jobs and livelihoods of many Ontarians at risk."

In an effort to pay for election giveaways, the Conservatives sold its shares in General Motors early (acquired after the 2009 bailout) at a loss of $3.5 billion for Canadian taxpayers.

At the time, the move was criticized for weakening the government's case for keeping the automaker's Oshawa plant open for business.

Less than a month later, 1,000 jobs were eliminated when GM moved production of the Chevrolet Camaro out of Canada.

Only one week before GM announced the loss of 1,000 jobs in Oshawa, Export Development Canada announced a $530 million loan to Volkswagen to help them "grow their operations in North America," despite the company bringing in nearly $300 billion revenues the year before.

Where are Canadian taxpayers creating jobs?

4,000 kilometres away in Mexico and Tennessee. The only string attached was that Volkswagen needed to discuss business opportunities with Canadian suppliers. But there's no guarantee Canadian businesses will see a single job created as a result of the deal.

As Unifor's Stanford said at the time:

Even if a Canadian supplier wins a Volkswagen contract, it’s unlikely the work would occur in Canada. Canadian parts suppliers have opened dozens of factories in Mexico and the Deep South – often required to locate near assembly plants. But EDC doesn’t mind: Helping Canadian-owned firms open plants in Mexico is part of its strategy.

Mexico’s auto industry, powered by cheap labour, a growing supply base and lucrative subsidies, is scooping up virtually all new greenfield auto investment in North America. Eight new assembly plants have been built or announced there since 2009. The “giant sucking sound” predicted by Ross Perot in the debate over NAFTA has become a reality. That’s bad enough. But watching a Canadian government agency assist that southward migration is incredible."

Do you think the TPP make it easier or harder to export Canadian jobs to Mexico or American right-to-work states?

So much for Harper protecting Canadian jobs.

Note: This post was updated to include newly revised estimates.