Could this be one of the signs of the apocalypse?

I would like to thank #PMSH and the Canadian people for the opportunity to serve. It is an honour.

What special talents does Poilievre bring to the job? Can he be trusted with a job that sees him oversee one-third of all Canadian government spending?

1. Experience as a small business owner

Poilievre may seem a strange choice as Employment Minister, spending much of his adult life working as a Conservative MP. But did you know Poilievre was once a small business owner?

2. An understanding of the value of hard work

On the same day the Government of Canada issued a formal apology for residential schools, Poilievre had the following to say about compensating survivors:

"Now along with this apology comes another $4 billion in compensation for those who partook in the residential schools over those years. Now, you know, some of us are starting to ask, 'Are we really getting value for all of this money, and is more money really going to solve the problem? My view is that we need to engender the values of hard work and independence and self reliance. That’s the solution in the long run – more money will not solve it."

Poilievre later issued an apology for his "hurtful" remarks.

3. Knowledgeable about the issues

What does Canada's new minister for social development think the best social program is? And what's the best anti-poverty program? The answer is a "strong family" and "a good job":

However, the website of Poilievre's new ministry offers a treasure trove of information and data about the real causes of poverty. They include issues relating to age, gender, race, disability, mental illness and substance abuse problems, availability of affordable housing or location, to name only a few. He should google it some time.

But it's not clear Poilievre's suggested changes to labour laws would even be constitutional. And as Osgoode Hall labour law professor David Doorey pointed out:

"If Poilievre doesn't even know this most basic fact about labour law, then you have to wonder why this guy is dabbling in labour law amendments at all."

5. An incorrect belief that Stephen Harper has the best job creation record in the world:

"There are one million net new jobs in Canada since the depths of the recession. That is the best job creation record of any of the G7 countries."

Of course, that's not actually true.

As economist Mike Moffat points out, the United States is actually doing far better in terms of sheer number of jobs created. And when you compare employment growth as a percentage, the U.S is seeing job growth increasing while Canada's job growth is in steady decline: 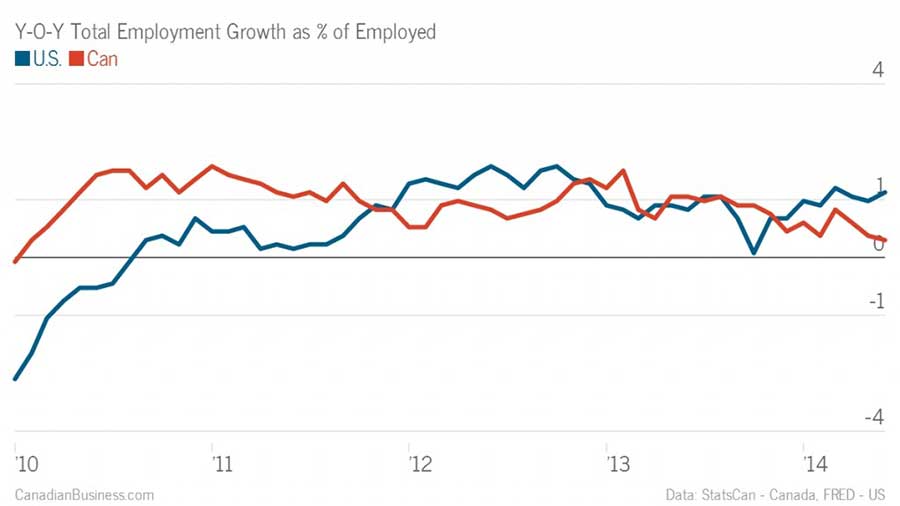 In 2013, Poilievre solved a complicated question sociologists had been grappling with for decades: What is the cause of terrorism?

"The root cause of terrorism," Poilievre explained, "is terrorists."

So what can we expect from Poilievre at the ministry of jobs? Will we learn that jobs are created by job creators? And is unemployment caused by the unemployed?