7 maps show Alberta isn't really that conservative after all

Anyone get the feeling conservatives are in denial?

Since election night in Alberta, conservative pundits and think tanks have been scrambling to dismiss the notion that the election of an NDP majority government is a sign of even the slightest of shifts in the province's values.

On Tuesday, former Alberta PC Finance Minister and Manning Centre fellow Ted Morton stated that the "election does not mean that Alberta has experienced a Jekyll-and-Hyde transformation from right-wing conservatism."

That follows another article in an online journal sponsored by the charitable Manning Foundation rejecting "the idea that Alberta's century-old conservative political culture has finally succumbed to the onslaught of left-liberal immigrants from across the country and around the world" while dreaming that "conservative hegemony" will one day rise again.

The article, distributed via email by the Manning Centre, goes on to explain how the "PC brand is finished, on its way to the ash heap of Alberta history to be buried alongside the United Farmers and Social Credit. Wildrose is born again (not that they would ever use that metaphor!) as the Official Opposition, under a leader who started out inauspiciously but grew impressively in the crucible of the campaign."

Yet data from 65,591 respondents collected by Vote Compass -- an online app developed by Vox Pop Labs, the University of Calgary and CBC News -- suggests that on a wide swath of issues, Albertans aren't quite as conservative as some would like to imagine they are.

Some financial analysts reacted to a modest 2% increase in Alberta's corporate tax rate by firing off e-mails to the Business News Network fearing the "APOCALYPSE." Reality TV star Kevin O'Leary went futher, saying he's worried Premier-designate Rachel Notley is planning on "throwing all the entrepreneurs out of the province."

Well, it turns out most Albertans think asking corporations to pay their fair share is common sense. 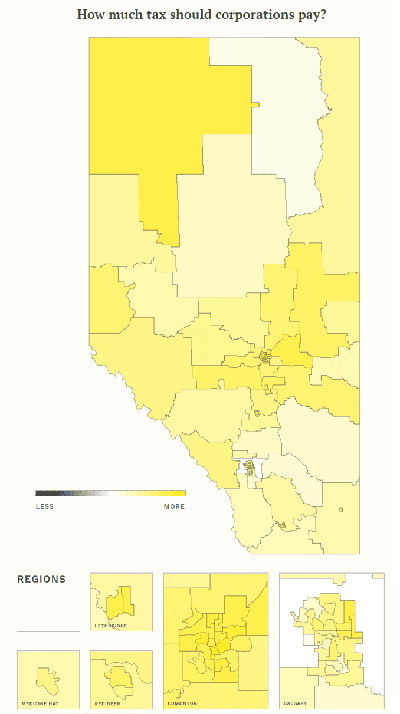 Here's another shocker: Albertans want millionaires to do a better job pitching in for the common good.

As it stands, Alberta's super rich enjoy the lowest taxes in North America. One reason for that is Alberta's flat tax, which taxes everyone at the same rate regardless of income. This is promoted as making taxes simpler, but in reality it leaves middle earners shouldering more of the burden and leaves high-income earners are let off the hook. Even former PC leader Jim Prentice said he was going to abolish the flat tax and bring in progressive tax system in 2015 budget plan. 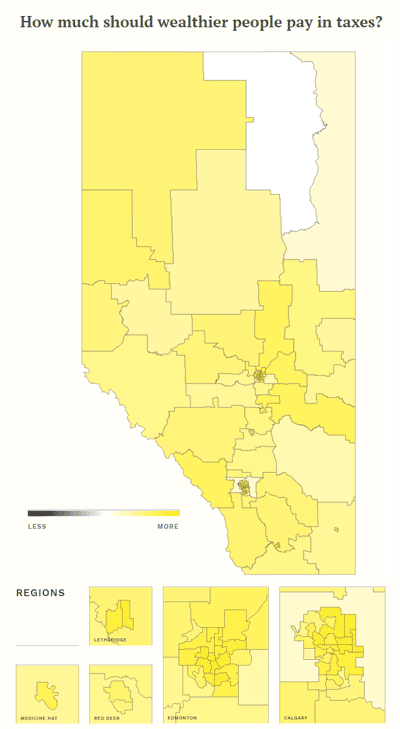 3. Oil and gas companies should contribute more in royalties

Norway has a trillion dollar sovereign wealth fund. Alberta's heritage fund? It's stalled at about $17 billion.

Another reason? If the royalty formula hadn't been changed in 2009, this money Alberta lost could have covered up to 40% of Alberta's projected deficit had it been put away for a rainy day. 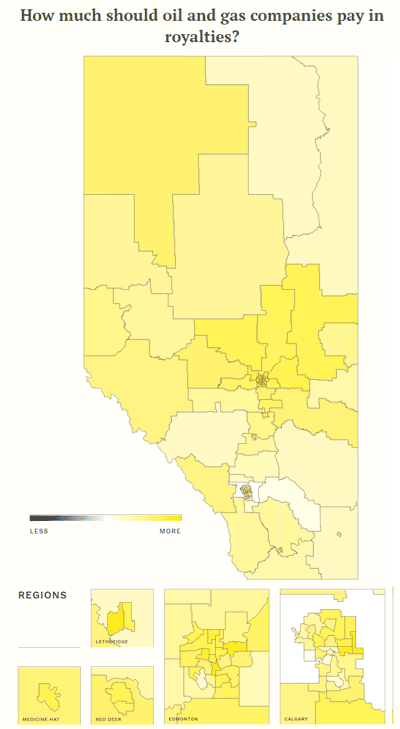 4. Alberta is too dependent on oil

According to data released by Vote Compass earlier in April, 86% of Albertans -- including 79% of PC supporters and 78% of Wildrose supporters -- agreed that "Alberta's economy is too dependent on oil and gas." 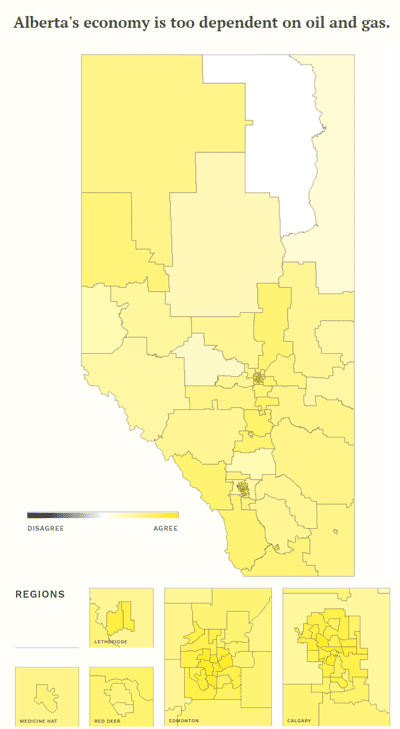 5. Alberta should be doing more to reduce greenhouse gas emissions

Although Stephen Harper thinks the idea of regulating the oil and gas industry is "crazy" talk, it turns out he's at odds with constituents from his own province: 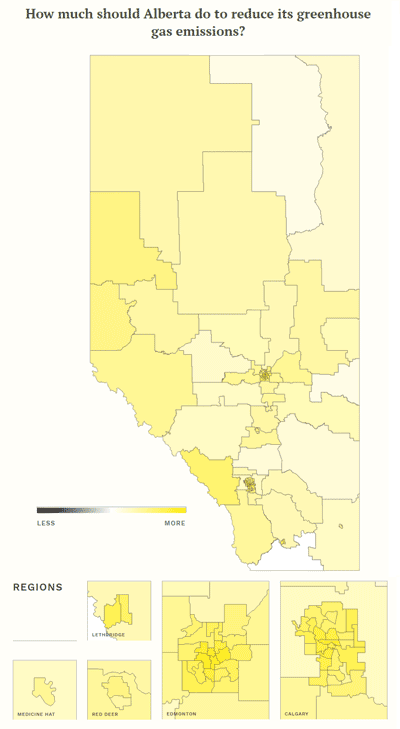 6. Public services are more important than balancing the budget

Prentice triggered a backlash against himself in March when he urged Albertans to "look in the mirror," suggesting Albertans had taken "the best public services in the country" for granted and needed to accept that they can't keep funding frivolous luxuries like schools and hospitals anymore.

It turns out Prentice completely lost Alberta on that one: 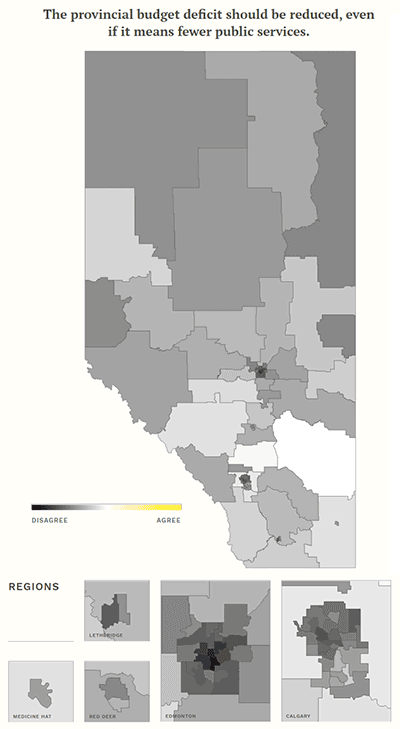 Since 1992, Alberta's tuition fees have increased 267% (far above the national average of 179% -- the second highest increase in the country).

So do Albertans want to increase tuition fees (already 30% of total operational revenues at Alberta's post-secondary institutions) and make students shoulder more of the burden? Nope: 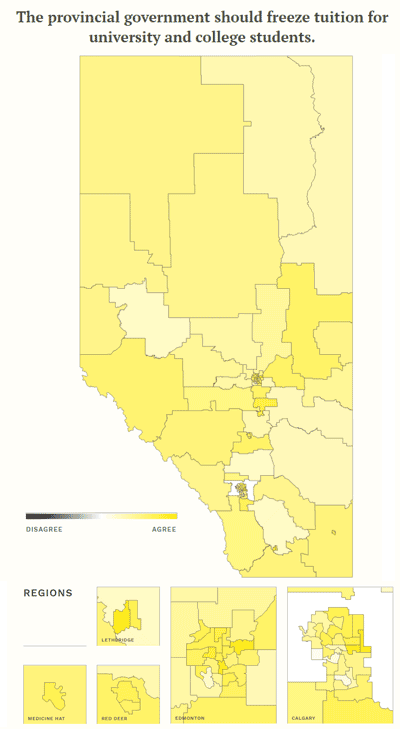