Child care is back in the news with two competition visions: give parents a monthly cheque of $100 to help cover monthly child care bills that can top $1,000 or build a real national $15-a-day child care program.

So for those of you who need a good, hard dollars and cents explanation about why a real child care program is worthwhile, here are seven perfectly sensible reasons why the investment is good for the economy.

1. Child care pays for itself

One study, published by University of Quebec at Montreal economist Pierre Fortin, for every dollar Quebec spends on child care, $1.75 is returned to the economy.

So how does that work?

Well, Fortin points out that child care stimulates "increased economic activity" by removing barriers preventing some people (*cough* mothers) from entering the workforce, leading to a "ripple effect." This includes an increase in purchasing power and tax revenues, which in Quebec returned an additional $5.2 billion into the provincial economy and $700 million in additional tax revenues.

Child care needs child care workers, right? How much does that cost?

According to one estimate, every one billion dollars invested in child care creates an estimated 30,000 jobs.

To put that into context, Finance Canada estimates that every one billion dollars in corporate tax cuts creates only 3,310 jobs. Going by the numbers, that would make child care 806.3% more effective at creating jobs than giving corporations tax breaks.

But let's not pretend that the absence of child care doesn't come with costs.

The University of British Columbia's Paul Kershaw has estimated the total cost of "work-life conflict among employees with preschool age children" at $4 billion per year as a result of "absenteeism, employee turnover and healthcare premiums."

(That breaks down to $1.74 billion in Ontario, $600 million in British Columbia and $497 million in Alberta, to offer some context at the provincial level.)

"When someone is absent, colleagues have to fill in, and supervisors take time from what they would have otherwise done in order to manage the unexpected HR gap," Kershaw points out. "The company foregoes the profits it expected to earn on whatever labour doesn't get performed."

Child care costs vary between age groups and between provinces, but the average costs of day care is high enough to represent a significant chunk of some parent's incomes.

Rethink Childcare crunched the numbers and here's what that looks like: 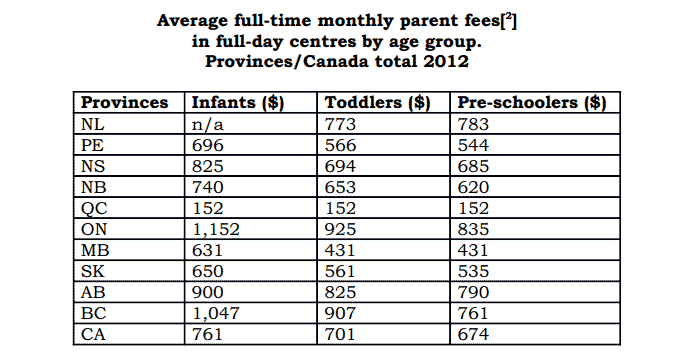 Under Quebec's $7-a-day child care model, parents of infants pay an average of $12,000 less per year per child (for parents of toddlers, it comes out to $9,276 less per year). For many lower-income parents, those are savings close to the equivalent of a full year's rent.

According to the Canadian Council on Learning, while many influences, including parents, play a role in childhood development, access to high-quality child care with "well-structured, well-planned curricula" is linked to "better cognitive development, communication and social skills" among young children. This can help produce better academic outcomes down the road.

A report commissioned by the Business Council of British Columbia in 2009 estimated that children failing to meet developmental benchmarks could cost BC's economy $401.5 billion over the next 60 years.

"Early child development is a critical issue for business leaders, because the years before age six set in motion factors that will determined the quality of the future labour force," the report stated.

6. Child care encourages greater participation of women in the workforce

"Child care is the ramp that provides equal access to the workforce for mothers," Supreme Court of Canada Justice Rosalie Abella said in the 1984 the Royal Commission on Equality in Employment.

And the data backs that up. Pierre Fortin found that employment among women increased by nearly 10% in the years following Quebec's introduction of its child care program in 1997.

While these are positive ends in and of themselves, as Fortin points out, removing these barriers and making child care more affordable also restores purchasing power to women. This gives them greater choice over how to raise their families as well as leads to more money being reinvested in the economy.

And not only would child care help women who want to be in the workforce join the work force, it would also help topple some barriers that contribute to the gender wage gap. 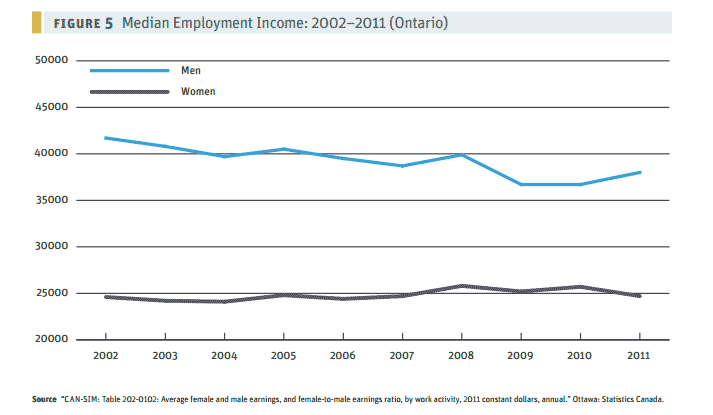 According to Kate McInturff of the Canadian Centre for Policy Alternatives, "women are nine times more likely to cite child care as a reason for staying in part-time work rather than taking full-time work."

While the wage gap is held open by numerous barriers, one reason is that high child care costs force many women to make choices between family and career.

"Women's opportunities for higher pay are limited by the family responsibilities which they still disproportionately bear," says Mary Cornish, Chair of the Ontario Equal Pay coalition, adding that "women with children earn an additional 12% less than women without children."