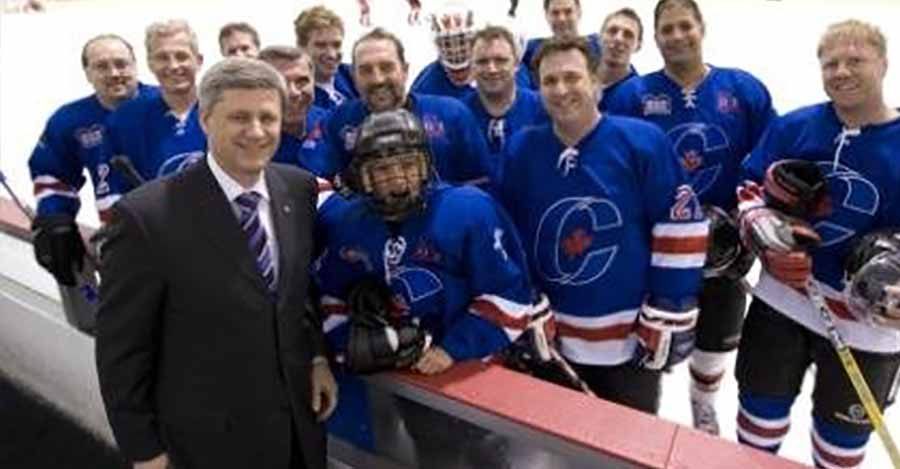 Is it time to axe the coach?

Team Canada isn't winning like it used to. On every stat across the board, Canada is down -- the Bank of Canada just pegged economic growth at zero per cent and said the labour market hasn't improved in three years, full-time jobs are disappearing fast and the quality of the jobs that remain are at a 25-year record low.

Though Prime Minister Stephen Harper reminds us he's a student both of economics and  the 'great game' of hockey, his performance on the economy has been absolutely disappointing. Plus his own staff admit that for all his talk, he may not even know how to skate.

The Maple Leafs just cleaned house, so is the same solution needed in the House of Commons? It's looking like Team Canada needs to cut its losses and start planning for a rebuild.

1. Deking out Canadians on the economy with $7.5 million in taxpayer-funded ads

As this year's hockey playoffs kick off, the Conservatives will spend an unprecedented $7.5 million on a taxpayer-funded ad blitz promoting the Conservatives' economic policies in advance of this month's federal budget -- just in time for the Stanley Cup playoffs.

2. Joe Oliver's spin-o-rama on the economy

Here's a quick rundown of some of Oliver's fibs:

3. Trading in General Motors stocks for a couple of pylons and a bag of pucks

In a desperate move to balance the budget and avoid embarassment, the Conservatives traded their remaining stock in General Motors last week, a premature move that amounted to a $3.5 billion loss for Canadian taxpayers (the government bought in to stabilize GM during the 2009 recession and prevent mass job losses).

And adding insult to injury, today we learned Canadian manufacturing sales have declined again -- the fourth time in five months. Sales of motor vehicles alone declined 14.9% in February. That can't be a good omen for what's ahead.

4. Peter MacKay can't shoot a law out of a paper bag

Did you know Justice Minister Peter MacKay (Dalhousie Law, '91) has a law degree?

It's understandable if you didn't given how often the Supreme Court strikes down his laws as unconstitutional. You'd think he'd be better at writing laws? How much money is the government wasting defending their own badly written laws in court, anyway? This could all be easily avoided if MacKay spent five minutes listening to experts.

And while some may say MacKay should be benched for this, it seems the only ones getting benched these days are his friends, donors and wedding guests.

5. The Conservatives are boxing in health care with a neutral zone trap

How are the Conservatives like the 1990s New Jersey Devils?

Well, aside from boring everyone to death, the Conservatives use a very similar defensive strategy of obstructing health care by underfunding it -- effectively boxing medicare in even as Canada's aging baby boomers create new demands on the system.

In 2014, the Conservatives allowed a 10-year accord with provinces to expire, with no new funding to address the challenges of our aging population. Former Saskatchewan premier and head of the federal health care commission, Roy Romanow, recently warned the nation is headed for an "apocalyptic battle" over the fate of Canada's universal health care system, and pointed blame squarely at the Conservatives for being "missing in action":

"Ottawa's involvement has evaporated. The Minister of Health is missing in action. And medicare is threatened like it never has been before. It is as though the provinces and Ottawa live within two different universes."

It's bad enough wealthy Canadian hockey fans can write-off their playoff seats in a luxury box as a business entertainment expense -- these kinds of leisure activities alone amount for $400 million in tax breaks annually.

But tax credits for corporate boxes at sporting events aren't the only way the Conservatives are helping wealthy Canadians save up for that new yacht:

Even the NHL itself says climate change threatens the future of hockey.

So what are Conservatives doing? For nine years, the Conservatives said they wouldn't act on climate change until the United States brought in regulations. Then, after the U.S. and China signed a historic climate agreement last year, what did the Conservatives do? They blamed Mexico and claimed they needed a "continental response."

Well, Mexico already has a carbon tax. And the U.S. and Mexico signed a climate co-operation deal two weeks ago. So the Conservatives are finally going to act, right? Nope. They passed.