Looking back at Canada's electoral history under the First-Past-the-Post (FPTP) voting system, it makes you wonder if that's the best possible system for a modern, multi-party democracy?

In only three elections has a party formed government with more than 50% support from voters, even though the party that wins a majority of the seats in the House of Commons wins 100% of the power.

And with party support being distributed differently across the country, votes in some locations carry less weight than others. As Andrew Coyne notes in a recent column, here's how many people it took to elect MPs from each party during the last election: 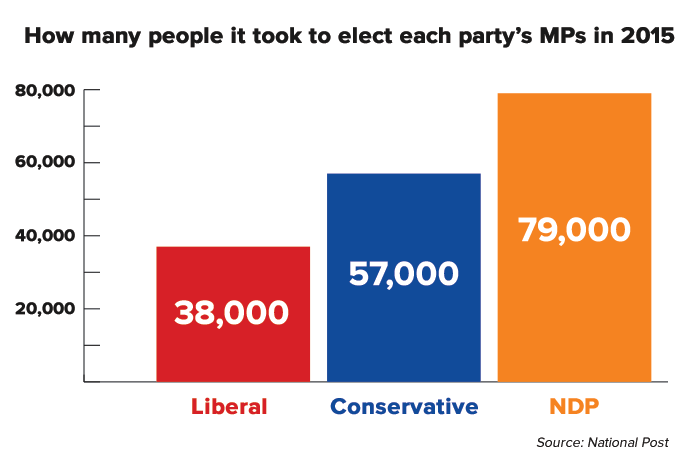 Not included in the chart above (because the system is so distorted it broke our chart) are the 603,000 people it took to elect just one Green MP.

And that's not a one-time aberration – here's a look at the strangest election results FPTP has produced in Canadian history:

During the last election before the outbreak of the Second World War, five parties participated in the 1935 federal election.

The Liberals won a 173-seat majority with 44.7% of the vote, while the four opposition parties split the remaining 72 seats in the 245-seat Parliament.

The short-lived Reconstruction Party pulled in 400,000 votes (nearly 9% of the total vote) and was awarded a single seat.

The Liberals received 40.5% of the vote, compared to the PCs 38.5%, but won fewer seats. Diefenbaker became Prime Minister in a minority government.

In a province where only two parties were competitive, you'd think there'd be a clear cut winner.

Well, the 1974 New Brunswick election resulted in Richard Hatfield's PCs winning a majority government even though they received fewer votes than the Liberals.

Even though Pierre Trudeau's Liberals received 40.1% of the votes in the 1979 federal election, Joe Clark's PCs, who took in 35.9% of the vote, formed a minority government with 136 seats to the Liberals' 114.

Meanwhile in B.C., it seems like FPTP is annoying people on both sides of the spectrum

The provincial NDP formed a majority government after the 1996 B.C. election, despite winning fewer votes than the B.C. Liberals. But five years later, the NDP was reduced to 2 seats despite getting 21.6% of the vote.

Only problem? The governing PCs lost party status and was reduced to 2 seats with 16% of the vote while the separatist Bloc Quebecois became the Oifficial Opposition with only 13.5% of the vote (and 54 seats), eclipsing Preston Manning's Reform Party, which received 18.7% of the vote and 52 seats.

So is everyone's voice given equal weight under our First-Past-the-Post voting system?

That's a question worth thinking about as Canada's debate on electoral reform continues.