85.5% of Conservative questions on electoral reform were spent repeating the same talking point

Think Conservatives sound like a broken record on electoral reform?

The numbers say you're right!

If you've tuned in to Question Period since the last election, federal Conservatives seem to have one response and one response only whenever anyone brings up the question of reforming Canada's electoral system: referendum!

And if you think that's an unproductive and obstructionist approach to multi-partisan efforts to improve Canadian democracy, you can thank Democratic Reform Minster Pierre Poilievre for that.

Poilievre was first to float the referendum talking point back in June 2015, and later proposed a law that would "ban any government from changing our voting system without holding a referendum."

EXCLUSIVE: Tories will require referendum before any change to electoral system http://t.co/4XqGBJwb16 pic.twitter.com/EV3SiOgv4j

Remember: that's the same guy who rammed through a new election law despite a widespread public outcry.

And besides, the Liberal government says they aren't planning on holding a referendum. So case closed, right?

Flash forward to 2016 and it seems like the Conservatives position has not evolved since Poilievre first floated the "referendum" talking point last summer – making you wonder if the party has even tried to come up with any new ideas?

Consider this: there have only been 72 Question Periods since the last election. 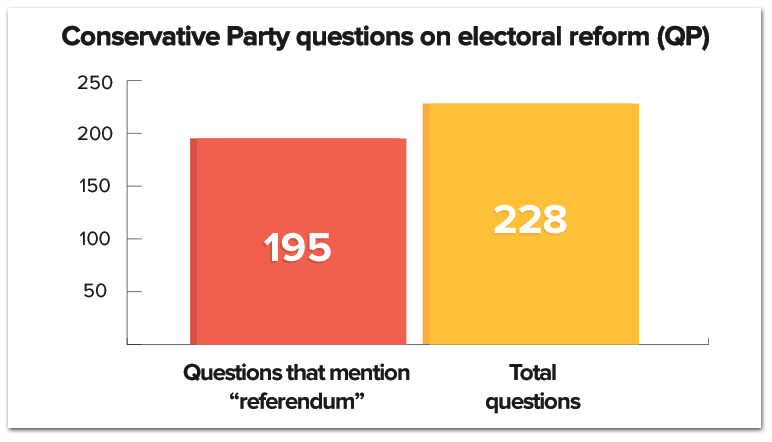 That works out to 97.5 minutes of a total 114 minutes allotted to debating electoral reform:

But this summer, MPs have convened a special all-party parliamentary committee on electoral reform.

Think they'll be trading in Poilievre's talking points for something more constructive?

Well, during the committee's first three meetings with witnesses, the Conservatives spent 35 of 48 questions talking about referendums: 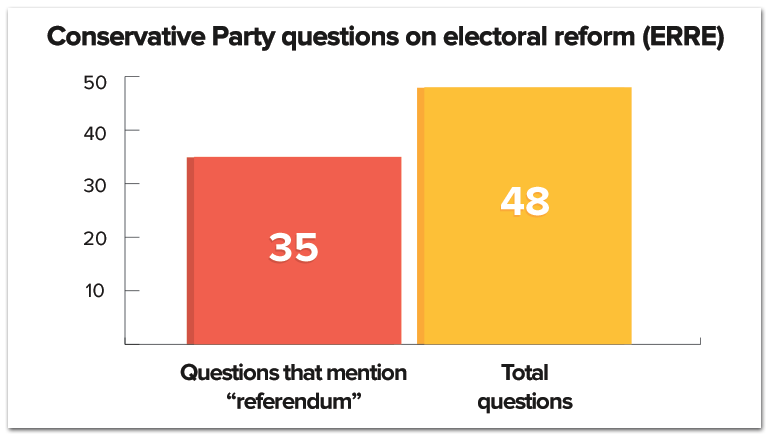 And if you brought a stop-watch to the committee, you'd realize two-thirds of the time Conservatives' time questioning witnesses was related to referendums:

Maybe it's time for Conservatives to change their tune?