Conservatives like to remind the rest of us there's a War on Christmas™.

So, of course, they must know a thing or two about the true meaning of Christmas, right? Of course!

Here are eight lessons Conservatives taught us about the true meaning of Christmas from Conservative Christmases past:

1. It is not your responsibility to feed a hungry child

"Is it my job to feed my neighbour's child?" once asked former Industry Minister James Moore.

Moore's comments, coming only a week before Christmas 2013, echoed similar lessons about the true meaning of Christmas you might find in a Charles Dickens novel. 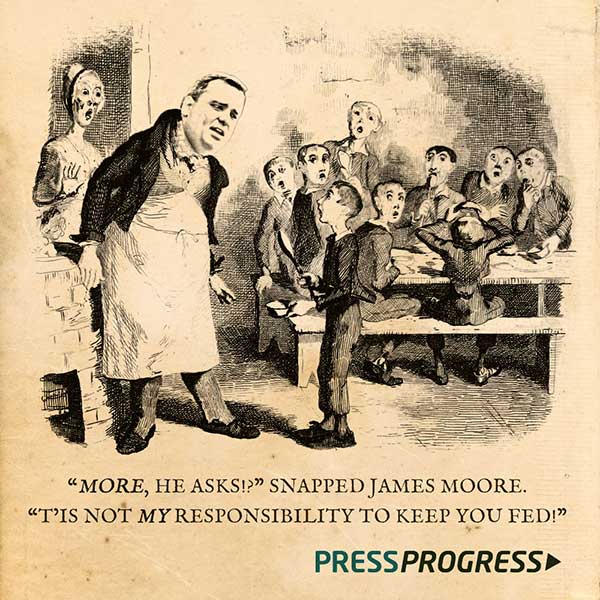 2. If you ignore the plight of the poor, you don't have to worry about it

Last December, former Environment Minister Leona Aglukkaq was asked tough questions in the House of Commons about reports people in her riding had been forced to sift through a local landfill in search of food.

Aglukkaq's response? She ignored the question and read a newspaper instead.

3. Never ever question the citizenship of Santa Claus

Stephen Harper's former parliamentary secretary Paul Calandra once defended the citizenship of Santa Claus in the House of Commons, declaring:

"I will of course do my best to stand up for Santa Claus each and every day in this House, that includes in question period. He is a Canadian citizen, and we will defend him all the way to the United Nations when we make our claim for the North Pole. I am proud of that."

"I ask the Liberal Party to join with us in protecting the citizenship of Santa Claus."

But after losing the election, Calandra seemed to concede the Conservatives may have had a double-standard in how vigorously they defended the the rights of Canadian citizens who are real human beings, as opposed to, say, mythological elves.

"Obviously, yeah, in retrospect [it was a mistake] ... There was a lot of confusion and a lot of first-generation Canadians said 'OK, we're not ready to endorse that'."

4. Coal is a perfect stocking stuffer

Have you considered giving your loved ones coal for Christmas?

Stuff your stockings with #BC coal: http://t.co/1QQhoBfhrd

"No matter whether you light the menorah, trim the tree or setup the Festivus Pole, your holiday activities likely have a connection to a lump of coal mined right here in British Columbia," reads the 100% real press release.

5. Jesus was in favour of tough on crime penalties and draconian surveillance measures

Some people claim Jesus was born to bring forth the message to "love one another."

But others, like former Conservative MP Wai Young, suggest he likely would have supported the Conservatives' tough on crime penalties and  draconian surveillance measures contained in Bill C-51.

6. "Peace and goodwill to all" has a well-known anti-Conservative bias

Christmas is a time when many Canadians give generously to charities.

The Conservatives were no different, putting aside a goodly $5 million each year for charities in 2012.

The only catch was that money was actually to step up audits of charities whose work touches on issues relating to poverty, foreign aid, human rights and the environment, something critics say were selective and politically motivated audits.

7. There are economic benefits to having a green Christmas – like golf

Although Canada boasted the worst climate change record in the industrialized world under Stephen Harper, an internal memo to former Natural Resources Minister Joe Oliver released to PressProgress under access to information last year shows the Harper Government was preparing to "adapt" to the change – and even reap some benefits too.

"Major warm-weather tourism markets in Canada could benefit from climate change, with the golf industry, for example, profiting from increased season length and demand."

The memo also suggests "longer and warmer growing seasons" may allow "crops to be grown further north," something that "would allow the maple syrup industry to expand north."

In case Manitoba's "infidel atheists" missed that message a few short years ago, here's what it would probably look like if he sent that greeting as a Christmas card: 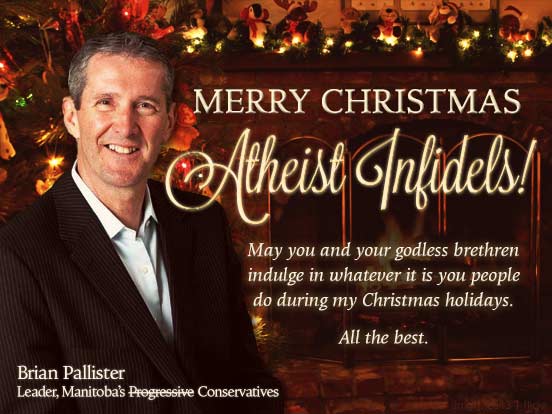