Remind us why Canada is still using an outdated 19th century electoral system?

Canada's first-past-the-post electoral system has been around since before the light bulb was invented, and it kinda shows, with over half of all Canadian voters in the 2015 election finding themselves left in the dark.

According to a new report on electoral reform from the Broadbent Institute, nine million out of the 17.5 million votes cast during the last election "effectively didn't matter" thanks to Canada's out-of-date first-past-the-post electoral system.

That's a number of votes so large it's equal to the entire populations of Alberta, Saskatchewan, Manitoba and all the Maritime provinces combined – and those "wasted" votes cut across all party lines.

Conservative voters were the biggest losers under first-past-the-post, with over 2.8 million wasted votes during the 2015 election.

And although the Liberals won a majority government, over 2.3 million Liberal votes did not count. The NDP, meanwhile, saw 2.5 million wasted votes and 565,863 of the Green Party's 602,944 votes were also in vain: 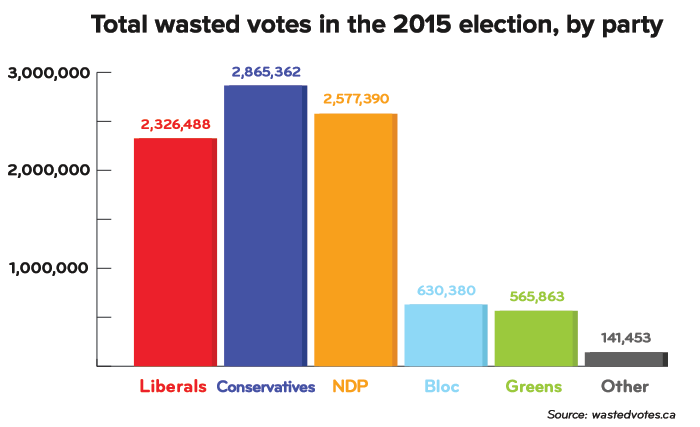 How does this happen?

Under the first-past-the-post system, people in each riding cast votes for the candidate of their choice.

Each riding's representative is selected on a winner-takes-all basis, even if the majority of voters in the riding supported somebody else.

In concrete terms, a majority of voters in 205 of Canada's 338 ridings marked an X for a candidate who did not win. Here is what that looks like according to the current House of Commons seating chart:

When you add it all up, what you get is a Parliament that does not accurately represent how the electorate really voted. 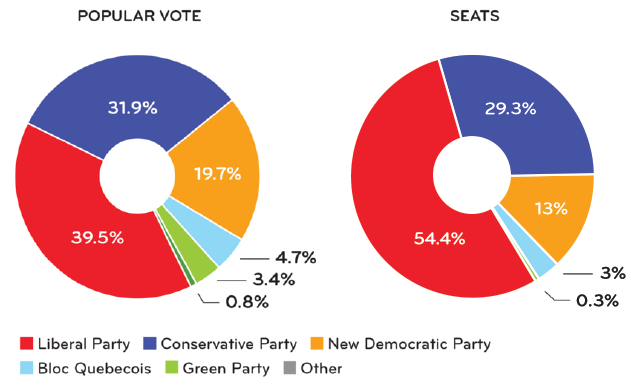 "False majorities" are a recurring problem with the first-past-the-post system. As the Broadbent Institute report points out:

"Our FPTP system does a bad job at translating the votes of Canadians into a distribution of seats that matches the preferences of voters. Instead, it produces distorted outcomes, perverse incentives, and wasted votes. It’s unfair, it’s unrepresentative of certain populations, and it contributes to disengagement."

Since the end of the First World War, 14 of Canada's 18 majority governments have seen the winning party form government even though they did not receive a majority of the popular vote. 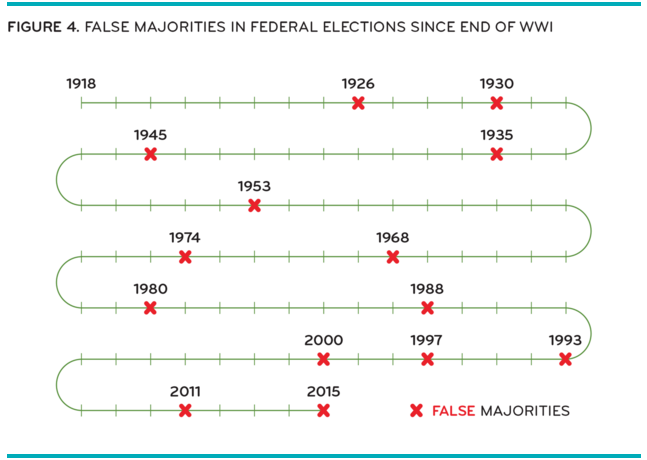 And 2015 was far from the most distorted outcome.

Although first-past-the-post has produced many strange outcomes, the 1993 federal election might be the weirdest, with Jean Chretien's Liberals forming a majority government with 41% of the vote and 177 seats.

The Progressive Conservatives, who had previously been in government, were reduced to two seats despite winning 16% of the vote and the Bloc Quebecois became Official Opposition with 54 seats, despite receiving 13.5% of the vote.

Poor Preston Manning – Manning's Reform Party was was three seats shy of becoming Official Opposition, even though they received 18.7% of the vote, which is 5.2% votes more than the Bloc Quebecois received.