The Mounties always get their man.

But a newly disclosed intelligence assessment from the RCMP looking at the "anti-Canada petroleum movement" suggests the same might not always be true about their facts.

First reported in La Presse, and again Monday in the Globe and Mail, the RCMP report dated January 2014 warns of "a growing, highly organized and well-financed anti-Canada petroleum movement that consists of peaceful activists, militants and violent extremists who are opposed to society's reliance on fossil fuels."

The report surfaces amidst fresh debate in Parliament over the Tories new anti-terror legislation and its potential use against groups involved in peaceful protest and legitimate dissent. The Harper government already has a proven track record for gathering intelligence on opponents of the oil sands.

While an RCMP spokesman assured the Globe that "there is no focus on environmental groups, but rather on the broader criminal threats to Canada's critical infrastructure," the report states that "within the anti-petroleum environmental movement, the law enforcement and security intelligence communities have detected a small, but violent-prone faction" who are capable of engaging "in criminal activitiy to attempt to shut down the Canadian petroleum industry."

But a closer look at the intelligence assessment reveals much of the report relies on information patched together from sources like oil industry lobbyists and media outlets sympathetic to the oil industry -- in some cases leading to bizarre conclusions.

1. The RCMP labels environmentalism as the "anti-petroleum movement"

A little inflammatory? Even the Globe and Mail found this "highly charged language."

An RCMP spokesman "would not comment on the tone" of the assessment, which the Globe adds "suggests opposition to resource develpment runs counter to Canada's national interest" and links well-known enviromental NGOs "to growing militancy in the 'anti-petroleum movement'."

2. They lead off their "background" section by quoting oil lobbyists

Has the Harper government's cuts left the RCMP so hard up for cash that they've turned their intelligence reports into advertorials?

3. They cite a poll conducted by a think tank headed by oilmen and connected to the birth of the Reform Party

The assessment goes on to cite a 2013 poll conducted by the Canada West Foundation, a right-leaning think tank founded by individuals linked to the oil industry and connected to the Reform Party in the 1980s.

Not included in the RCMP's backgrounder is their finding that "barely one-third agree that the oil and gas industry does a good job of respecting the views of local communities affected by resource development."

The assessment also assumes a tone of skepticism towards environmental science that is clearly absent in the RCMP's glowing review of the virtues of the oil indistury.

Qualifying the positions of environmentalists with tentative words like "claim" and "reportedly," the RCMP assessment goes so far as to suggest representatives of the "anti-Canadian petroleum movement" say greenhouse gas emissions are "reportedly" linked to fossil fuels.

Does anyone on either side of the debate actually dispute that burning fossil fuels produces, say, carbon dioxide? Environment Canada sure doesn't. This is basic science.

Looking at "the increasing impact of social media," the RCMP assessment claims the "anti-Canadian petroleum movement" is using social media to "mobilize young people," a point backed up by Oxford University professor Dr. Alan McHughen -- who expresses concern that "impressionable students" who wish to "save the planet" are being targeted.

Except this is completely wrong: McHughen wasn't talking about the 'anti-petroleum' movement, he was talking about genetically modified food in a National Post article titled "Who's afraid of GMOs?" 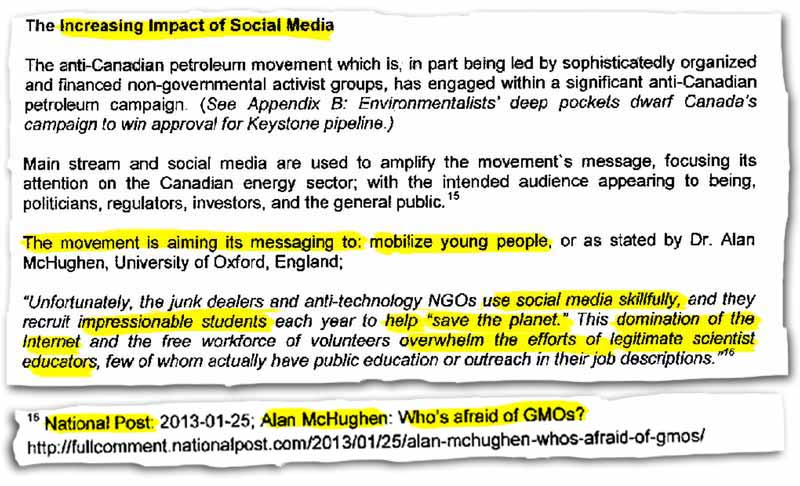 6. Social media is being used to "exaggerate" claims

The assessment adds that social media is being used to "exaggerate" environmental damage and "challenge" the integrity of the oil industry:

The footnote leads to an unsourced list of 'claims' and 'facts' that claims the oil sands account for less than five per cent of Canada's emissions and less than 0.1% the the world's total greenhouse gas emissions. Not even Natural Resources Canada's own numbers make such glowing claims: 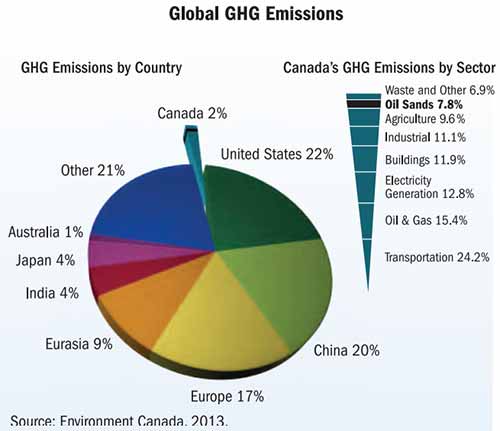 7. Cites blog of grad student who also wrote about privacy concerns re: being labelled as an extremist and monitored by the federal government

Likewise, to elaborate on how the internet is being used to challenge the oil industry, the assessment cites the findings found on a Dalhousie University grad student's blog:

Interestingtly, a cursory review of this source shows the same student's MA thesis discusses how some internet users are concerned about "being labelled as an extremist by the Canadian federal government" based on online activity relating to the oil industry:


8. Financial data on environmental groups entirely from the Financial Post

The assessment's data on the funding sources of environmental groups also relies entirely on one article by Vivian Krause, a critic of the environmental movement whom has been described as "one of the most controversial figures in the rather incredible battle shaping up over the Northern Gateway pipeline" by the Vancouver Sun's Peter O'Neil.

Green with envy: Canada should follow these clean energy leaders