According to a new Angus Reid poll, 6% of all Canadians say Canada's anachronistic, scandal-plagued Senate should be "left as it is." 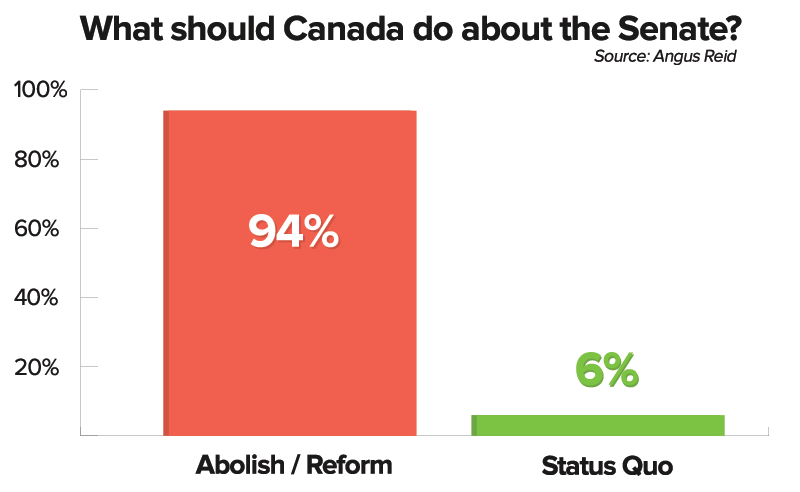 On the other hand, 94% of Canadians say the Senate should be reformed or abolished altogether.

Two-in-three Canadians (64%) also say the Senate is "too damaged to ever earn their goodwill" and 71% said they think reforming or abolishing the Senate "is important enough that we should try to change the constitution."

But back to the 6% of Canadians who support the status quo: come on guys, really? Seriously?

Do we need to spell out what's wrong with the Senate? Well, okay then:

On a visit to Canada from the Soviet Union, Mikhael Gorbachev once said he was confused how citizens of a democratic country like Canada "could put up with legislators who were appointed for life?"

Senators actually face mandatory retirement at age 75, but you get the drift.

Unlike the House of Commons, the Senate is an unelected body and even though they have the power to overturn legislation (which they do), they don't have to explain their votes to anybody.

Once appointed, senators earn a $145,400 per year base salary regardless of whether they do good work or even bother showing up for their job every day. Constitutionally, senators can only be removed from the Red Chamber for offences like "treason" or "adherence to a foreign power".

It's not really "independent":

Stephen Harper liked to claim "the Senate is an independent body," but not too many people believed him.

One big clue could have been the way Senator Carolyn Stewart-Olsen would start e-mails to the Prime Minister's chief of staff by reminding him she's "always ready to do exactly what is asked":

Plus, there's all those senators who conspired with the PMO to sweep the Duffy fiasco under the rug.

And Duffy, of course, was so "independent" he regularly appeared at partisan Conservative fundraising events.

Add to that Trudeau's chief representative among these "independent" senators appointed a whip this week whose job, presumably, will not be to enforce party discipline among the independent "Senate Liberals," even though that's what a whip usually does.

Of course everyone in Canada knows about Senator Duffy.

Then there were all the senators that worked behind the scenes to keep the lid sealed on the Duffy fiasco.

And let's not forget Senators Wallin, Brazeau and Harb.

Before them, there was Senator Raymond Lavigne, who was suspended from the Liberal Senate caucus after inappropriate expense claims, though he continued to spend taxpayer money on travel, hospitality and office expenses on top of his salary before finally being convicted of fraud.

Senator Nancy Ruth was also upset about the prospects of being forced to eat "ice-cold Camembert with broken crackers" after auditors looked into her expense claims.

And those are just a few examples among many to choose from.

It was built to protect the rich from the will of the people:

As former Conservative Senator Hugh Segal – who supports abolishing the Senate altogether – sums up the paternalistic thinking of the Fathers of Confederation:

"The Fathers of Confederation – I use the term advisedly – weren't prepared to actually trust the people with all the democratic decision-making they deserved."

So there's a couple of things to think about, you 6%ers, wherever you are out there!