Derek Fildebrandt woke up to accusations he's double-dipping from Alberta taxpayers, but the United Conservative MLA insists there is nothing wrong with an MLA making a little cash on the side transforming his publicly-subsidized condo into an income property through Airbnb.

In fact, the former Wildrose finance critic actually thinks he's the real victim here – and he has an interesting theory about who stabbed him in the back.

"Although he said he's done nothing wrong, Fildebrandt accused former Wildrose leader Brian Jean's 'backroom operators' of 'personal smears' over the apartment on the day after he was critical of his former boss."

Only a day earlier, Fildebrandt announced he would not join Jean and Jason Kenney in competing for the leadership of Alberta's new United Conservative Party – a merger of Alberta's defunct Wildrose and Progressive Conservative parties.

But when he made that announcement, he also unleashed a blistering personal attack on his former leader.

Speaking to reporters, Fildebrandt, who champions a "no holds barred libertarianism," blasted his former boss for a "leadership style" that puts the "individual" ahead of the "collective":

"I've had two-and-a-half years to work with him and seen his leadership up close, and I've got more than enough experience to make a very confident decision that he is not the best man to lead the party and lead Alberta," (Fildebrandt) told reporters.

"I've seen a leadership style that focused more on making the party about a single individual than a greater collective. I want a leader who is going to focus on building a party and building a team, and not just promoting themselves and their own personal brand."

How much have things changed since the day the two men stood shoulder-to-shoulder at Jean's Wildrose leadership launch and Fildebrandt said unequivocally: "I think Brian is the best guy to lead this party." 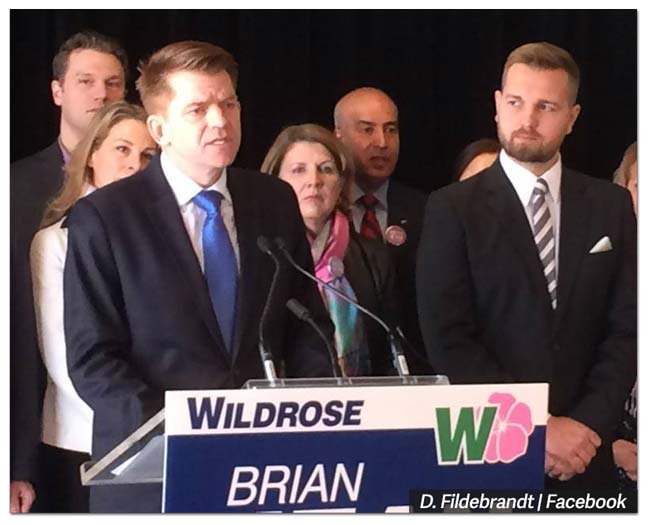 Here's a quick look back at the ups and downs in Fildebrandt and Jean's rocky relationship:

November 7, 2014: Fildebrandt announces he's leaving the Canadian Taxpayers Federation, where he's worked since he was 23 years old. Without explaining what triggered the departure, Fildebrandt voluntarily addresses "speculation" that he "will seek a seat in the Legislative Assembly," something he says he's "been approached about" but doesn't "see it in the cards."

May 11, 2015: Following Alberta's election of an NDP majority government, Jean taps the 29-year-old rookie MLA as a senior member of the Wildrose shadow cabinet, giving Fildebrandt a prestigious role as critic for Finance and Treasury Board.

October 28, 2015: Reacting to the 2015 budget, in what one member of the press described as "the biggest scrum of his life," Fildebrandt embarrasses his leader when he snaps at a Globe and Mail reporter, stating he's "not taking questions from political journalists" who "don't conduct themselves professionally." Jean, standing next to Fildebrandt, proceeds to answer the question.

Credit to @BrianJeanWRP, who answered @CarrieTait's question that colleague @Dfildebrandt refused to answer without explaining why.

May 27, 2016: Wildrose party apologizes on behalf of Fildebrandt after Fildebrandt shouts insults at Ontario Premier Kathleen Wynne during an official visit to the Alberta Legislature.

May 28, 2016: After getting entangled in a homophobic gaffe on social media directed at Wynne, Fildebrandt is suspended from Wildrose caucus. In a statement, Jean says Fildebrandt's comment "does not reflect the values of the Wildrose caucus."

May 30, 2016: Jean reportedly faces a caucus backlash and announces Fildebrandt will be welcomed back to caucus, provided he completes anger management courses, have no access to the media and hire someone to operate his social media accounts.

December 16, 2016: During the Wildrose AGM, Jean rejects Kenney's call for a PC-Wildrose merger but Fildebrandt publicly breaks ranks with his leader and openly backs Kenney's plan – the first Wildrose MLA to do so.

January 26, 2017: Jean flip-flops on PC-Wildrose merger, says he'll accept the plan if his membership wants it, but vows to run for leadership of the new party.

February 1, 2017: Fildebrandt begins holding public meetings calling for Wildrose to be dissolved and merged with the PCs.

May 17, 2017: Fildebrandt says he is not ruling out a possible run for leadership of the newly merged party. The same day, Jean announces he is investigating allegations Fildebrandt accepted illegal corporate donations at multiple unite-the-right meetings.

May 26, 2017: Fildebrandt pens Calgary Herald op-ed calling on a newly merged party to reject "self-censorship," going so far as to criticize an unnamed leader for apologizing over gaffes:

"The line between good manners and self-censorship was crossed long ago, and no accommodation or compromise on our part will ever be enough to appease the hurt-feeling police. Leaders should fight political correctness with courage, or it will bury us with every apology that we make."

May 30, 2017: As Jean reacts to a new BC government by pledging to build "good relationships" with Alberta's neighbours, Fildebrandt trips up his leader's message when he tweets that "the inmates are running the asylum" in BC:

July 24, 2017: Two days after PC and Wildrose members vote to merge, Jean is first out of the gate in announcing his bid to lead the new United Conservative Party. The next day, in an interview with CBC News, Fildebrandt says: "I'm ruling out endorsing Brian Jean."

August 8, 2017: Fildebrandt announces he will not seek the leadership of the UCP and unloads a blistering personal attack on Jean, criticizing his "leadership style" and claiming he's only interested in promoting his "personal brand."

August 9, 2017: The Edmonton Journal publishes details about Fildebrandt earning income through Airbnb on his publicly-subsidized condo.