One candidate for leader of Alberta's new United Conservative Party is denouncing Ezra Levant's Rebel Media – a major ally of the UCP – for "defending Nazis."

On Saturday, one person was killed and 34 injured in Charlottesville, Virginia following a car attack by an "alt-right" terrorist at a rally attended by "white supremacists" and "Nazis," according to Virginia Governor Terry McAuliffe.

Toronto-based Rebel Media personality Faith Goldy was at the rally in the quiet college town of Charlottesville, home to the University of Virginia, streaming live commentary over social media expressing sympathy for white supremacists.

"There has been a rising in, I think, white racial consciousness," Goldy said. "I think a lot of white men, specifically, this seems to be their struggle — are mad as hell and they're not gonna take it anymore."

Later, Goldy directed her audience to an armed alt-right protester: "look at this guy: trying to civilize them. They're here for your freedom."

As she waded through a counter-protest complaining it was a "double standard" that anti-racists were "allowed to march" after police declared the white supremacist rally an "unlawful assembly," a car driven by a member of a neo-Nazi group crashed into the same crowd of people the Rebel Media correspondent had been insulting only seconds earlier: 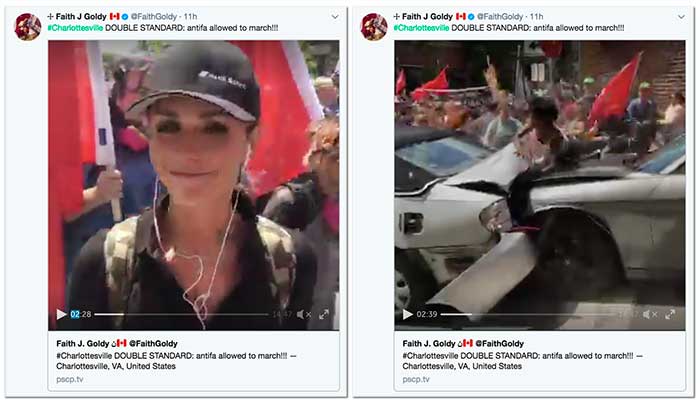 Schweitzer also called on Jason Kenney and Brian Jean – two fellow UCP leadership candidates who have both repeatedly appeared as Rebel Media guests, Jean has even hired Rebel Media's co-founder as his campaign manager – to make a clear statement on Rebel Media's "racism" and "alt-right garbage":

It is time for Albertans to say enough to this alt right garbage. Racism is racism. Not in our Alberta. /2 #Charlotteville #ableg #ucp

For their part, Goldy claims Rebel Media wasn't defending neo-Nazis at a white supremacist rally, the Canadian media outlet was simply defending the "first amendment" of the United States constitution.

Is Rebel Media really defending free speech or are they actually pandering to extremists?

Well, hours after the attack, Goldy praised a manifesto written by neo-Nazi leader Richard Spencer for its "robust" and "well thought out ideas" – the first three points of Spencer's manifesto discuss the "Aryan" race, "Jews" (or, as Goldy calls it the "JQ" or Jewish Question) and declares that "racially or ethnically defined states are legitimate and necessary."

So, @KellieLeitch is at a rally organized by a website that puts out videos like this? #cdnpoli #cpcldr pic.twitter.com/HcAXH5nJJs

When McInnes told Spencer "I work for a Jew named Ezra Levant" and asked him what he thought about that, the "alt-right leader" replied he wasn't bothered because Rebel Media is "kind of pushing things in our direction." 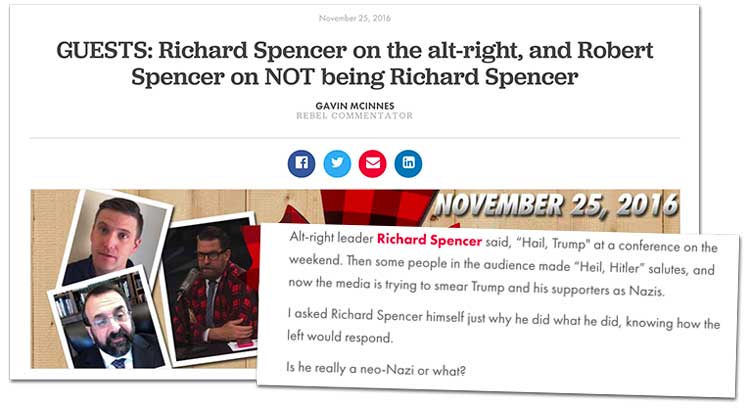 In fact, by his own admission, McInnes has his own checkered history "defending" Nazis.

During a Rebel Media trip to Israel earlier this year, McInnes filmed a video that received praise from neo-Nazis and the former Grand Wizard of the Ku Klux Klan, wherein the Rebel Media host questioning key details about the holocaust and suggested Jews were responsible for both the Second World War and the Ukrainian Holodomor.

"I felt myself defending the super far-right Nazis," McInnes says in the video that quickly drew condemnation around the world.

McInnes, founder of the alt-right "Proud Boys" street fighting group, also played a role actively spreading disinformation on social media in the wake of the attack.

Saturday afternoon, McInnes falsely identified a Michigan youth as the "car terrorist," telling his 200,000 Twitter followers that the car with an Ohio license plate may have been driven by a "lefty who thought he was mowing down racists."

Of course, the "terrorist" was not the innocent man identified by the Rebel Media personality – it was a member of a neo-Nazi group calling for "American fascism" to protect "the interests of White America" against a "rootless group of international Jews." 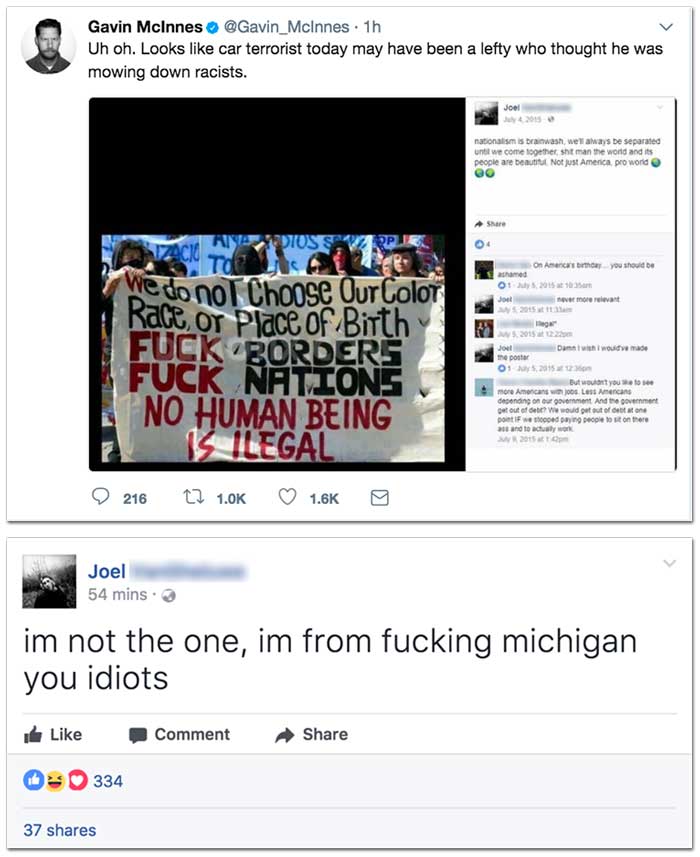 After his false allegation had been retweeted over 1,000 times, McInnes quietly deleted his tweet several hours later.