How did Stephanie Kusie win the Conservative nomination in Jason Kenney's old riding?

According to one right-wing anti-abortion group, Kusie can thank the efforts of dozens of anti-abortion activists who showed up to vote for the "pro-life candidate" at the Conservative nomination meeting in Calgary-Midnapore last week.

That seems fitting – the same group says they're working behind the scenes to help Kenney take over Alberta's Progressive Conservatives too.

Hayward calls Kusie "our pro-life candidate" and says her win is "another tick in the win column."

The e-mail goes on to describe how the anti-abortion group mobilized a supporters to vote at the nomination meeting and suggests "Stephanie would have lost the nomination" without "57 votes" cast by "Right Now volunteers":

"It was a close race. Really close.

According to our sources, our pro-life candidate (Stephanie Kusie) won on the second ballot by a 3.8% margin. This translated into 42 votes out of over 1,100 cast.

RightNow was able to provide over 10% of the GOTV (Get Out The Vote) volunteers. Considering that the GOTV team was able to get out 570 votes for Stephanie, this means that RightNow volunteers accounted for 57 votes on nomination day. Without RightNow GOTV volunteers, Stephanie would have lost the nomination."

The e-mail links to resources on the group's website that counsel anti-abortion activists on taking over political parties from the bottom-up to steer them towards "more pro-life" positions.

For example, they recommend buying party memberships and stacking nomination meetings – they even offer tips on taking over the boards of individual Conservative riding associations to "help nominate a pro-life candidate" and "elect pro-lifers as delegates to the national policy convention."

In a message to supporters, co-founder Alissa Golob called on anti-abortion activists to "buy a PC membership" so "you can vote for Keneny" and make him Alberta's "pro-life premier."

"Kenney is arguably one of the highest profile pro-life politicians Canada has ever had," Golob told supporters.

"Jason Kenney is a pro-life politician," she added, stressing "this leadership race is a top priority":

"If you live in Alberta, buy a PC membership. I don't care if you're a PC party supporter or not. Buy a membership (only $10) and attend the delegate selection meeting in your riding (after you sign-up, your riding association will e-mail you the location and time). That is the only way you can vote for Kenney, and believe me, you want to vote for Kenney. If you support the Wildrose, then this doesn't mean you have to stop. It just means that you get a say as to who will be leader of the PC Party. The more pro-life leaders we have leading provincial parties the better. With Brian Jean's perfect voting record, and Jason Kenney’s perfect pro-life voting record, we can't lose."

Below is a screen shot of the group's e-mail boasting about helping Kusie win the nomination in Kenney's old riding earlier this week: 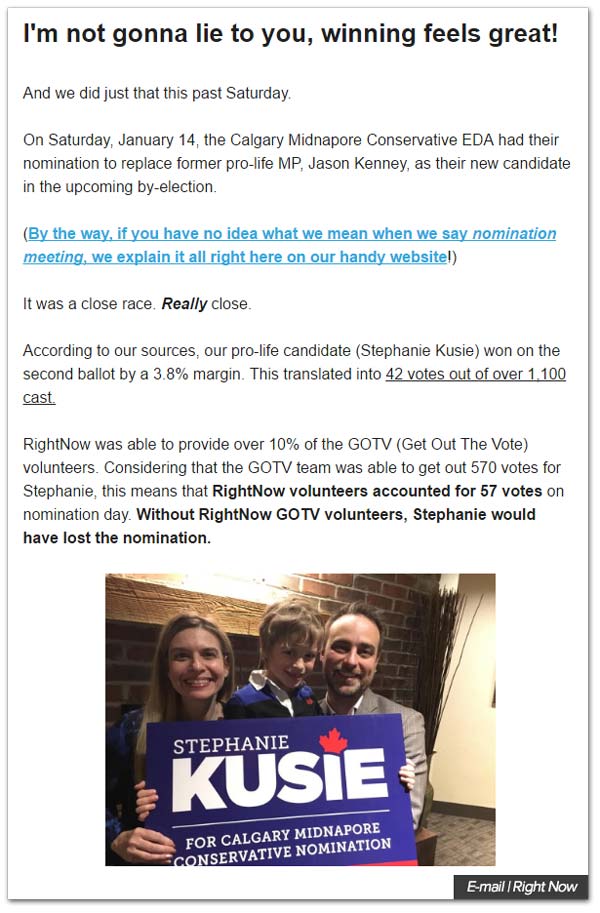