The leader of a right-wing anti-abortion group is calling on the group's supporters to buy up memberships in Alberta's Progressive Conservative Party as part of a "strategic" plan to help make Jason Kenney Alberta's "pro-life premier."

In a recent message to supporters, Alissa Golob, head of "Right Now," an organization "formed to nominate and elect pro-life politicians," tells supporters to go out and "buy a PC membership" so "you can vote for Kenney."

Golob, who was previously executive director of Campaign Life Coalition's youth wing and a frequent guest on Sun TV, also suggests Wildrose supporters could take out PC memberships to help Kenney seize control of the party and still continue to "support the Wildrose."

It doesn't even matter "if you're a PC party supporter or not." 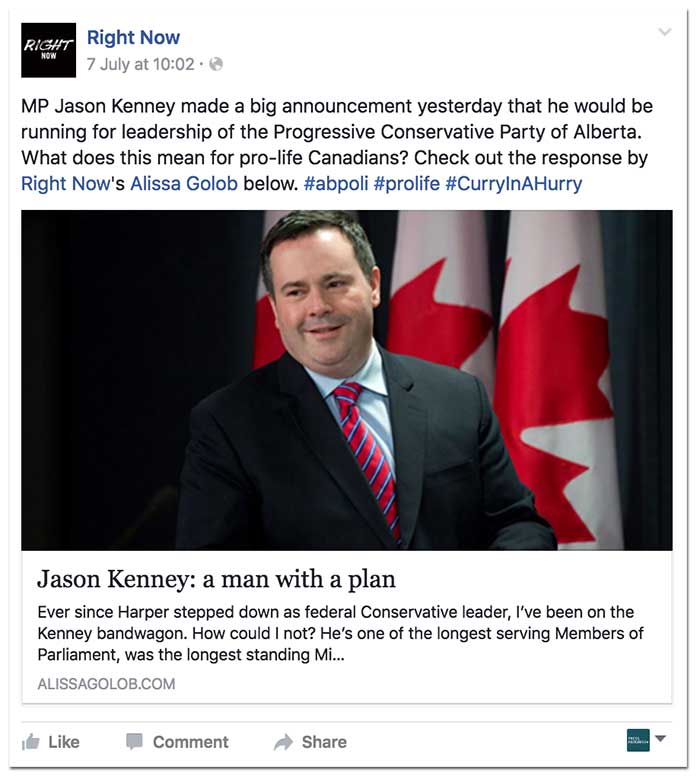 "Kenney is arguably one of the highest profile pro-life politicians Canada has ever had," Golob explains to supporters.

"Jason Kenney is a pro-life politician," she adds, "hence why this leadership race is a top priority."

She also tells supporters that Alberta "could have a pro-life premier" if anti-abortion activists start taking "strategic" actions:

"If you live in Alberta, buy a PC membership. I don't care if you're a PC party supporter or not. Buy a membership (only $10) and attend the delegate selection meeting in your riding (after you sign-up, your riding association will e-mail you the location and time). That is the only way you can vote for Kenney, and believe me, you want to vote for Kenney. If you support the Wildrose, then this doesn't mean you have to stop. It just means that you get a say as to who will be leader of the PC Party. The more pro-life leaders we have leading provincial parties the better. With Brian Jean's perfect voting record, and Jason Kenney’s perfect pro-life voting record, we can't lose."

What calibre of new PC members could Golob attract in support of Team Kenney?

That campaign triggered backlashes in communities across Canada, with many calling the flyers "shocking" and "disgusting." The mayor of Mississauga denounced the "graphic and unsolicited flyers" for being "carelessly distributed to the doorsteps of our residents where innocent children could see them."

But now, now: Kenney claims his position on abortion has been "consistent since I first ran for Parliament in 1997," and boldly alleges that "in my 20 years in Parliament I haven't given a speech about this, let alone proposed a motion or a bill."

That's a creative interpretation of his record:

• According to Campaign Life Coalition, Jason Kenney has a perfect voting record on "life and family issues," voting on a number of occasions in favour of legislation criticized as attempts to undermine the reproductive rights of Canadian women.

• In 2012, Jason Kenney voted in favour of Motion 312, a failed bid to redefine Canada's legal definition of a human being, viewed by many as a backdoor to reopening the abortion debate – that motion that was even rejected by Stephen Harper.

• Kenney voted in favour of Motion 83, a failed bid to examine "the medical necessity of abortion." In the House of Commons, Kenney delivered a speech arguing many abortions are "medically unnecessary" procedures and that with "scarce and shrinking dollars" for healthcare, tax dollars would be better spent on MRI machines.

• Kenney delivered another speech in the House of Commons claiming "the right to life" is "inalienable" because constitutional rights are "granted to us by our Creator." 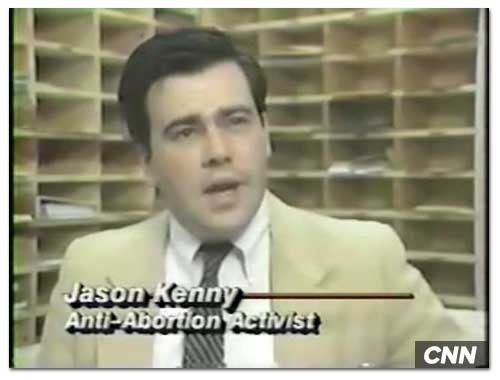 And let's not even get into how Kenney thought a women's group spreading awareness of abortion rights at his old university campus was in some way comparable to allowing the Ku Klux Klan, pedophiles or the Church of Satan peddle their ideas too.

Oh, and here's a photo Golob posted of herself with Kenney at a 2015 fundraising dinner for Campaign Life Coalition following the March for Life, a major anti-abortion protest held in Ottawa each year:

With Minister Kenney at the Rose Dinner! #cdnpoli pic.twitter.com/W6SiX6GZSD

Yeah, he's sure been consistent alright!