The president of Canada's biggest anti-union lobby group, for one.

In fact, according to a flyer promoting the event, not only is Merit Canada president Terrance Oakey co-chairing the big fundraising event – he's handling corporate donations too. 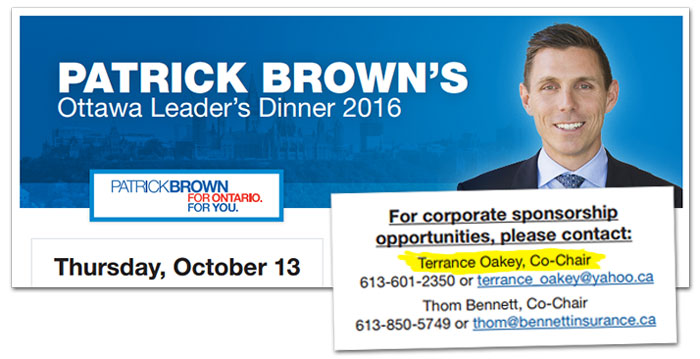 Big surprise? Depends on your point-of-view.

On one hand, Brown has tried to distance himself from former PC leader Tim Hudak's adversarial approach towards labour.

During last year's Ontario PC convention, Brown went so far as to declare that those who "belong to a union ... have a home in the Progressive Conservative Party of Ontario" – quite the change in tone!

On the other hand, it's hard to square that with the reality that the guy handling Brown's corporate donations was also called the "true author" of Stephen Harper's anti-union bill C-377 by one leader in the Canadian Senate.

As a Conservative MP, Brown voted for C-377 along with other controversial anti-union bills too.

Merit Canada is an organization that lobbies on behalf of non-unionized construction companies – and records listed on the website of Canada's Lobbying Commissioner show Oakey has a long history of lobbying federal politicians in support of anti-union legislation.

Folks say "anti-union" like that's a bad thing. Most unions are anti-everything but themselves,yet that's OK? Anti-union is often pro-worker

What should those who "belong to a union" make of Brown's close ties to this kind of lobbyist?

After all, didn't Brown say he's trying to distance himself from this kind of approach towards labour?

Real leadership by @timhudak The power and privilege of the union boss in Ontario may be coming to an end. http://t.co/lpZxgcEq

In his short time at the helm of Ontario's Tories, the rookie leader has gained a reputation as a serial flip-flopper.

During his party's leadership race, Brown won the support of social conservatives with pledges to "repeal" Ontario's sex-ed curriculum.

But once installed as leader, Brown distanced himself from his social conservative base and flip-flopped on sex-ed, explaining he was "comfortable with teachings on sexual orientation and gender identity" – puzzling given he even voted against protecting gender identity as a human right years earlier when he was a Conservative MP.

In light of that, maybe all we're left with is this question from a spokesperson with Canada's biggest anti-abortion group:

"What voter — whether a social conservative or of the left-leaning variety — can possibly trust this man on any issue, be it his approach to carbon taxes, or restoring PC relations with public service unions?"

Is The Ontario PC Party Coming Apart At The Seams?

Listeners Are Calling This Patrick Brown Interview An "Unmitigated Disaster"

Does Patrick Brown know what his teenage candidate thinks about the 'sins' of 'homosexuality'?