Another Liberal flip flop could be on the way!

Finance Minister Bill Morneau avoided multiple questions during Question Period Tuesday about whether or not the Liberal government is planning to back away from a campaign promise to close the stock option loophole.

A day earlier, citing business insiders who had been briefed by Morneau's staff, the Ottawa Citizen reported the government is "expected to drop or at least postpone his party's plans for increasing taxes on employee stock option benefits."

The stock option loophole was identified as a good "starting point" for generating new revenue and making "changes that are needed after ten years of Harper's Conservative government," according to the Liberals' Real Change platform.

The platform's fiscal plan and costing document justified closing that loophole by pointing out "8,000 very high-income Canadians" were shaving over half-a-billion dollars off their personal tax bills each year, an average of $400,000 per "very high-income" Canadian:

For those of you keeping track, that's the latest development in the gradual blurring of this campaign promise.

The finance minister had little to say about the Liberals' stock options plans in November, but Morneau promised more details in the "near term."

And a week later, during his first fiscal update, Morneau announced changes to how stock options are taxed would  not apply to any existing stock options:

"Any stock options that have been issued prior to that date will be under that taxation regime that was in effect prior to that date," Mr. Morneau said. "That I hope should relieve those Canadians who have that concern from taking actions that would be inappropriate."

A Canadian Centre for Policy Alternatives report earlier this year found a majority of Canada's highest paid CEOs are receiving a good chunk of their compensation in the form of stock options, with CEOs being granted an average of $1.9 million in options in 2014.

"Stock options have become the single largest component of compensation among CEOs and senor executives at large public traded companies in Canada," University of Victoria professor Lindsay Tedd has said. "The income earned from stock options is granted preferential tax treatment when compared to other forms of employment remuneration."

"While income earned from stock options is deemed to be ordinary income under our tax laws, a special deduction was created in 1984," Tedds explains, allowing "individuals to deduct 50 per cent of the income derived from exercising stock options."

"That is, only half of the employment benefit from stock options is subject to tax."

With most Canadians seeing 100% of their wages and salaries subject to tax, maybe that's one reason why you can barely see middle class and minimum wage workers when they're stacked side-by-side against Canada's top paid CEOs: 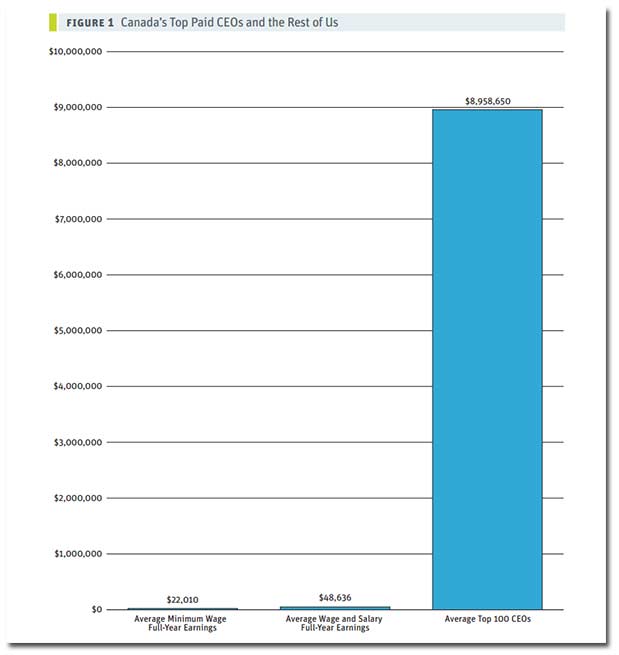 The Citizen suggests "tech executives" have lobbied against the changes, arguing stock options are necessary for start-ups to attract skilled employees while companies are getting up and running.

However, the Liberals had already pledged to exempt up to $100,000 in annual stock options gains to protect start-ups.

Similarly, the NDP had proposed exempting "options granted by early stage companies," something Shopify CEO Tobias Lutke previously indicated would give him confidence in the plan.