Bank of Canada Governor Stephen Poloz has some really bad news to share about the Canadian manufacturing sector.

Or, as the Globe and Mail's Economy Lab editor David Parkinson puts it, "Poloz has just sat Canadians down and given us a national the-dog-has-died talk."

In a statement that was slated to be delivered last week with the release of the bank's quarterly Monetary Policy Report (the event was cancelled following the shooting at the National War Memorial and on Parliament Hill), Poloz was set to talk about Canada's manufacturing export sector has suffered deep and permanent structural damage.

Here's a snippet of Poloz's statement, now posted on the bank's website:

"It is clear that our export sector is less robust than in previous cycles. Last spring, as you may recall, we identified which non-energy subsectors could be expected to lead the recovery in exports, and which would not.

We have since investigated in more detail the subsectors that have been underperforming. After sifting through more than 2,000 product categories, we have found that the value of exports from about a quarter of them has fallen by more than 75 per cent since the year 2000. Had the exports of these products instead risen in line with foreign demand, they would have contributed about $30 billion in additional exports last year.

By correlating these findings with media reports, we could see that many were affected by factory closures or other restructurings. In other words, capacity in these subsectors has simply disappeared. This analysis helps us understand a significant portion of the gap in export performance....

This research has important implications for Canada’s employment picture. We know that when companies restructure or close their doors, the associated job losses are usually permanent. If companies can meet increased export demand with existing capacity, the associated employment gains can be fairly modest, with most of the increase in output coming in the form of higher productivity. The bigger employment gains will come when we enter the rebuilding phase of the cycle – when companies are sufficiently confident about future export demand that they begin to invest in new capacity and create new jobs."

The Globe's Parkinson explains why this has implications that go beyond the manufacturing sector and the workers and communities who rely on those jobs. It's crippled the Canadian economy as a whole, he writes:

"In a regular, garden-variety recession, this isn’t the case. Firms might reduce staff and scale back output, but the production capacity is still there, it’s just not being used. But in deep recessions, such as the one in 2008-09, companies go bust. For a big chunk of Canada’s manufacturing export base, there is no longer a bunch of stuff out there that’s just sitting waiting for someone to turn the lights back on. The plants are gone.

This is why business investment is stubbornly stagnant. This is why the labour market has sputtered. This is why the Bank of Canada, and others, believe the economy’s potential for growth is less than it used to be. Permanent structural damage has been done. It can’t be rebuilt, it needs to be replaced – and that’s a harder, longer, less certain task. It’s why the Bank of Canada is so adamant about the importance of getting businesses back investing in new capacity – that’s how we replace what we’ve lost."

So while the Canadian manufucturing isn't necessarily dead dead, but the outlook isn't optimistic in the foreseeable future.

As Canadian Labour Congress senior economist and Broadbent Institute fellow Angella MacEwen points out, a rebuild is possible. But in the meantime, workers, particularly in Ontario, will shoulder the burden:

"Most surviving manufacturing exporters are still operating at or below capacity. This means we shouldn’t expect a whole lot of business investment in these sectors any time soon.

This permanent loss of capacity isn't truly permanent, we can rebuild, but doing so will take more time, and will wait until conditions are much more certain. This has disastrous consequences for workers, particularly in southern Ontario where much of the loss has been located." 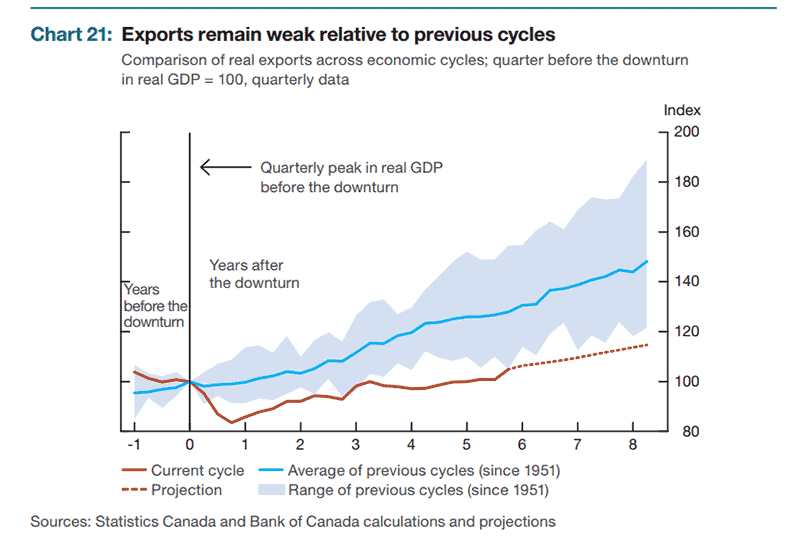