Finance Minister Bill Morneau may not have told the full story.

When Morneau announced the Liberal government would not move forward on a key campaign promise to close a $750 million tax loophole used by CEOs and other "high-income Canadians" last year, he claimed his reversal was in response to feedback from small start-ups.

But Finance Canada documents newly obtained by PressProgress under Access to Information show Morneau forgot a detail or two – the finance minister heard from some old friends on Bay Street too.

At a time when Canada's top CEOs earn 193 times what the average worker earns, the nation's CEOs and corporate executives now take the bulk of their compensation in the form of stock options because they're taxed at half the rate of regular salaries when they're exercised.

During the 2015 election, Trudeau's Liberals pointed to this tax loophole as a way to target wealthy tax dodgers and balance the budget. But six months after taking office, the Liberals broke their promise.

Here's how Morneau explained his flip-flop on the stock options tax loophole on March 22, 2016:

"I heard from many small firms and innovators that they use stock options as a legitimate form of compensation, so we decided not to put that in our budget."

One problem with that explanation: the Liberals themselves trotted out evidence showing the tax loophole was mainly used by Bay Street's wealthy elite.

Closing "the lucrative tax break on stock options" has been part of the Liberal platform for years – in their 2015 edition, the Liberals said Finance Canada data shows "8,000 very high-income Canadians" claimed three-quarters of the $750 million tax loophole:

What could explain Morneau's change of heart?

As it turns out, "small firms and innovators" weren't the only ones nagging the finance minister about stock options – internal documents show Morneau also heard from voices representing those same "very high-income Canadians" who are reducing their taxes with the $750 million loophole.

John Manley is the CEO of the Business Council of Canada (previously the "Canadian Council of Chief Executives") who is also a former Liberal finance minister and deputy prime minister under Jean Chrétien.

Manley warned that "uncertainty" might mean "large volumes of stock options will be exercised," something sure to trigger "sharp market reactions." The lobbyist would plead that any changes to the tax loophole must be grandfathered in – not doing so would be "unfair," explained the man once described as the "voice of Corporate Canada." 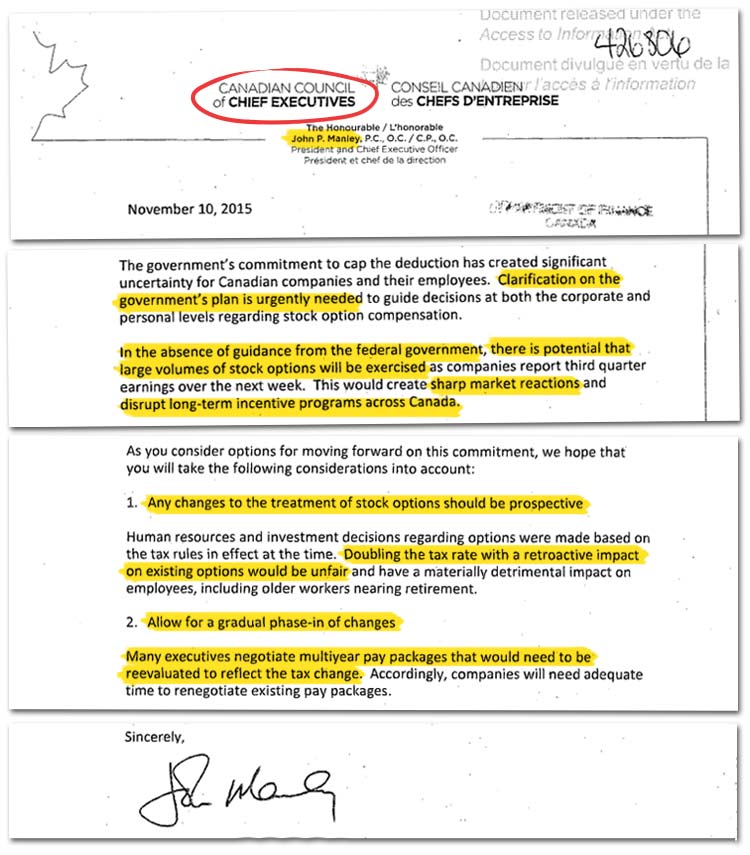 Sure enough, a week later, Morneau did what Manley advised and announced any changes would be grandfathered in, stating "any decision we take on stock options will affect stock options issued from that day forward."

A few days later, Manley wrote a "thank you" letter to Morneau.

"Bill" would reply to "John" thanking him for his "support," telling the lobbyist in a handwritten note: "I look forward to working with you on issues of mutual concern." 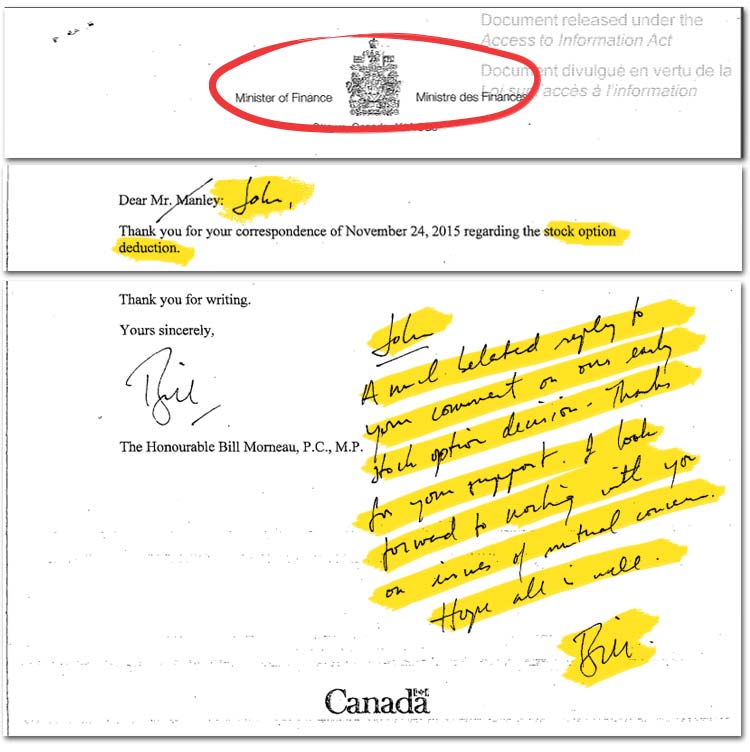 Who else did Morneau hear from?

Wilson advised Morneau that "taxing stock option returns as income" would "discourage innovation in this country" – though he added that if the government was "absolutely committed" to keeping its solemn promise with voters, one possibility could be to "develop an exemption" for small start-ups. 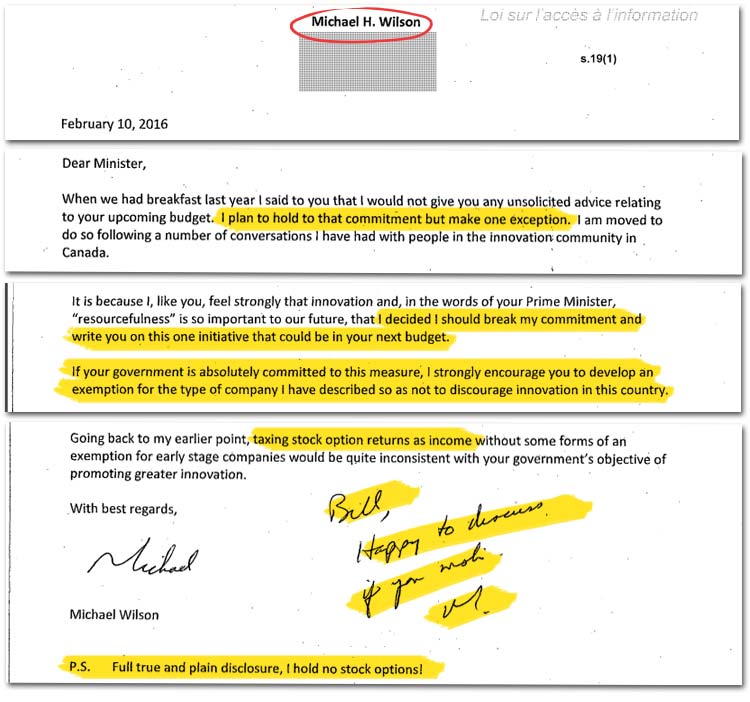 While acknowledging that "the use of stock option plans is widespread and longstanding," Deloitte expressed concern that "recent commentary has focused on the narrow band of high income individuals who profit under such programs."

Deloitte also urged Morneau to consider how a "broad range of employees" benefit from stock options – a claim that appears to be at odds with the Finance Canada data cited by the Liberal platform. 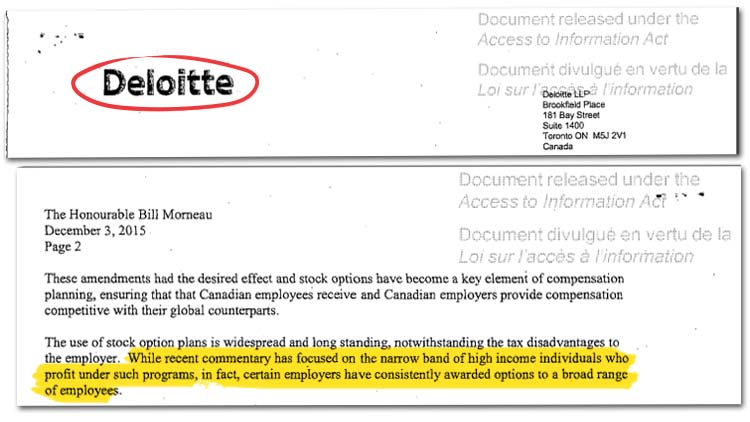 Another corporate executive Morneau heard from said he had "serious concerns" with the Liberal promise to close the stock options tax loophole.

Despite "some noise about how important stock options are in the tech sector," the CEO told Morneau that the more "urgent concern" relates to the impact on "the development of (an) entrepreneurial class" as well as "capital formation."

But Morneau heard something different from tech companies.

Two industry groups told Morneau that closing the tax loophole could have a "disastrous impact" on start-ups, but they noted their partners had already developed "a variety of potential solutions" that could target tax avoidance by "executives at large companies" without impacting "middle-class tech employees."

That echoes what Morneau heard from the Canadian Venture Capital and Private Equity Association.

Although CVCA recommended "the best course of action" would be to "reconsider the stock option tax hike and to signal that this issue will not be revisited in the future," they told Morneau he had options too.

"If the government truly intends on enacting this measure, they should be targeting only the highest income earners from large public companies who regularly receive stock option grants," the CVCA pointed out, suggesting tweaks that could "help avoid some of the significant concerns."

Ultimately, Morneau appears to have been uninterested in their suggested tweaks given he decided to can the idea altogether. He's also ruled out revisiting the issue in the future.

CEOs in Canada earned the equivalent of an average Canadian worker's yearly salary on January 3rd.