Nope, probably not, especially considering the BC Liberal candidate for Vancouver-Fairview once kicked a journalist out of a big money fundraiser just for trying to report what Clark said, decreeing that whatever the Premier says "in front of a private audience" should not be "made public" by reporters.

Before becoming a corporate lobbyist at Fleishman Hillard a few years ago, the aspiring MLA worked as Clark's executive assistant, giving the Premier political advice and also apparently working the door at big money fundraising soirées as a bouncer.

On April 3, 2012, the North Vancouver-Lonsdale Liberal Association held an event at the Pinnacle Hotel billed as "A North Shore Evening with Premier Christy Clark."

One person who received an invitation from the BC Liberal riding association was North Shore News reporter Ben Alldritt, who said he simply "planned to mill around and hear the premier's address" – or so he thought.

According to Alldritt, despite receiving credentials from "Liberal gatekeepers at the door," Clark's personal assistant waded through the crowd of "local businesspeople," took the journalist aside and told him he was at a "private, ticketed event," adding that "when the premier speaks, we would rather her comments not be reported."

Here's how Alldritt describes what happened next:

Then he said it.

'I'm sure you can understand that we don't want comments made in front of a private audience made public,' said Garfinkel, executive assistant to Premier Christy Clark.

Take a moment to think about that one."

Alldritt was forced to leave.

What was Garfinkel worried the public might find out?

One thing Alldritt's report didn't mention was Clark's soirée was attended by some big movers and shakers who've donated hundreds of thousands of dollars to Clark's party at the same time as they were doing public business with Clark's government.

One tweet shows Christy Clark and several BC MLAs posing for a photo with Kyle Washington, Chairman of Seaspan, owner of a major North Vancouver shipyard and shipbuilding company. 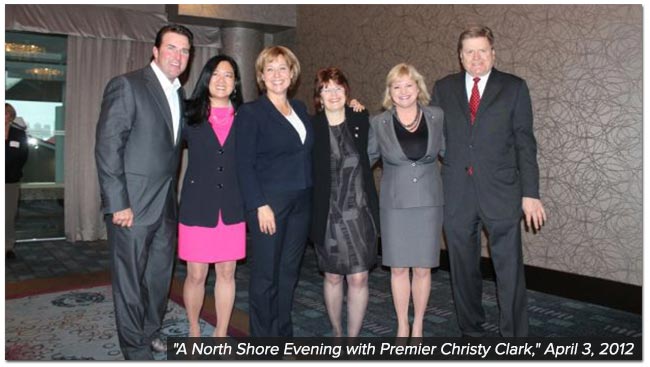 Elections BC records show Washington has personally donated over a hundred thousand dollars to the BC Liberals over the last decade.

Meanwhile, Washington's company has poured an additional $327,000 into the BC Liberals' bank account, including one donation valued at $100,000 just last year – this even as Clark's BC government has awarded Seaspan tens of millions of dollars worth of public contracts and subsidies.

But that's just one example: a recent report from BC watchdog Integrity BC found 177 BC Liberal donors that gave the party $55 million received over $15 billion in government contracts, projects and other payouts over the last decade.

Considering Clark's BC Liberals have created the perception they might be doing public business at their private fundraising events, why wouldn't the Premier's remarks to a private audience be in the public interest?

By the way, records show Seaspan gave the BC Liberals a $10,000 donation one week after the event.

Garfinkel isn't the only one either – Clark's former press secretary left the Premier's Office last year and only a month later he registered to lobby his former boss.