"Corporations are people, my friend," Mitt Romney once said.

But not even the failed Republican presidential candidate advocated giving corporations the right to vote.

However, one person who thinks corporate suffrage is not such a far-flung idea is Linda Reimer, Christy Clark's BC Liberal candidate for Port Moody-Coquitlam who also made headlines this election after stating she supports two-tier healthcare for wealthy patients.

Back in 2009, the BC Liberals, known to be close with their corporate donors, proposed studying a plan to give corporations the right to vote in BC's municipal elections. Reimer, at the time a local city councilor, publicly endorsed the idea – a change that would effectively allow business owners to cast two or more votes during elections while citizens who don't own a business would continue to get just one vote.

What was her logic behind endorsing this proposal? Here's the explanation Reimer offered:

"Business owners take tremendous personal risks, drive our economy, donate to non-profits and employ our citizens even during recessions."

Reimer most recently served as Parliamentary Secretary to the Minister of Community, Sport and Cultural Development for Communities – that's the minister in charge of making changes to BC's municipal elections and as recently as November 2013, Reimer was leading consultations that sought to gather "form letters promoting the corporate vote."

Reimer's endorsement of the bizarre proposal appears buried in a 2010 submission to a BC government's Task Force from the Canadian Federation of Independent Business, one of Canada's biggest business lobby groups that opposes raising the minimum wage and has been connected to anti-union astroturf groups.

In the submission that Reimer endorsed, CFIB argues that "businesses in BC have become increasingly disenfranchised" while "taxation and regulation" have become big "headaches," therefore "all corporations" ("including those from outside BC" if they pay any tax in the province) should be allowed to vote because it would "restore accountability." 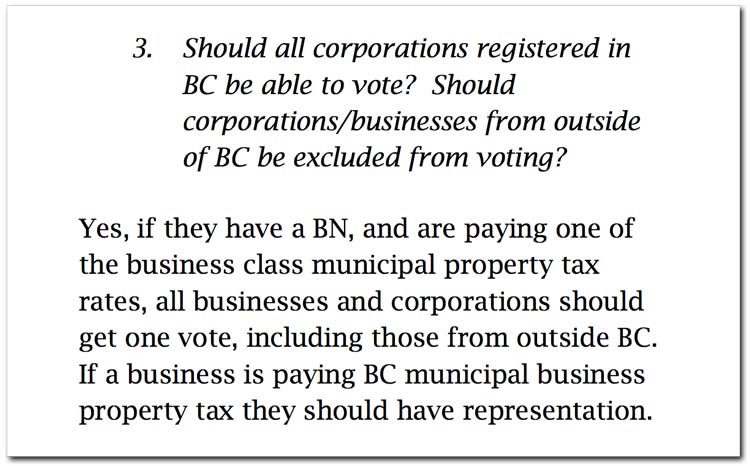 CFIB's submission goes on to explain that thanks to an obscure rule that was eliminated in 1993, businesses were actually allowed to "vote in municipal elections," although they concede "very few businesses" ever took advantage of it.

To avoid repeating this mistake and boost turnout from corporations, CFIB recommended making the process "as simple as possible to ensure that businesses have the maximum opportunity to participate in the electoral process."

As CFIB saw it, each corporation would designate a "proxy" who would "go directly to the business vote table at any municipal polling station, show identification and cast the proxy ballot like any other voter in the municipality." In most cases, the "proxy" would be the business owner.

Anticipating, that some will "find this idea offensive as they believe strongly in the idea of one vote per person," CFIB prepared responses in advance to possible objections, suggesting that "the business is really a person" so it doesn't matter if a business owner votes twice. They also pointed out that "blind people" and "those that cannot speak English well" often have proxies who cast votes on their behalf too. 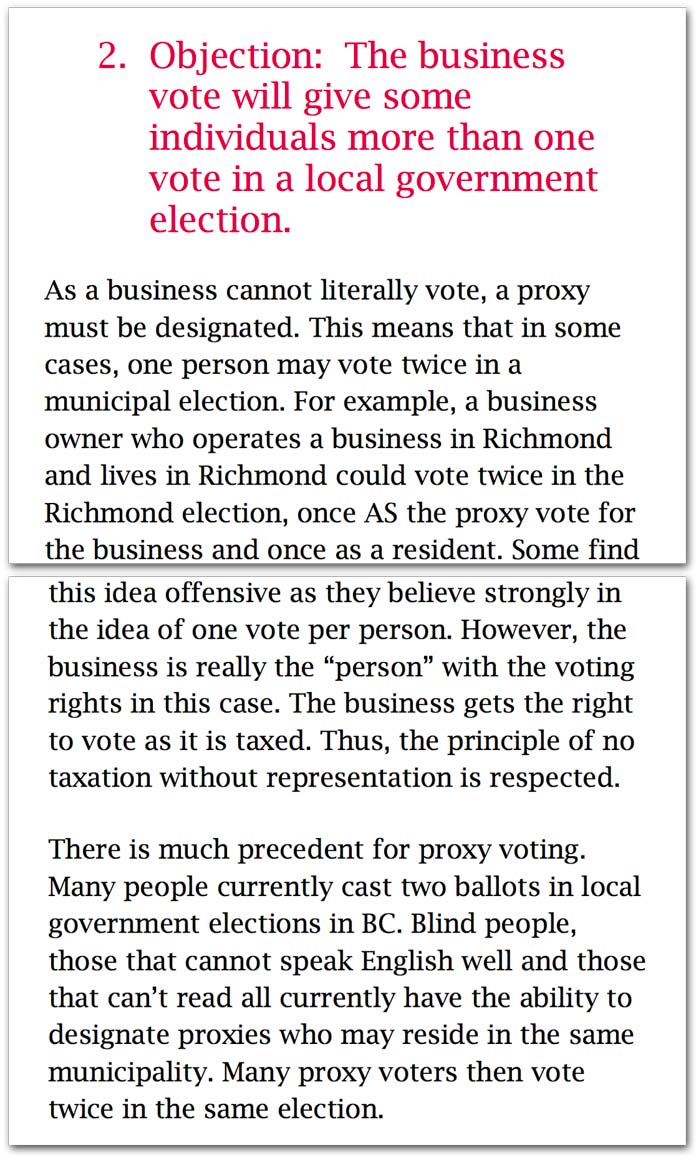 So, Reimer effectively endorsed giving business owners two or more votes in elections. What else?

While CFIB anticipated some would feel this would give corporations the power to "control municipal elections" and "negate the influence that residents have over municipal affairs," they noted that allowing 390,000 businesses to cast votes would only help them sway 13% of the overall vote – no biggie, right?

And although "some people have suggested that if businesses get a vote in municipal elections surely they would want a vote in provincial and federal elections too," CFIB says it would provide a "strong incentive to pay attention to their concerns." 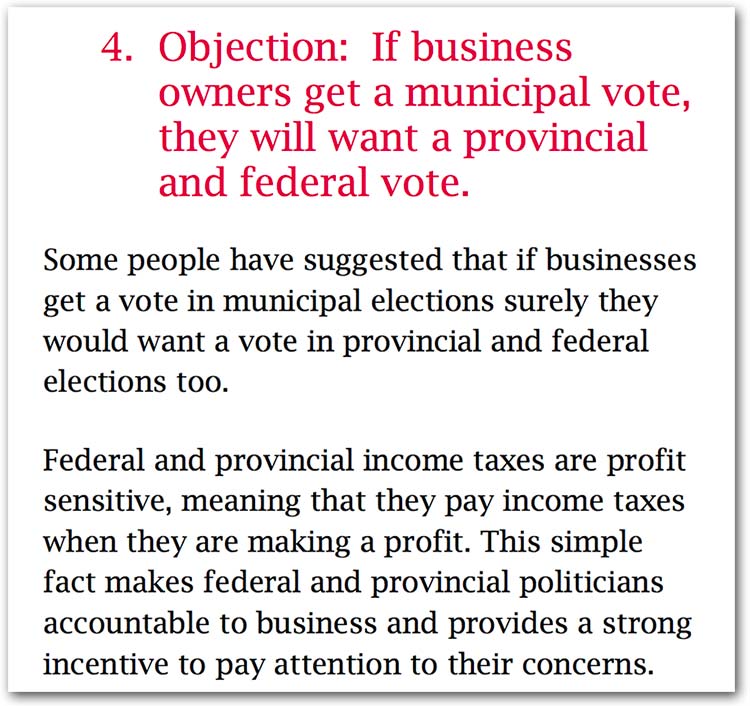 Corporate suffrage proved quite controversial, even as far back as the year 2010.

The BC Federation of Labour argued in its own submission that "one-person, one-vote is the cornerstone of a liberal democratic society."

Similarly, the Canadian Union of Public Employees strongly opposed "allowing non-humans to vote in elections," hanging much of their argument on the fact that "a corporation is not a human being."

Unfortunately for Reimer and CFIB, the BC Government Task Force released its final report in May 2010 and recommended BC "not establish a corporate vote."

The Task Force pointed out that "no corporate vote" exists anywhere in Canada and suggested there was "no approach" that would "ensure fairness among businesses, equity for electors and administrative workability."

In addition to making headlines after stating during an all-candidate's debate that she supports a two-tier healthcare system for "those who are able to afford it," Reimer was widely mocked after releasing a video in which she says she has "great tolerance" for "people whose lives aren't as good as mine":

Human beings in British Columbia will cast votes on Tuesday, May 9.