Someone cue a sad violin.

Reacting to new rules cracking down on the influence of big money in British Columbia politics, the opposition BC Liberals say a new rule capping annual political donations at $1,200 per person is a "big disappointment," complaining the new cap on donations will give the BC NDP an unfair advantage over the BC Liberals.

The BC Liberals recently proposed capping donations much higher at $5,000 per person instead – a proposal that would have actually seen British Columbia adopt the highest limit on political donations in Canada.

Under Christy Clark's BC Liberal government, the province's political financing laws were widely viewed as the loosest rules in Canada, creating a system that allowed the BC Liberals to collect well over $100 million dollars from corporations over the last decade.

One report found that 177 top BC Liberal donors who gave $55 million to the party received $15 billion in contracts, subsidies and other special favours from the BC Liberal Government over the last decade.

That probably helps shed light on why BC Liberal attorney general critic Andrew Wilkinson told reporters Monday he was so disappointed by the new limits on campaign donations:

"They've arbitrarily chosen a figure of $1,200 for the amount that is the cap for donations, and clearly that will suit their interests, there's no rationale for it other than it suits the interests of the NDP."

As opposed to suiting the interests of who? The BC Liberals?

In announcing the new rules, BC Premier John Horgan explained that his government is "reforming campaign finance rules to make sure government's actions and decisions benefit everyone, not just those with deep pockets."

The new rules will ban fundraising events in private residences if they're attended by a party leader, meaning the BC Liberals will no longer be able to throw $10,000 per plate fundraising dinners offering wealthy donors exclusive access to their leader. 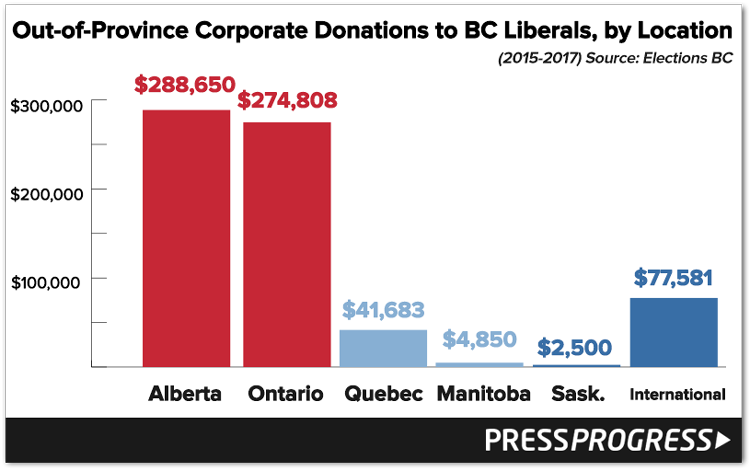 While Wilkinson might think all of this is terribly unfair to the BC Liberals, BC's new campaign finance rules actually bring the province into step with the rest of Canada in a number of important areas:

• Political parties will now be required to report fundraising events that will be published on Election BC's website, a move that's in line with similar rules recently introduced federally and in Ontario in response to public criticism over the growth of cash-for-access fundraisers.