Bernie Sanders: The Trans-Pacific Partnership is a "disastrous" deal for the middle-class

Remind us why Canada signed this again?

On the same day as Canada joined 11 other countries in signing the Trans-Pacific Partnership, Democratic presidential candidate Bernie Sanders slammed the massive trade deal, warning the TPP will throw workers "out on the street."

The TPP is a continuation of our disastrous trade policies that have devastated manufacturing cities and towns all over this country.

"I think it is a continuation of bad trade policies," Sanders said, adding that's "one of the reasons why the middle-class of this country and the working-class is struggling so hard."

Sanders has said that although "trade is a good thing ... trade has got to be fair," the TPP is a deal that will make it easier for corporations to outsource jobs overseas.

Sanders and his rival, Democratic presidential candidate Hillary Clinton, are both opposed to the TPP.

At that time, then-Liberal leader Justin Trudeau criticized Harper for not being "open and honest" about the deal, adding that "the Harper Conservatives have failed to be transparent through the entirety of the negotiations – especially in regards to what Canada is conceding in order to be accepted into this partnership."

This follows months of confusing signals about whether Canada will have a "full and open" debate on the merits of the TPP.

Freeland has pledged to hold consultations before the trade deal is ratified by Parliament, although now that the deal is signed, the minister has indicated it's now a take it or leave it "decision of yes or no" – even as Canada has moved to "scrub" a controversial provision allowing corporations to sue governments from a similar trade deal with Europe that Canada is locked into under the TPP.

Getting social licence for the TPP could be a tough sell at home – a new poll suggests less than one-third of Canadians support the trade deal, and as many as half are uncertain about what's included in the small print.

The government has not yet undertaken an economic impact study of the TPP, though Freeland says the government plans to study the deal's impact on the Canadian economy.

That would be a good idea.

One recent study from the Massachusetts-based Tufts University estimates Canada could face a net-loss of 58,000 jobs as a result of the TPP. 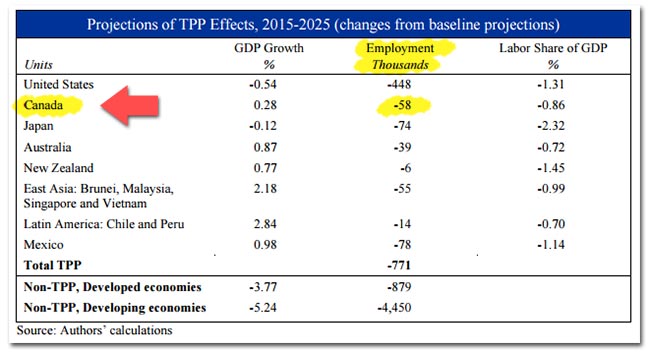 The study observes that the TPP will have "negative consequences for the economy," by shifting to "less labour-intensive" production for export and putting pressure on businesses to "become more competitive by cutting labour costs, thereby seeking higher short-term profits while undermining efficiency and productivity in the long-term."

Bernie Sanders: The Trans-Pacific Partnership is a "disastrous" deal for the middle-class

Chrystia Freeland: Canada will have a "full and open debate" after we formally sign the TPP

Will Canada actually have a "full and open" debate on the Trans-Pacific Partnership?

Alarm bells are ringing about the Trans-Pacific Partnership. Here are 6 reasons why