Will Canada's biggest oil and gas lobby group get to rewrite key clauses of the Species At Risk act to weaken recovery plans for endangered species?

In a recent letter to Environment Minister Leona Aglukkaq, released to PressProgress under access to information, the Canadian Association of Petroleum Producers (CAPP) spells out what it would like the government to do after engaging on the file with top Environment Canada bureaucrats and Aglukkaq's predecessor Peter Kent "for some time."

Guided, in part, with the goal to provide "more stable regulatory regime to enable responsible development of Canada's oil and gas resources and to enhance Canada's global competitiveness," CAPP is zeroing in on the recovery provisions in the act, according to the newly released letter, dated November 7, 2013.

Currently, if listing an animal is deemed to have social, economic or political impacts, it can be denied listing, even if science says the animal should be protected.

CAPP now wants to add social and economic considerations to the recovery strategy.

First, the group would like Section 43(2) of the act amended to scrap a process instructing the Minister to put together a recovery plan based on scientific evidence with a process that also takes "socio-economic implications" into account: 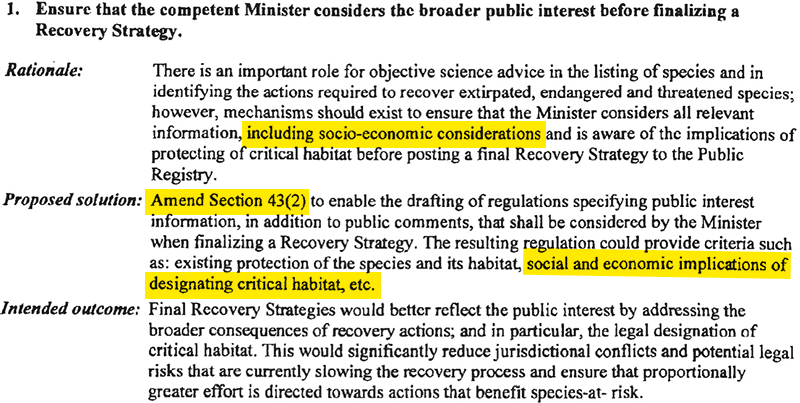 The second piece is to weaken the "critical habitat" provisions in Section 41 of the act.

Currently, when a species is listed, the act requires that the habitat crucial for its survival and recovery (called critical habitat) be identified in a Recovery Strategy. As the David Suzuki Foundation explains, "for most species, recovery is only possible if critical habitat is identified and protected, maintained or restored."

Already, the majority of Recovery Strategies do not identify and map critical habitat as required by Section 41, even though habitat loss and degradation are the primary causes of decline for 84% of species at risk in Canada. 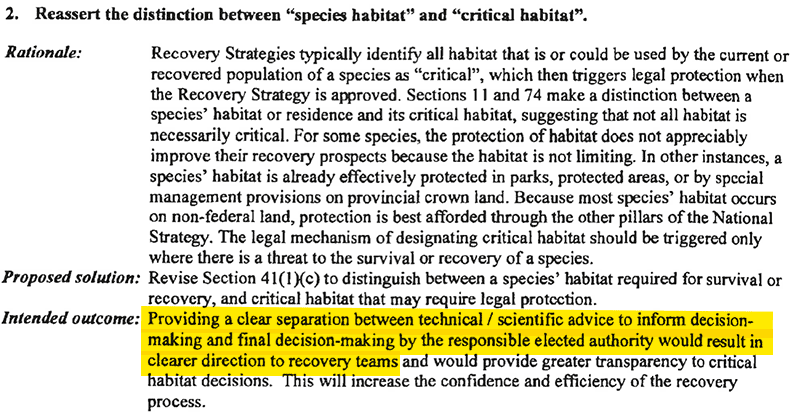 CAPP's interest in how governments manage species at risk doesn't come out of the blue.

Back in 2011, the Alberta government was considering whether to declare the woodland caribou (famously appears on the Canadian quarter) an endangered species (in rapid decline mostly due to habitat loss) -- recommended (based on science) by the province's endangered species conservation committee.

"The best available evidence suggests that the Alberta woodland caribou qualifies for endangered," the committee concluded.

The Canadian Press obtained documents showing CAPP "attacked" the work of the committee; it hired two consultant biologists who produced a long document questioning how the government scientists arrived at their population counts.
"The methodology is extremely well-documented in the literature and accepted by scientists. I'm not quite sure what the issue was," a scientist on the committee to CP, which also unearthed committee minutes after the affair. "What should we do when ideology is being cloaked as questions about science?," one scientist asked.

At the federal level, we've seen how CAPP can have an effect on government legislation.

A previously released document shows lobbyists from CAPP recommended the government’s 2012 strategy to put multiple changes to a series of environmental protection laws into a single piece of legislation. The government ran with the recommendation and buried changes to weaken environmental rules in their omnibus budget bill that year.

Will CAPP get its way again with these amendments to the Species at Risk Act?

Here's a copy of the letter to Aglukkaq