Feeling left behind by the economy?

You're not alone – the richest people in Canada have seen their incomes skyrocket over the last three decades while middle class wages stagnate.

Looking at data from the census, income tax records and household surveys on Canadian incomes between 1981 and 2016, Dalhousie University economics professor Lars Osberg finds a "very large difference between income growth in the middle and income growth among the top 1%."

Osberg notes Canada's economy grew considerably over the last three decades, with real GDP per capita increasing 55.9% since 1981 – that would work out to an increase of $20,000 per person.

But that wealth isn't trickling down to middle class families. As Osberg explains:

"The largest income changes have occurred at the top of Canada's income distribution".

Osberg points out that following the Second World War, "balanced growth meant that the rich, the middle class and the poor all shared in economic prosperity."

That golden era started to end in the 1980s when wages began to stagnate: 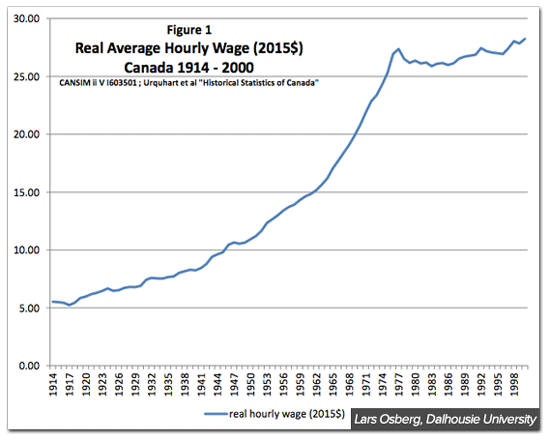 But as Osberg notes, this average doesn't fully capture what's really going on, particularly since "the surge in top 1% income share in Canada since the mid-1980s is unmistakeable."

Breaking the data down by each income group, here's how real hourly wages changed over three decades in 2015 dollars:

• The lowest 10% of Canadian income earners saw their real hourly wages drop by 2% since 1980, a decrease of 24 cents per hour.

• Canada's middle 50% saw hourly wages increase by 11%, an increase of less than $3 per hour for Canadians in the middle.

"Although Figure 1 gives the impression that average real wages recovered a bit towards the end of the 1990s, and although an increase in average wages can also be seen in the first column of Table 1, this increase in the average hourly real wage comes disproportionately from the very large increases in hourly wages of the very top end (99th percentile and P99.9th percentile)."

And although Osberg observes slight differences in gains for different income groups in the middle, overall, the full picture shows middle class wages stagnating while incomes at the top surge: 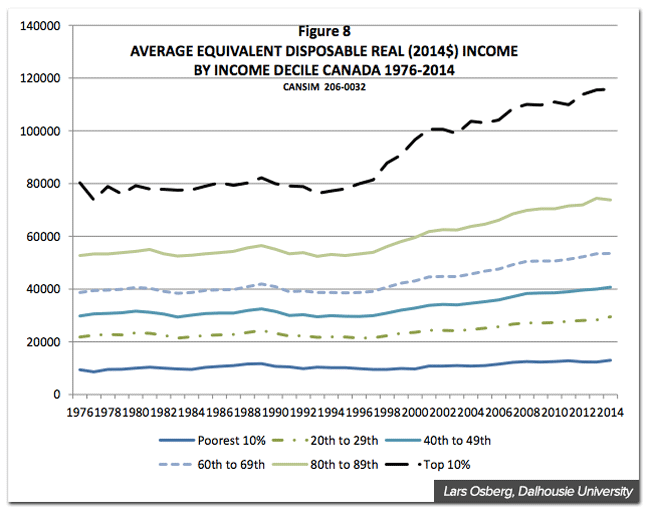 At the same time, growing inequality is also fueled by differences within the top 10% of earners too:

Osberg suggests "Canada's political and economic elites" need to recognize that the consensus on economic policy over "the last 35 years" needs to be rethought:

"The question is whether Canada's political and economic elites will recognize in time that something has to change or whether they will continue working within the same policy framework (inflation targeting, lower taxes, reduced transfers, more constraining trade agreements and more limited public sector involvement) that has been applied, fairly consistently, in Canada for the last 35 years."