Stephen Harper likes to portray himself as Canada's job-creator-in-chief.

But if you peel back the rhetoric and take a closer look at the labour market, Canada has been undergoing a quiet transformation in favour of part-time jobs.

"This type of unsteady or precarious work is a quieter or less visible trend in Canada's labour market, where muted job creation tends to grab most of the attention," writes Tavia Grant in the Globe and Mail.

"The shift to a just-in-time labour market creates a host of difficulties for long-term planning, eligibility for jobless benefits, and often results in a diminished ability to save. Erratic hours create challenges in pursuing an education, arranging child care and qualifying for a mortgage."

In fact, 75% of Canada's net new jobs created in the last year have been temporary, with nearly 60,000 temporary or contract positions added to Canada's stagnant economy.

Here are three graphs that show the scope of Canada's part-time job problem:

More people are working part-time jobs now than they were 10 years ago.

And not all of them want to be working part-time jobs.

A little over a quarter of all workers want to be working full-time, but have to take the jobs to make ends meet.

Meanwhile, term and contract jobs are on the rise.

Who needs stable, dependable work when you can go from contract to contract? 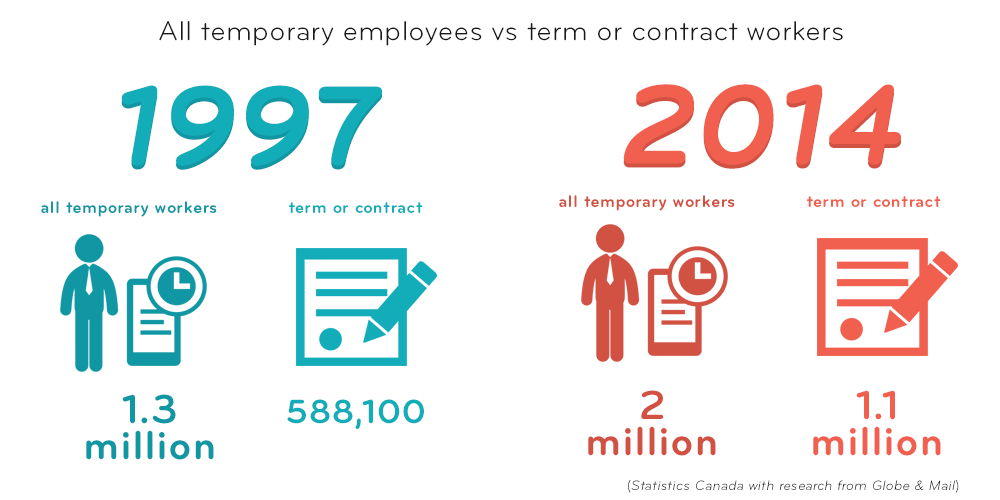 economy What the fact? jobs

Don't worry, Canada: Here are the 111 most embarrassing Conservative candidates this election