What will it take to get a little fact-checking around here?

And once again, Canadian media outlets seem like they can't be bothered to give this report critical coverage, even though the think tank openly admits its research is designed to push a "communications agenda."

"What you make today you're making for yourself, as opposed to the $43,000 which is the calculated tax bill for an average Canadian household that earns just over $100,000. So that's your income taxes, retail sales taxes, sin taxes, health care taxes and fuel taxes, among other things."

A few problems with that:

How do we know this? Because the Fraser Institute's own report has a footnote that tells us "the average family income displayed throughout the report is not the true average of all families in a particular jurisdiction." Statistics Canada, on the other hand, says the median Canadian family earned $76,550 in 2013.

2. "Among other things" is an interesting way of putting it – guess what else the Fraser Institute includes on the "tax bill" of an "average Canadian household"? Corporate taxes and oil and gas royalties.

So based on what they say Canadians pay in income tax, "Tax Freedom Day" would fall on February 9th, not June 7th.

This creates a distorted impression of what actually appears on the "tax bill" of "the average Canadian family." As former Walrus editor John McFarlane previously noted:

"Critics of the Fraser Institute report have also pointed to a bias in its definition of taxes, in terms of what it included in its calculation of the average tax bill. Are royalties on oil and gas revenues taxes? Are import duties taxes? Are taxes on goods and services, property, vehicles, fuel, alcohol, and tobacco — so-called consumption taxes — as burdensome as those applied to income? Is it reasonable to include corporate taxes in the total that Canadian families pay?"

Yet the reports coming from a number of Canadian media outlets aren't very critical:

Today is Tax Freedom Day. Fraser Institute says June 7th is the day you start working for yourself and not the government.

If that sounds like it could have been copy-pasted straight out of a Fraser Institute press release, you might be on to something:

On the other hand, other Canadian media outlets prefer to literally screengrab the Fraser Institute's tweets and tweet them out under their own Twitter handles:

Today = #TaxFreedomDay @FraserInstitute says up until today every pay cheque you've earned has gone to gov. in taxes pic.twitter.com/PxpypYloll

One Montreal-area radio station even included the Fraser Institute's promotional video and a direct link to the report: 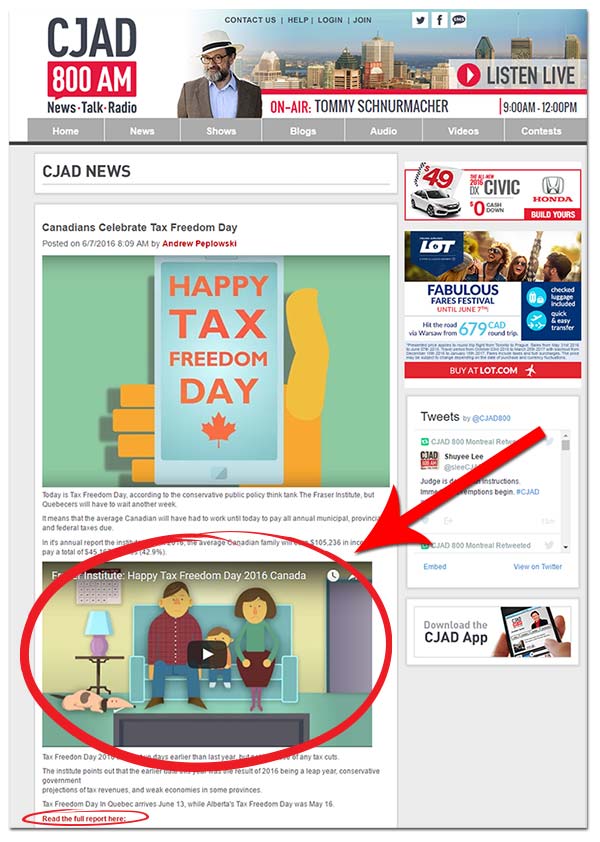 In 2014, the Montreal Gazette retracted a story about another Fraser Institute tax study after the paper was criticized for copy-pasting a press release riddled with factual errors.

"The article about the Fraser Institute's tax study has been removed because it did not meet The Gazette’s editorial standards," an editor's note read. "We apologize to readers for this lapse."

So what's it going to take to get a little fact-checking around here, hmm?