After decades of increasing participation in the Canadian workforce, a record number of women dropped out in 2014, according to Statistics Canada data compiled by CUPE economist Toby Sanger.

Over 80,000 women dropped out of the workforce last year alone, 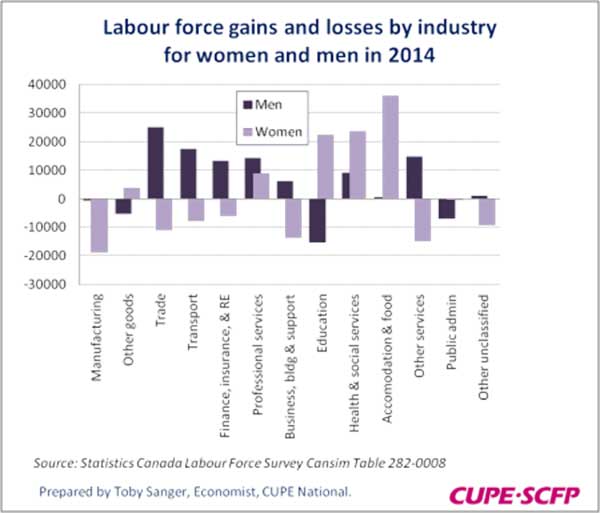 Sanger adds that, "the unemployment rate for women ... would have risen from 6.4 to 7.3 per cent" last year had women's participation rates not declined -- "this would have been the highest annual rate in 15 years and even higher than it was during the 2009-10 recession years."

This is strange, Sanger points out, as previous declines coincided with recessions but, "the decline last year comes five years after the recession was supposedly over." The previous one-year dropout record for women was 67,000 in 1992.

So what caused the decline?

It's not retirement and it's not fertility -- the biggest declines in workforce participation were middle-aged women aged 40-54, and declines were recorded in every province across Canada.

Sanger goes on to explain:

"Occupations with the greatest decline in female employment were clerical (-36,000); trades, transport, equipment operators and construction (-14,000); professional occupations in health such as nurses (-16,000); and middle management (13,000). Most of these aren’t higher paid occupations with early retirement benefits.

Although women saw gains in some industries (with the biggest gains in "accomodation and food"), those gains were outpaced by declines in "heavily male-dominated industries":

So what's the solution? Sanger makes the following points:

5 Things You Don't Know About Minimum Wage Workers in Canada