Canadian workers are more productive than ever. So why aren't wages rising too?

No wonder people are angry.

A new study concludes workers are more productive than ever but those gains aren't showing up on their paycheques – and that's "hollowing out" the middle class.

The study, published by the Canadian Centre for the Study of Living Standards, finds "there is a pervasive sense among Canadians that the living standards of the 'middle class' have been stagnating."

And this "prevailing sense of middle class malaise" is likely explained by the "disconnect between labour productivity and stagnant earnings."

But during the same period, wages didn't keep pace: 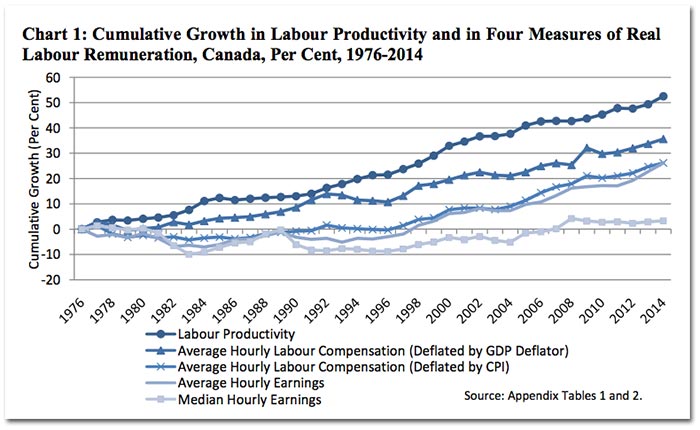 The study notes that "inequality has risen considerably in Canada in recent decades, particularly in the 1990s":

"Average earnings began to pull away from median earnings in the late 1980s, and earnings inequality grew quickly throughout the 1990s. Inequality stabilized in the early 2000s, but appears to have begun another steep increase after 2010."

Overall, between 1976 and 2014, average hourly earnings grew only 3.3% when adjusted for rising costs of living. 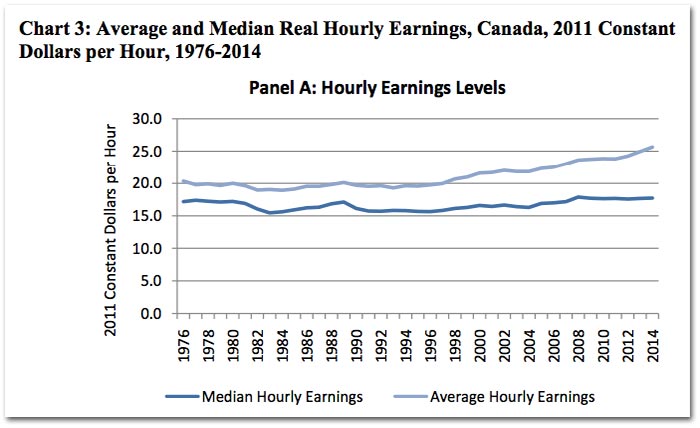 At the same time, wealthy Canadians have kept more of the profits for themselves.

However, the study argues this is less a story of the "super-rich pulling away from everyone else," but instead story about the "hollowing out of the middle."

Although the authors see globalization and technological change as part of the problem, they emphasize that the single biggest cause of this inequality is stagnant wages – middle class Canadians haven't gotten a raise. 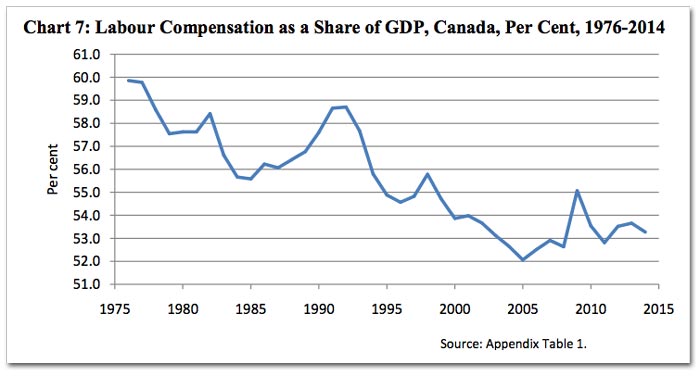 The authors stress that economic inequality is not inevitable – it's a political choice.

"Canadians are unhappy with the way in which income growth has been distributed in recent decades," the author's observe. "Policy can be used to adjust that distribution."

And they have warnings about the future:

"The forces that are likely causing the stagnation of middle-class earnings are unlikely to disappear in the near future. If anything, the possibilities for further substitution of capital for labour are likely to expand with the advent of self-driving vehicles, self-service technology in retail, automated fast food preparation, and so on. At some point, policymakers will have to grapple with the implications of these changes for the living standards of the middle class."

In other words, if the underlying causes of rising inequality are left unchecked, things will likely get much worse.

Canadian workers are more productive than ever. So why aren't wages rising too?

Congratulations, Canada: now the world is talking about your Prime Minister's "racist" rhetoric