After a week of non-stop gaffes, including one candidate who said his call to shut down hospitals was just a publicity stunt, the Manitoba Liberals accidentally e-mailed virtually every journalist in the province, pleading with candidates not to say anything negative about the party's besieged leader, Rana Bokhari:

#mb16 An email sent to all media, apparently in error, apparently from the Liberal Party media account. pic.twitter.com/6vnstI0df2

That's pretty bad, but it could be worse.

Just ask the Progressive Conservatives' gaffe-a-minute leader Brian Pallister, who might as well be the very definition of a gaffe: 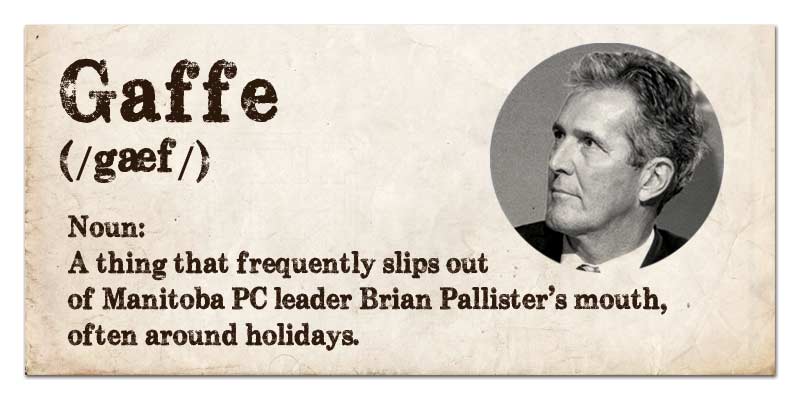 After all, this is the man who once stated Joe Clark's Progressive Conservatives were like a "whiny, bitchy Dalton Camp with PMS."

And this is the man who dodged a reporter's question by blurting out he was giving "a woman's answer," something he clarified is an answer that is "fickle."

Pallister was, of course, slammed for being "disrespectful" and "derogatory" towards women.

And then there are the gaffes that fumble out of Pallister's mouth when he gets into the holiday spirit.

In 2013, the Manitoba Tory leader wished "all you infidel atheists out there" a Merry Christmas, although he confessed "I don't know what you celebrate during the holiday season."

"I, myself, celebrate the birth of Christ, but it's your choice," Pallister thankfully clarified.

And then in 2014, Pallister informed the Manitoba Legislature that he hates Halloween.

"I hate Halloween," Pallister remarked. "I always have."

"I don't like the deceit of it," Pallister elaborated, adding that trick-or-treating isn't "good for the integrity of the kids."

And when he was a Canadian Alliance MP, Pallister recited a raunchy poem back in 2004 in the House of Commons.

Although he was attempting to make some kind of point about the Liberal government's immigration scandal, Pallister suggested foreign doctors and nurses could "improve your chances by stripping first" or another line about how "your chances expand if you do the full monty" has some pretty cringe-inducing subtext.

"Don't let them touch you, or else you'll get fined," Pallister added. "It's the Liberal bump and grind."