A new report on child poverty in Canada -- released Monday by Campaign 2000 on the 25th anniversary of the unanimous passage of former NDP leader Ed Broadbent's motion to end child poverty by the year 2000 -- has actually increased since 1989.

That works out to about one in five children, or over 1.3 million kids in the country, according to Campaign 2000's new report: 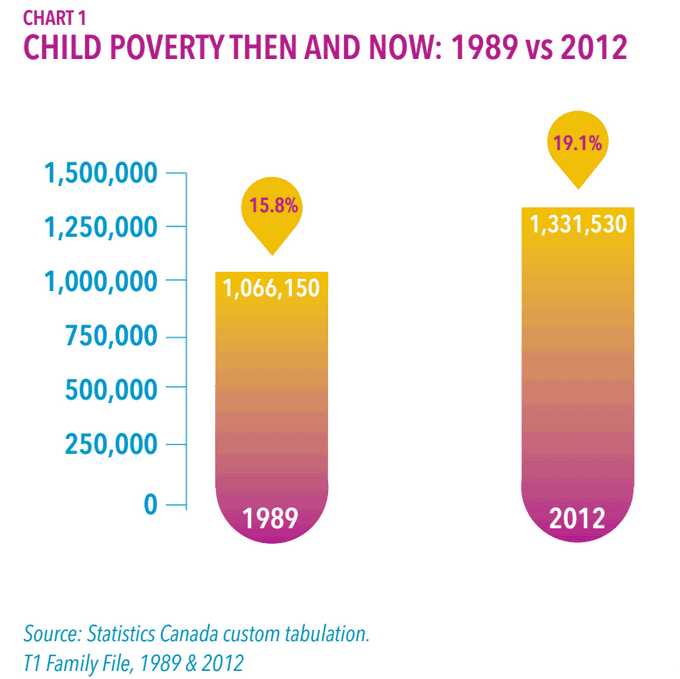 Broken down by province, seven out of 10 provinces saw the rate of child poverty increase, including in Ontario. There are now half a million children who live in poverty in Canada's largest province -- or 19.9% of kids, up from 12.4% in 1989:

"Overall, most recent figures show that more than 1 in 3 low-income children had at least one parent working full-time during the year but were still in poverty." In Ontario, "about 40% of children living in poverty reside in a household with a parent with full-time, full-year employment."

Meanwhile, "precarious employment makes it harder to raise children. As many of these jobs are part-time and low-wage, parents may have to work multiple jobs at one time. The nature of this type of work makes it difficult for workers to schedule child care for their children, budget for household expenses, and spend time with family."

Employment data shows that, "the number of Canadians in temporary jobs grew at more than triple the pace of permanent employment," and the only age group to see net-growth in full-time jobs were those 55 years and older. In fact, between August 2013 and August 2014, those between the ages of 25-54 (the age group most likely to be raising children) lost about 30,000 full-time jobs and added 25,800 part-time jobs, something that has become the "new normal." 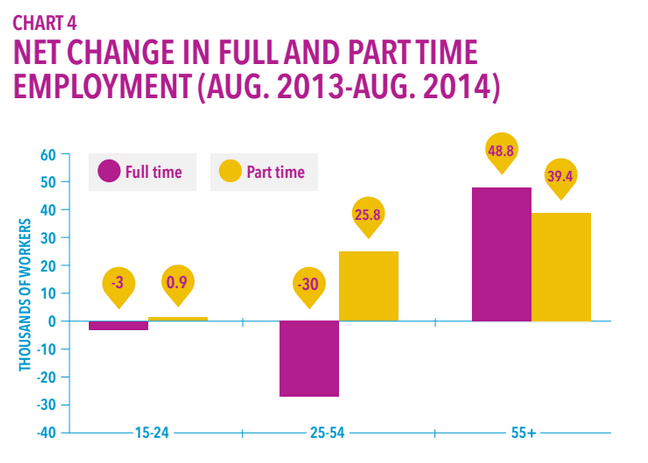 Which brings us to child care.

Campaign 2000 notes that "sky-high fees" and lack of available spaces have led to a situation where child care is not "financially accessible" for low and even most middle-income parents.

"The lack of affordable child care presents a major barrier to parents seeking to escape from poverty," said Campaign 2000 National Coordinator Laurel Rothman in a recent blog post. She noted that the "seven countries with the lowest child poverty rates (less than 7%) in the OECD have almost all developed robust systems of early childhood education and care services."