Of course they did!

As Elections BC launches an investigation into reports that lobbyists are illegally funneling money from corporate interests to the BC Liberals, a new report from the Canadian Centre for Policy Alternatives shows some of Clark's big money donors also happen to be among the most frequent to lobby her government and shape policy.

Mapping the influence of oil and gas money in BC politics, the CCPA suggests big money is undermining the "public interest" – as well as efforts to "fight climate change":

"A remarkable and disturbingly close relationship between industry and the provincial government—one that not only contradicts the province’s stated aim to fight climate change but also undermines democracy and the public interest."

No surprise there: this is the same premier who tapped a former Fraser Institute wonk who is skeptical of climate science to implement BC's climate change plan – a plan so bad the experts who designed the plan slammed it as "pathetic and cowardly."

But when it comes to political contributions, the CCPA shows the oil and gas industry is lined up behind Clark's Liberals.

Nearly half (48%) of all BC Liberal donations from the oil and gas industry came from just two companies: Teck Resources and Encana. 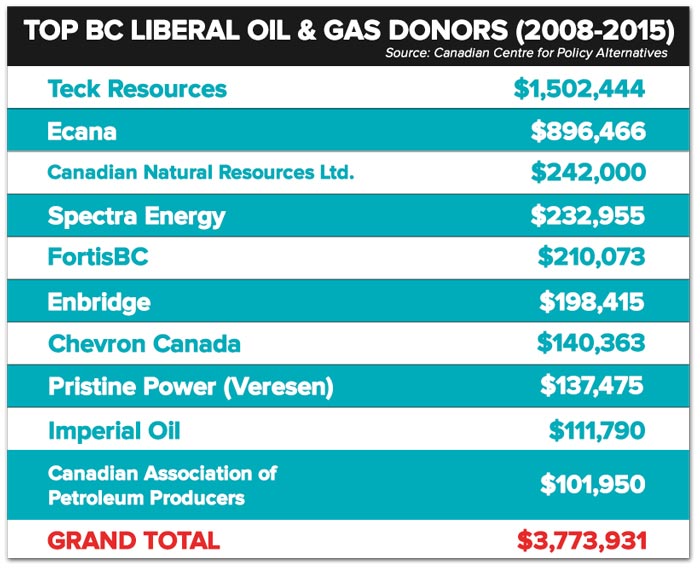 The impact of these donations can take a number of forms.

The CCPA notes that donations are a way of "purchasing access," since "donations help secure access to key decision-makers and offer the opportunity to exercise political influence."

So it shouldn't be surprising to learn that many of those same donors also happen to have had thousands and thousands of meetings with cabinet ministers and other public officials in the BC government over the last several years.

The CCPA also points out that between 2010 and 2016, the BC government has averaged 14 lobbying contacts each business day, with just ten oil and gas companies contacting BC cabinet ministers over five thousand times, and nearly ten thousand contacts with officials at BC government ministries and agencies too. 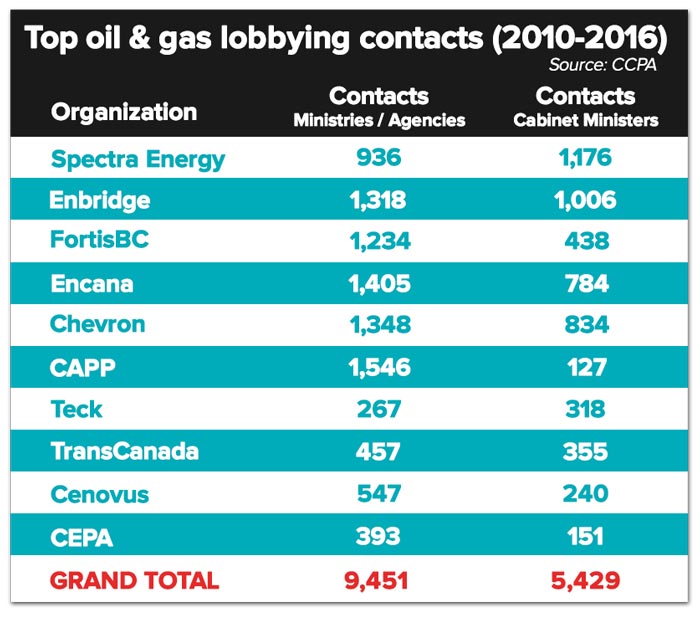 And thanks to weak disclosure rules, only meetings initiated by the lobbyists themselves have to be disclosed, meaning the real number of contacts is likely larger than what's captured by public numbers.

Still, that's a lot of coffees with Christy Clark and her cabinet ministers:

According to the CCPA, 28% of all lobbying activities in BC target Clark's cabinet ministers.

What happens during those meetings? The report explains that it provides "a level of contact that provides companies an unrivaled opportunity to shape policy outcomes." 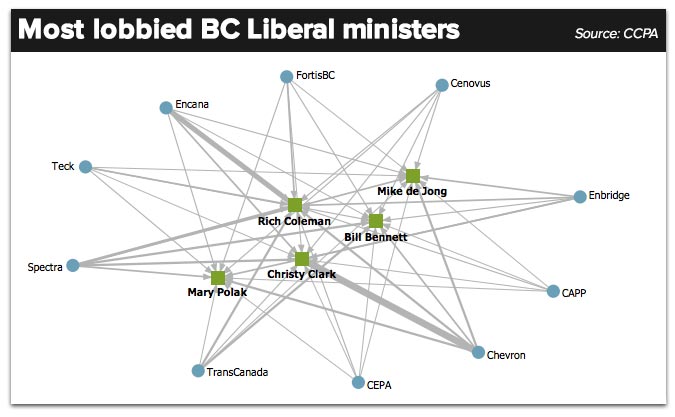 According to data from the Office of the Registrar of Lobbyists for BC, here are a few topics from past meetings:

• The Canadian Association of Petroleum Producers, who gave Clark's Liberals more than $100,000, met with the BC government to "review greenhouse gas policy" and "promote proposals related to the Climate Leadership Plan."

In total, "CAPP reported 201 expected lobbying contacts with government ministers and agencies in relation to development of the provincial government’s Climate Leadership Plan."

• The Canadian Energy Pipeline Association, a lobby group that works to "advance the interests" of its industry, met with Clark's government to "discuss Aboriginal relations issues."

• Encana, one of the biggest donors to Clark's Liberals, wanted to "propose a competitive and practical fiscal framework for resource development, including those related to corporate income tax."

"What shines through these numbers is the extent to which well-funded and well-organized corporations (and their industry associations) exert continual pressure on, or work in tandem with, key decision-makers to develop policies that align with their interests ... Given the tight coupling between public policy in British Columbia and the interests of extractive corporations, these lobbying efforts appear to be highly successful."

Sounds like business as usual under BC Premier Christy Clark.