Looking for an MP who shares Facebook posts on the characters of drunk women, signs of latent homosexuality and what "being a man" is all about?

The Conservative Party of Canada could have just the candidate for you.

It turns out Conservative candidate Konstantin Toubis, running in the Toronto-area riding of King-Vaughan, is prolific in sharing Russian listicles over Facebook on these very topics – and all since deciding to run for office.

Toubis told PressProgress he does not share the opinions of any of the material he shared on Facebook, but "re-posted" it in order "to show people how bad it is."

"It's information for people to read just like a newspaper article," Toubis added. "It doesn't mean you support this."

Here's a translated countdown of 4 Russian listicles that Toubis has shared on issues relating to sex and gender.

1. Alcohol and the character of a woman

"Did you know that you can tell a lot about a woman from the kind of alcohol she prefers?" asks a listicle titled "alcohol and the character of a woman" that profiles the characters of women and always seems to end with them blacking out, for some reason: 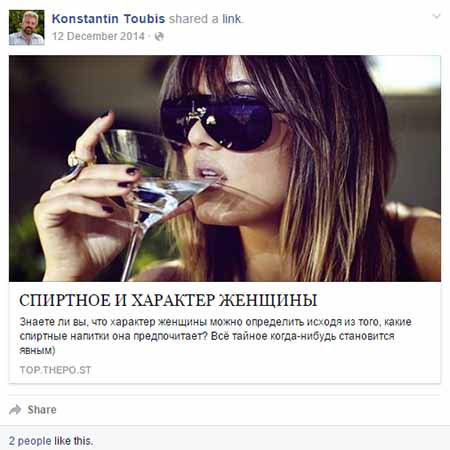 Here are a few points from the listicle Toubis shared:

2. The Rules of Attraction

And Toubis also shared this listicle about the "rules of attraction": 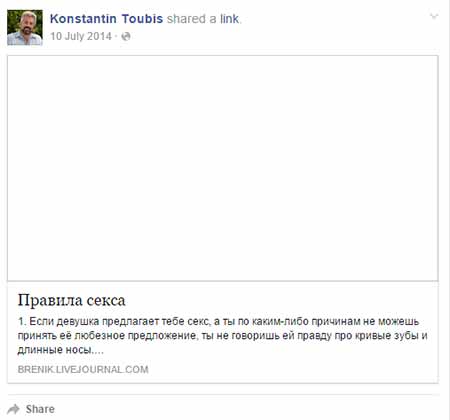 Here are some translated points from this listicle:

This listicle is about how "being a man is hard": 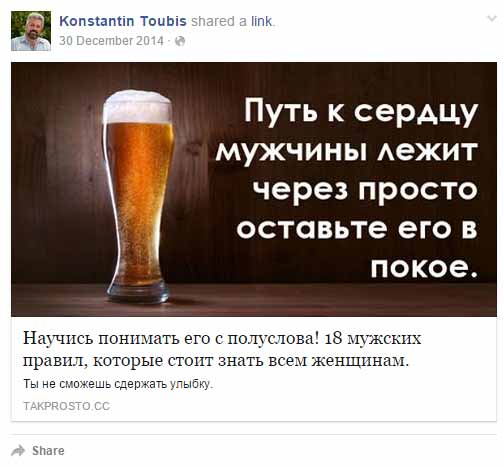 Here is some of the advice contained in this listicle:

4. Signs of a mentally healthy man? Not "a latent homosexual," apparently.

Another listicle Toubis shared in March covered the areas of mental health and sexual orientation, entitled "Seven signs of a mentally healthy man."

The blog adds, "this is also a sign of a latent homosexual."