WATCH: Conservative candidate yells at everybody during all-candidates meeting

Conservative candidate Deepak Obhrai completely lost his cool at an all candidates event this week.

Billed as a "conversation with local candidates," the Conservatives' choice for Calgary - Forest Park became agitated, interrupted candidates and yelled at constituents questioning his party's record on immigration, missing and murdered indigenous women and more.

One YouTube user who posted video described the scene as Obhrai's "angry outburst at constituents".

Another video posted by a different YouTube user shows Obhrai interrupting another candidate, accusing him of "lying" about the Conservatives' record on Omar Khadr.

Obhrai says Khadr's "Canadian citizenship was fully respected, that's why he was allowed [back] in the country," adding "we took him right away."

Other videos show Obhrai dodging questions on topics such as missing and murdered indigenous women, telling constituents that the Conservatives want to "find a solution, not to go back and find out what happened. We all know what happened."

In an e-mail statement to PressProgress, Obhrai said the debate became "heated" because he "was denied the right to challenge false accusations."

Obhrai appeared at the debate wearing a biker jacket with his name embroidered on the front pocket along with a black scooter helmet visible on the table in front of him.

Here is a photo of Obhrai wearing the same outfit at an event with Stephen Harper earlier in the campaign. 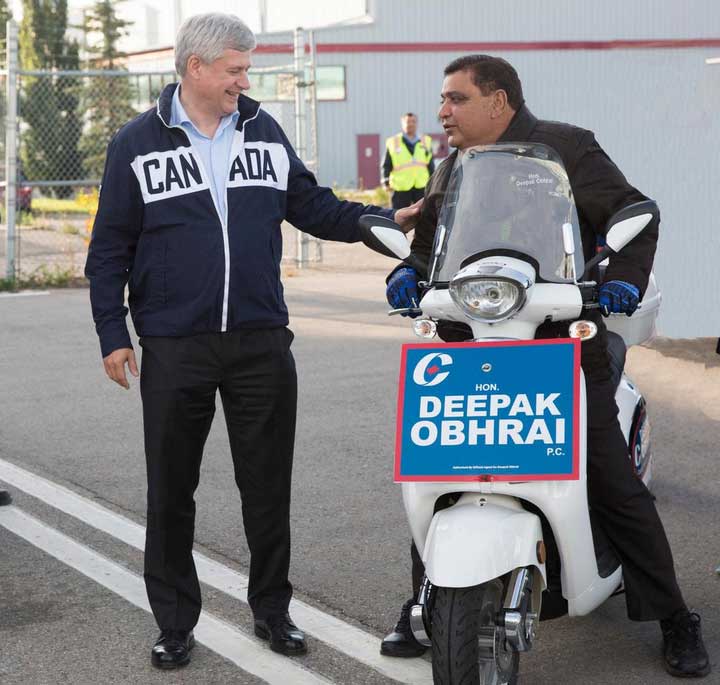 Yep, last weekend's Conservative Party convention was even more bonkers than you think