Sounds like it's time to go back to the drawing board.

A new report released by the Metcalf Foundation says Canada's Temporary Foreign Worker Program (TFWP) is leaving low-wage migrant workers in an even more precarious situation than they found themselves before the former Conservative government announced changes in 2014.

Two years after former Employment Minister Jason Kenney overhauled the TFWP, what's been left behind is "an uneven patchwork of regulation" and a system that "imposes conditions of deep insecurity that leave migrant workers vulnerable to widespread exploitation."

With the controversial program now under review, the report calls for reforms "anchored in human rights and labour rights" and include a "firm commitment to worker protection."

The report maps out six key areas in the labour migration cycle where the Conservatives' 2014 reforms have left migrant workers in a precarious situation: 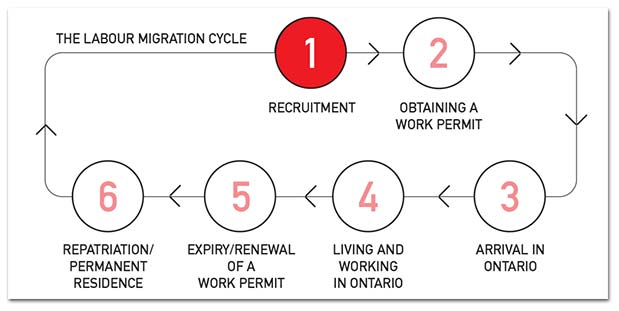 Migrant workers connect with temporary jobs in Canada through third-party recruitment agencies in their home countries.

Only problem is those agencies often demand outrageous fees "equivalent to two years' wages or more" and "subject to extortionate compounding interest rates." They're also known to engage in "surveillance, extortion, threats and intimidation" aimed at workers, their families as well as their communities.

The report argues the Conservatives government's 2014 TFWP changes enabled these kinds of practices by weakening language covering employers' responsibilities when it comes to third-party recruitment, as well as shifting responsibility to provinces to "establish and enforce laws on recruitment."

In addition to restricting migrant workers to one specific Canadian employer, the Conservatives' TFWP changes also reduced the length of permits to one year, increased application fees and placed caps on the number of migrant workers in workplaces.

Two problems with these changes, the report explains, is the short-term permits "significantly deepen migrant workers’ insecurity" while the added job insecurity obstructs efforts to "enforce rights in their workplaces."

Although migrant workers are now provided with a "brief" information package outlining their rights, the report points out workers aren't connected with worker groups, labour advocates or community organizations that could "assist and support them," particularly when it comes to "abusive recruiters."

"Access to this information," the report says, would help with "workers knowing their rights, developing links in the community that facilitate their social inclusion and social security, exercising their right to voice, and enforcing their rights."

The 2014 revisions also didn't do much to help "enforce their workplace rights."

Migrant workers also "remain overwhelmingly non-unionized," with caregivers who work in their employers' homes and agricultural workers in Ontario legally disallowed from unionizing.

Another problem with the Conservative government's 2014 decision to reduce work permits to one-year terms is that it increasingly makes migrant workers dependent on staying in the good graces of their employers.

"To ensure that an employer puts a workers' name forward to renewal," the report points out, "the worker is under considerable pressure to comply with any demands made by the employer ... and to put up with any treatment, even when it erodes rights that exist under a contract or applicable laws."

"In essence, the worker remains in a state of perpetual instability trying to retain their existing job."

A majority of Canadians say they'd like to see migrant workers offered a pathway to staying in Canada permanently.

But due to changes by the Conservative government in 2011, migrant workers are limited to work in Canada for only four years at a time, a rule change that  saw "thousands" of migrant workers forced out of the country after "working full-time, full-year for nearly a decade" making "long-term contributions to the economy and their communities" because they "had no opportunity to apply for permanent residence in Canada."

Along with the 2014 change limiting work permits to one-year terms, this uncertainty and insecurity has "created a dynamic fast-revolving door" that discourages workers from standing up for their rights because "migrant workers can be cycled in and out of the country even faster than before."

Kellie Leitch is promoting this book on her website. The author says Leitch's ideas are 'crazy'