Are Canadian Conservatives trying to harness the same dark forces as Donald Trump?

Not to be outdone, Conservative MP Cheryl Gallant is stirring some paranoia too.

In a blog post quietly published on the Renfrew-Nipissing-Pembroke MP's website over the summer, Gallant takes aim at "political correctness," which she claims is responsible for "hideous crimes":

"Are liberal supporters using the language of diversity and human rights to push an un-Canadian agenda that may include endangering the lives of our most vulnerable citizens, our children?"

Gallant complains that "Canadian values" have been "abandoned" and says a "fear of being called a racist" is now "preventing the identification of perpetrators of hideous crimes" – sounding alarm bells about "immigrants grooming adolescent girls for sexual exploitation" as well as the "harvest of body parts."

She also predicts Canada could be heading towards an anti-immigrant "backlash" similar to the "Brexit" campaign:

"The BREXIT 'leave' vote was as much a backlash by average Britons over what they saw as unacceptable changes occurring in their society as it was a referendum on trade.

It is naïve to believe what is happening in Great Britain and Europe cannot happen in Canada."

And Gallant's doing what she can to get that ball rolling too.

In the last month, Gallant has shared several articles from "Jihad Watch" – that's a website run by blogger Robert Spencer, who the Southern Poverty Law Center describes as an "American anti-Muslim pundit and hate group leader."

When Spencer appeared in Calgary earlier this year, CBC news reported his event was condemned by a "multi-faith coalition representing Christians, Jews and Muslims," with critics calling the blogger a "very dangerous person" who "incites hate."

This week, Gallant shared one article from Spencer accusing US Secretary of State John Kerry of a conspiracy to "keep people ignorant and complacent" about America's "suicidal approach" to "the Muslim migrant influx."

Another article shared by Gallant insinuates the Royal Canadian Mounted Police and Canadian media outlets are conspiring to suppress the truth about a small plane crash near Peterborough, Ontario last month.

An RCMP investigation determined there was "no national security aspect" to the crash and the article provides zero evidence to support its claims that the RCMP deliberately misled the public beyond off-handed speculation and innuendo.

Nonetheless, Gallant reacted by writing that it was a "cover-up at the highest level." 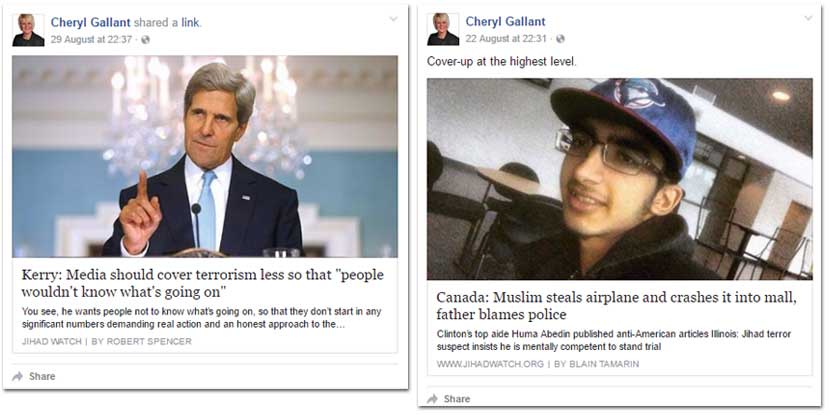 In only the last 12 months, Gallant has managed to make headlines:

• Getting herself ejected from a Renfrew nursing home.

Cheryl Gallant is Vice-Chair of the House of Commons' Standing Committee on National Defence.