On Sunday, Calgary Conservative MP Joan Crockatt tweeted some listener feedback to CBC's The Sunday Edition, expressing her opinion that this week's demise of the Sun TV channel was "the most important death in journalism this week" -- apparently even ranking above three prominent journalists who died during the last week: 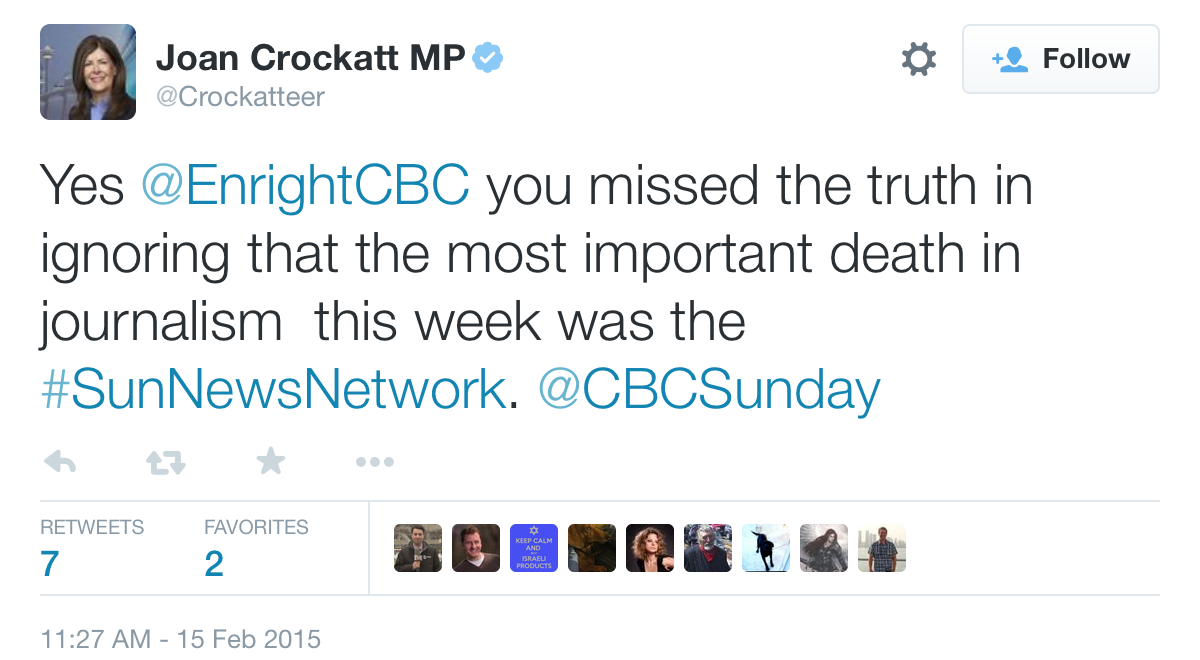 Crockatt was responding to host Michael Enright's February 15 CBC Sunday Edition essay titled "reflections on a bad week for the craft of journalism":

Enright also mentions the ongoing controversy over NBC's Brian Williams, Jon Stewart's announcement that he's leaving The Daily Show and the death of Sun TV. As Enright himself says in his essay:

"We are all privileged to be able to still do what we do as the competing media change, as newspapers implode, as  jobs disappear -- 200 this week at the death of Sun News Network -- and as the working rules of journalism become more opaque."

Not to mention, CBC Radio's As It Happens dedicated an entire segment on the shut down of Sun TV, featuring lengthy interviews with former Sun hosts David Akin and Ezra Levant.

"The most important death" #cdnpoli https://t.co/dY2VmT9b6h

Hey, remember how conservatives are supposed to own moral clarity on bad things like death n' stuff? https://t.co/4cmlRrQOFt ht @theturner

While sad people lost their jobs, by no means can the closing of a business ever compare to the deaths of people. @Crockatteer @EnrightCBC

@lgarvin62 @EnrightCBC @CBCSunday You may disagree with its politics but not that it's space in Canadian journalism is gone - with 200 jobs.

Okay, then... thanks for the viewer feedback, Crockatt.

Kevin O'Leary's little secret: I never wear pants on TV because the CBC is 'run by women'