If you put your child in a day care program, you're handing your kid over to the government to raise.

Canada's working mothers may find this surprising, but that's what the Conservatives have actually come up with to attack a $15-a-day child care plan.

After the New Democrats unveiled the plan this week, the Conservative Party put up a new attack website mimicking the NDP's site, equating building a national child care program to taking children away from families and "raising your kids for you."

The Conservatives didn't stop there. Over on their Facebook page, they called the plan "a crazy scheme to raise your kids for you."

The attack on working parents harkens back to flippant comments made by Conservative cabinet minister Diane Finley in 2011, when she was serving as Human Resources Minister. She criticized a child care program on the grounds that "parents are forced to have other people raise their children. We do not believe in that."

These loaded statements show how little the Conservatives understand women and Canada's workforce. And here's the government's own data, published in a report on early childhood development and care, to show how out of touch they are: 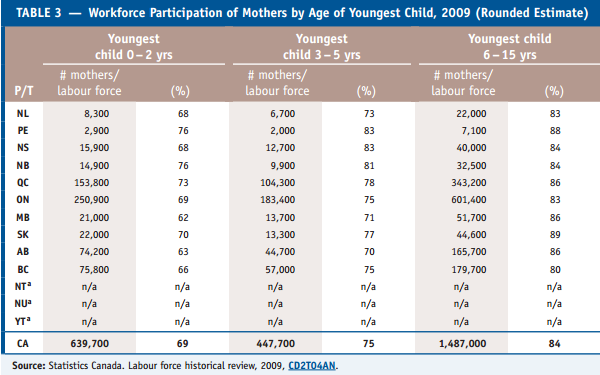 Given it's a pretty good chance many of these women are sending their kids off to a day care program every day, are the Conservatives really saying all these working moms aren't raising their own kids?

Photo: pinksherbet. Used under a Creative Commons BY-2.0 licence.