Conservatives vow to "stand up" for door-to-door mail delivery, except they axed that in 2013

Are Conservatives stealing ideas from the NDP or did they forget the last decade ever happened?

A fundraising e-mail sent to supporters Friday criticizes the Trudeau Liberals for breaking a campaign promise to restore door-to-door mail delivery and boldly suggests the Conservatives will "stand up" for "door-to-door delivery for all Canadians."

"Trudeau’s Liberals promised door-to-door mail delivery for all Canadians," reads the e-mail, noting "they even promised a review of Canada Post to make sure that it 'provides high-quality service at a reasonable price to Canadians, no matter where they live'."

The e-mail ends with a request for money, asking supporters to "help us stand up for ordinary Canadians."

What the Conservative fundraising pitch forgets to mention is door-to-door mail delivery was cancelled under their own government in 2013.

Sure, it's fair ball to criticize Trudeau's Liberals for flip flopping again on their promise to restore door-to-door mail delivery.

But criticizing the Trudeau Liberals for upholding the Harper Conservatives' widely unpopular cuts seems like an unusual fight for the Conservatives to pick. 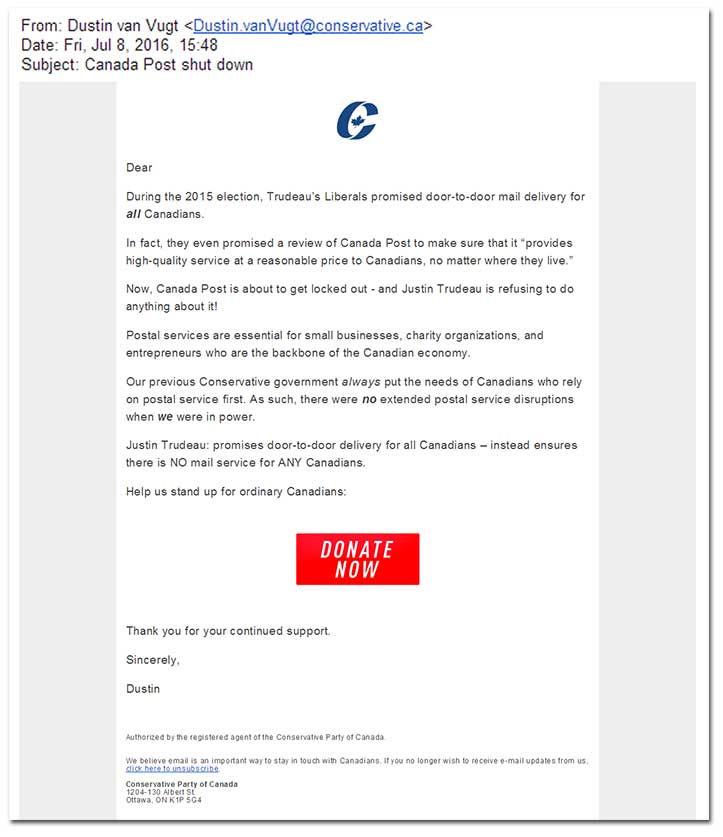 Another unusual thing about the e-mail is a line praising the economic benefits of Canada Post, particularly for small businesses, charities and entrepreneurs:

"Postal services are essential for small businesses, charity organizations, and entrepreneurs who are the backbone of the Canadian economy."

In other words, the Conservatives seem to simultaneously believe: (a) no one uses Canada Post anymore; (b) Canada Post is so "essential" that the economy can't function without it.

Got that? Make sense?

The e-mail also claims there was never any "extended postal service disruptions when we were in power":

"Our previous Conservative government always put the needs of Canadians who rely on postal service first. As such, there were no extended postal service disruptions when we were in power."

Except for when Canada Post's Conservative-appointed management locked out workers for two weeks in 2011.

Funny they don't remember that considering Ontario's Superior Court of Justice ruled their use of back-to-work legislation to end the lockout was completely unconstitutional.

Canada Post is not fighting workers over the future of mail, they're trying to weaken pensions

Conservatives vow to "stand up" for door-to-door mail delivery, except they axed that in 2013