Taxpayers could be feeling sour grapes after a Conservative cabinet minister was spotted mixing and mingling public and party business.

You might even say Michelle Rempel, Canada's Minister for Western Diversification ("& sommelier"), sunk to a brand new merlot for pairing official government business with a Conservative Party wine tasting fundraiser for an unelected Edmonton-area Conservative candidate at the end of June.

That's when Rempel showed up in Edmonton to make an official announcement in her role as Minister:

The official government event was even attended by Garnett Genuis, the unelected Conservative candidate for the new riding of Sherwood Park - Fort Saskatchewan:

But as it happens, that announcement was only an apéritif – quicker than you can pronounce gewürztraminer, Rempel was at an East Indian buffet house in suburban Edmonton raising money for Genuis, the same unelected Conservative candidate tweeting photos at her official government event.

"Mix and mingle with Michelle Rempel and local Conservative candidate Garnett Genuis," reads the promo for the $100 per head Conservative fundraising event, adding that attendees "will receive a tax receipt for $75 of the ticket price."

"Taste some of [Rempel and Genuis'] favourite wines and enjoy a fabulous Indian food buffet": 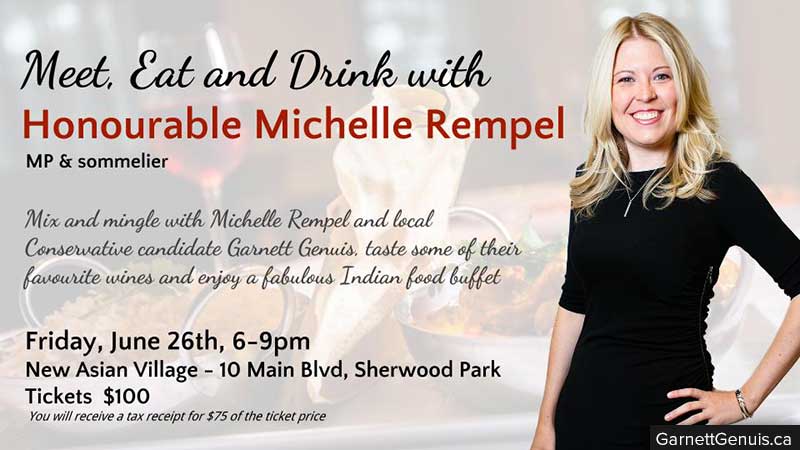 And evidently Conservative donors even learned a thing or two about Italian wines at the Genuis #wine fundraiser:

Genuis is formerly an assistant to the Director of Policy in Stephen Harper's Prime Minister's Office and ran unsuccessfully for the Wildrose Party in the 2012 Alberta provincial election.

Did Rempel expense taxpayers for the trip to Edmonton? Natural Resources Minister Greg Rickford, Employment Minister Pierre Poilievre and several other ministers have been observed blurring the line between public and party business before.

While taxpayers are still waiting for Rempel to disclose her expenses, piggy backing Conservative fundraisers on official government business would keep with the pattern Rempel's already established.

On the morning of April 16, Rempel spoke at the Western Innovation Forum 2015:

The next morning in Vancouver, before flying to Banff, Rempel hosted a fundraiser for the local Conservative electoral district association:

Fantastic turnout this morning for a fundraiser with the @Van_CentreCPC EDA. pic.twitter.com/0XnAFXrSTZ

Later that night, Rempel was spotted at a fundraiser for Conservative MP James Bezan:

The room is filling up at @jamesbezan's EDA fundraiser. The handsome chap in the front is my stepdad. pic.twitter.com/c7NmV2uW6K

Yep, last weekend's Conservative Party convention was even more bonkers than you think