Did the Premier of PEI just ignore a historic vote to adopt proportional representation?

Barely an hour after Prince Edward Island voted Monday to become the first province in Canada to adopt proportional representation, the Premier's Office had already released a statement sending signals MacLauchlan's Liberal government may choose to ignore the results of the non-binding plebiscite.

Then on Tuesday, MacLauchlan released another statement pointing to "low voter turnout" as a reason why it's "debatable" the vote "produced a clear majority":

"It is doubtful whether these results can be said to constitute a clear expression of the will of Prince Edward Islanders."

MacLauchlan's statement suggests that he will bring "this discussion to the floor of the Assembly" next week, though the statement offers few details elaborating further.

Monday's vote was an historic first that comes as the federal government is engaged in its own debate on electoral reform across Canada.

Since Confederation, PEI's legislature has swung back and forth between the province's old guard Liberals and Tories

Only one NDP and one Green MLA have ever been elected to the Legislative Assembly in the province's history. 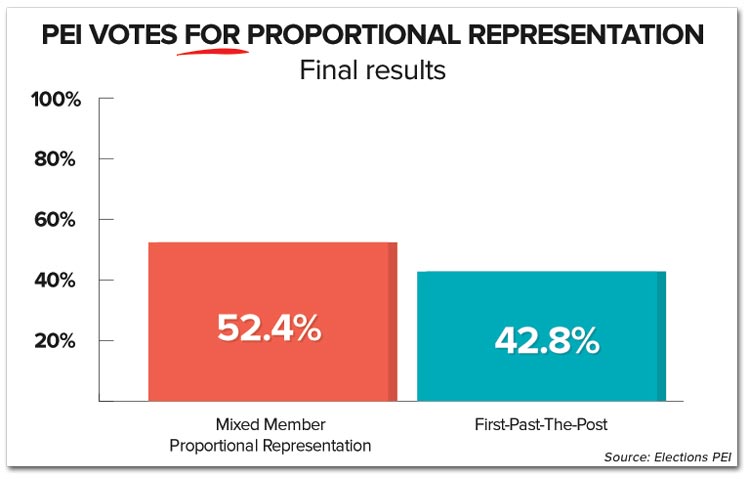 While it's true that the plebiscite's 36.5% turnout is lower than the 85.9% turnout rate during PEI's 2015 provincial election, the provincial government didn't complain about voter turnout following the results of another plebiscite in 2005.

In 2005, PEI held another plebiscite on electoral reform that saw a majority of voters choose to stay with the province's first-past-the-post system. Voter turnout was 33% – 3.5% lower than Monday's vote.

So what is the Premier's magic turnout number? While he admits he never recommended a "specific threshold for voter participation," he also floats the idea of "voter turnout of at least 50 per cent."

Except many municipalities regularly hold perfectly legitimate votes across Canada with turnouts lower than 50%.

And municipal elections in Charlottetown and Summerside often see voter turnout in the low 50s, far lower rates than during provincial elections.

Context: 36% of PEI turnout for electoral reform plebiscite.
Turnout in last month's Halifax municipal election was 30% and 2012 it was 37%

But if MacLauchlan thinks it's "debatable" that a 36.5% turnout represents a "clear expression of the will of Prince Edward Islanders" for change, does he see any signs that anyone is stepping forward to defend the status quo?

Only 11.3% bothered showing up to vote in favour of first-past-the-post.

In an editorial Tuesday, the Summerside Journal Pioneer called on MacLauchlan to "act on the will of the electorate":

"Now that it’s over there seems to be some of the opinion that those who chose not to cast a vote in the plebiscite were somehow content with the current system. If that is the case then it is very unfortunate for them. That is not how democracy is designed to work.

It's sadder too that the premier, following his statement Tuesday on the results, seems to share that view."

A week earlier during the lead up to the plebiscite, PEI's Guardian newspaper issued a blistering editorial declaring that the current system needs to go:

Under the current first-past-the-post system, PEI's legislature consists of 18 seats for the governing Liberals, 8 seats for the opposition Tories and one seat held by a Green MLA.

Under the mixed member proportional system voted for by a majority of Islanders on Monday, the 2015 popular vote would translate into 11 seats for the Liberals, 10 for the Tories, 3 for the Greens and 3 for the NDP. 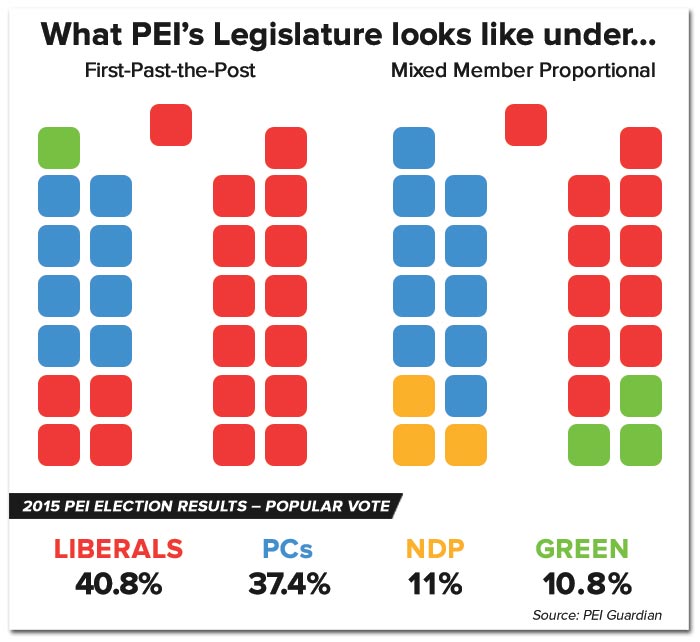 Conservative leadership candidate: climate change is not a 'scientific issue'

Did the Premier of PEI just ignore a historic vote to adopt proportional representation?